Measuring water flow to generating units at the 1,520-MW Manic-5 powerhouse, with the goal of maximizing unit efficiency, is a monumental task but the long-term benefits could help Hydro-Quebec customers and establish industry-wide benchmarks.

In 2013, personnel with Canadian provincial utility Hydro-Quebec performed penstock intake flow comparison tests to measure characteristics of the flow to its turbines at the Manic-5 powerhouse, part of the Daniel-Johnson hydroelectric facility, constructed between 1959 and 1970. Daniel-Johnson Dam is a multiple-arch buttress dam on the Manicouagan River that creates the Manicouagan Reservoir, 133 miles north of Baie-Comeau in Quebec, Canada.

The facility produces hydroelectric power and supplies water to the Manic-5 and Manic-5-PA powerhouses that have a combined capacity of 2,596 MW. The dam is 702 feet tall by 4,311 feet in length making it the largest dam of its type in the world and one of the company’s largest hydroelectric plants. 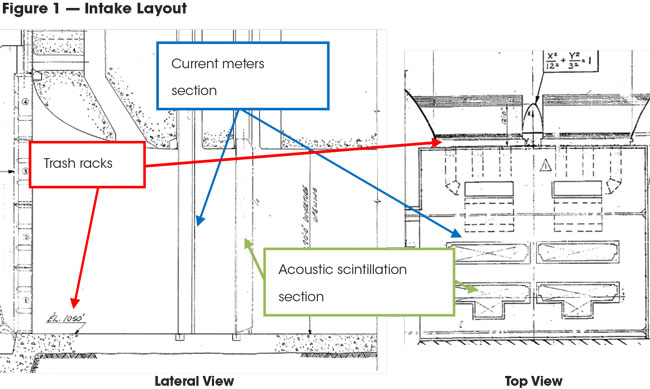 In their efforts to keep the total cost of the measurement tests as low as possible, engineers carefully considered flow measurement methods. Engineers consider the Manic-5 design intakes favorable and decided to use two types of measurements within the intake: the current meter (CM) and the acoustic scintillation flow meter (ASFM) methods.

Flow entering each penstock intake passes through two measurement systems after moving beyond the trashracks apparatus, but prior to reaching turbine-generators.

Hydro-Quebec’s CM method uses trolleys that support a single row of meters.1 The meters move vertically, allowing velocity sample profiles over the entire height of the measurement section. This set-up reduces the installation time because it can be used for flow measurement for as many as four units at this location (during the test, only one of the four units was operated). Even though flow measurement is traditionally considered difficult to perform within intakes, especially in a short converging intake, the measurement is proving accurate in many situations such as shown in Kootenay Canal comparative tests2 and showing many advantages over penstock measurement.2

Within the penstock and aft of the CM measurement system, engineers used an ASFM to measure discharge as part of a three-year partnership between Electricite de France’s General Technical Division (EDF DTG), Hydro-Quebec and the manufacturer of the ASFM, ASL AQFLow (the “SMASH” project).3

The main focus by partnership members studied ASFM in more detail and, depending on their findings, would possibly extend ASFM’s range of usage. As a matter of fact, the ASFM measurements from the Manic-5 study now serve as benchmarks for normal measurement conditions.

The power plant has eight 190-MW Francis turbines operating with a net head of 141.8 m (465 feet). Two sets of conduits each provide water to four units and each conduit has two rectangular bays, which converge into one circular section downstream from the head gates. The measurement sections are 10.97 m by 6.1 m (36 feet by 20 feet). The CM measuring section was located about 10 m from the trash racks in the stoplog slots, while the ASFM measuring section was 3.4 m farther downstream in the gate slots (see Figure 1). With only one unit in operation, the average velocity was in the range of 1 to 2.5 m/sec, which falls within the usual range of both the CM and ASFM.

The measurement conditions were considered good for both CM and ASFM. In effect, the smooth transition between the trashracks and the measurement sections is likely to produce smooth velocity profiles. The only concern were the trashracks cross members, which can generate large wakes. This has been taken into account in the selection of the number of ASFM measurement levels. The flow angle was expected to be near horizontal.

ASFM
ASFM uses a technique called acoustic scintillation drift to measure the flow velocity perpendicular to a number of acoustic paths established across the intake to the turbine. Short (16 µsec) pulses of high-frequency sound (in the order of 307 kHz) are sent from transmitting arrays on one side to receiving arrays on the other, at a rate of about 250 pings/sec.5

Fluctuations (known as scintillations) in the amplitude of those acoustic pulses result from turbulence carried along by the flow.

ASFM measures scintillations and from them computes the lateral average (i.e., along the acoustic path) of the velocity perpendicular to each path. In its simplest form, two transmitters are placed on one side of the measurement section and two receivers at the other. The signal amplitude at the receivers varies randomly as the turbulence along the propagation paths changes with time and flow.

If the two paths are sufficiently close (Î”x), the turbulence remains embedded in the flow, and the pattern of these amplitude variations at the downstream receiver will be nearly identical to that at the upstream receiver, except for a time delay, Î”t. This time delay corresponds to the peak in the time-lagged cross-correlation function calculated for Signal 1 and Signal 2. The mean velocity perpendicular to the acoustic paths is then Î”x/Î”t. Using three transmitters and three receivers at each measurement level allows both the magnitude and inclination of the velocity to be measured. ASFM computes the flow through each bay of the intake by integrating the horizontal component of the velocity over the cross-sectional area of the intake. In a multi-bay intake, the flows through each bay are summed to compute the total flow.

In addition to the normal ASFM, a high-speed data acquisition system was used to record the raw acoustic signal for each element. In total, 12 signals were simultaneously recorded at a rate of 3.3 mega samples per second) for each 7-minute run. Those data were used after the tests for an alternate post-processing analysis.

CM measurement set up
CM measurement was done with 14 meters installed on the bottom of a simple trolley made of two endplates, profiled rods and steel cables (see photos on pages 72 and 73).

The CMs were equipped with Type A self-compensating propeller that compensates for up to 45-degree flow angle. The profiled rods are the same that are used for calibration of the CMs. Steel wheels help guide the trolley in the gate slot both laterally and longitudinally. The frame was moved by means of two hoists controlled by variable-frequency power drives, which allowed selection of the travel velocity. The two hoists were synchronized by means of encoders. Two displacement transducers measured the elevation of each end of the trolley.

The trolley velocity was set to 50 mm/sec except at the top and bottom of the measurement section, where it was set to 10 mm/sec for better defining the rapidly changing velocity profile. Total measurement time was 8 minutes for each run. The trolley velocity for the profiling method represents about 2% of the average velocity at the lowest flow. The data acquisition software developed by Hydro- Quebec allows recording the instantaneous rotational velocity of each current meter, (i.e., it records the time stamp of each revolution). Once the rotational velocities are recorded, it is relatively easy to calculate the mean value for different time intervals.

Due to the presence of trashracks and a rigid and vibration-free support frame for the ASFM transducers, the conditions for ASFM testing were very close to ideal, meaning that all flow velocities were used in computing the flow (see Figure 2 on page 71). The velocity profile measured by ASFM shows small oscillations that are related to the trashracks cross members.

CM results show that the velocity profiles produced are similar to the ones from ASFM, with ASFM results slightly higher. The small difference (higher velocities in the bottom part of the measurement section) can result from the ASFM measurement section being farther downstream than the CM section, as the velocity profile tends to develop or flatten as the turbulence is mixing the different layers of the flow. A part of the difference can also be due to two other factors: the acquisition times for the CMs and ASFM are not concurrent and the sizes of the measurement sections of the two methods are marginally different.

The three-dimensional velocity profile (also Figure 2) from the CM measurement shows some asymmetry, especially in the bottom part of the section. It is likely due to the asymmetry of the intake upstream of the trashracks or the presence of some debris there. This asymmetry of the velocity profile in the bottom part of the measurement section can be the source of difference between the CM and ASFM methods.

Reprocessing ASFM data
Project personnel compared the standard time series computed by ASFM and the recomputed time series based on the recorded raw signals. They used a new algorithm to determine the amplitude of the acoustic pulses. This algorithm has already shown to improve the results of ASFM in case of very low turbulence3, which is not within the normal range of usage of the method.

This new algorithm is not expected to have a significant effect on the calculated flow under normal stipulated conditions of usage of ASFM. 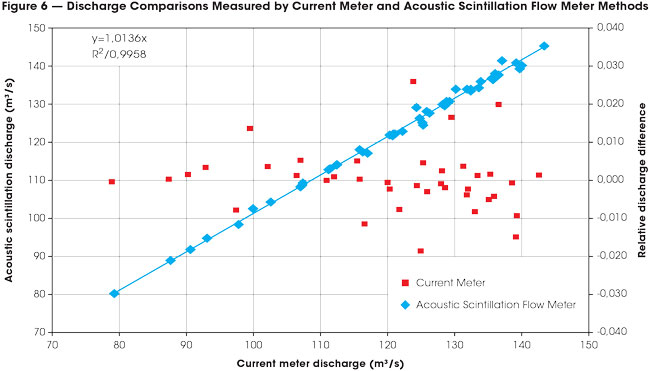 Figures 3, 4 and 5 (see pages 72, 73 and 74) show a very high resemblance between the two time series, which leads to close values for the total flow. The quality factor of the measurement, for each individual level5 was above 0.9, thus a high degree of confidence in the ASFM results.

From the eight runs reprocessed with the new algorithm, the difference from the original calculation is 0.35%, which is low. As expected, the difference for the present tests is not large, unlike what was found for low turbulence level tests. The new algorithm will be tested more thoroughly in future ASFM comparison tests as Hydro-Quebec, EDF and ASL AQFlow continue to collaborate on this matter.

At peak efficiency, the difference between the eight units reaches 0.3 % and will be taken into account for optimal dispatching. There is also some difference between the powers at peak efficiency, which will also be taken into account for turbine set up. In addition, for turbine output toward the maximum values, the difference of efficiency reaches 1.5% between the most and least efficient units. Again, knowing this fact will help Hydro-Quebec to properly operate its units, because they are often used during high load periods.

Hydro-Quebec has performed efficiency tests in the intake of one of its major power plant. The goal of those tests was to measure the efficiency of all eight units for optimal dispatching. It was also a good opportunity to perform comparative test between two methods, CM ASFM.

Significant differences exist between each unit at peak efficiency and near maximum power.

The results of those tests will help Hydro-Quebec to better operate this plant.

Several methods exist to measure absolute water flow rate in hydro plants, some of which include the current meter, pressure-time (Gibson), tracer and ultrasonic methods. The newest is the ultrasonic method and it is being applied more frequently at hydro plants because it allows for continuous monitoring of the flow rate. However, the basic flow measurement methods used for efficiency tests of hydraulic machines are the current meter and Gibson methods.

The current meter method has frequently been applied at hydroelectric facilities. Another possibility for continuous measurement of the discharge is the non-absolute Winter-Kennedy method.

Bertrand Reeb, P.E., is a test engineer with Electricite de France’s General Technical Division. Guillaume Dubois and Gilles Proulx are engineers in the testing department with Hydro-Quebec. Ion Candel, PhD, is a research engineer and Cornel Ioana, PhD, is an associate professor researcher with the Grenoble Institute of Technology/GIPSA-lab in France.