As the first step in fixing a problem is defining it, understanding the stressors that can lead to a failed or damaged stator winding is important to keep downtime and costs low.

For hydro project owners and operators, the cost to replace a generator stator winding is considerably less than the lost revenue associated with the downtime required to replace one that has reached end of life or has failed in service. Thus, it is valuable to understand the various stator winding aging stressors that may or may not contribute to loss of life and the associated synergies.

It generally is known and accepted that for stator windings, the primary end-of-life failure mode is associated with insulation failure occurring due to deterioration at or near the copper conductors in the front half of coils that are operating at or near line potential. This deterioration usually results in an in-service failure of the winding.

The temperature drop from copper surface to groundwall surface (for indirectly cooled windings) is somewhere between 10 C and 20 C. Thus, the hotter insulation adjacent to the copper ages about twice as fast as the average of the groundwall insulation. This partly explains why most multi-turn windings fail turn to turn and, upon dissection, why most of the groundwall insulation is usually in significantly better condition than the insulation nearest to the copper. It also partly explains why single turn windings on average last considerably longer than multi-turn windings.

A specified insulation class, such as temperature Class F, means the insulation system will not lose more than 50% of its original mechanical strength after operating at the rated maximum temperature of 155 C for 20,000 hours (2.3 years). (The standards say nothing regarding initial bond strength.) If a particular insulation system exceeds the hour or temperature expectations but does not meet the next higher temperature class (Class H), it can only be classified as a Class F system. However, this insulation may perform better than an insulation system that only just meets the Class F requirements.

Operating a unit at a hot spot temperature of 155 C does not mean the insulation will only last 2.3 years. This is simply the 50% loss of strength point, not end of life. Many machines also are not operated 24/7 at full load and are operated at much lower temperatures. This extends winding life. In the author’s experience, many of the hydro machines owned and operated by the U.S. Department of Interior’s Bureau of Reclamation have a typical operating capacity of 40% and operate at maximum resistance temperature detector (RTD) temperatures of 80 C to 90 C at maximum load. Reducing the load slightly further reduces operating temperature and greatly reduces the rate of thermal aging. In performing an insulation system assessment, two critical bits of information are hours the machine operated at full load and the full load RTD temperature. Often, many machines with long calendar lives have both low hours and temperatures at maximum load.

Mica and glass materials used in insulation systems are not affected by PD or high temperatures. However, dissection of a deteriorated coil usually reveals ground-up mica and glass. This is due to the mechanical pounding that occurs between the copper conductors and the insulation once resin volume decreases and associated adhesion is lost or reduced. This almost always occurs in the conductors and turns closest to the air gap, where the mechanical forces are greatest.

Insulation delamination due to the difference in thermal coefficients of expansion between copper and insulation is of concern to many. Manufacturers are reluctant to discuss matching thermal expansion coefficients. However, there have been some inferences that somewhat flexible epoxies and fillers are used to address differential thermal expansion stress and to prevent cracking. A Siemens paper states its insulation “… systems use a mica material capable of withstanding high electrical and thermal loads, together with curable, elastic epoxy resins as bonding material.”3 No solid evidence, research or proof that significant differential thermal expansion-related aging occurs could be found in the literature.

While some consider unit cycling, start/stops, and the resulting differential thermal expansion forces between copper and insulation to be a major aging factor, there is less than adequate evidence to support this belief.

In some coil failure dissection/analysis reports, cycling is frequently and erroneously cited, with little to no scientific basis, as the cause for the observed delamination. During a dissection, it is not always easy to distinguish the difference between delamination and weakly bonded layers of insulation. Sometimes, what are observed to be delaminations are really extremely poorly bonded tapes. Further, in many dissection reports, little to no information is provided as to the thermal age of the insulation. The hours at or near full load and the corresponding RTD temperatures are most important in the dissection-related analysis.

The author’s experience at Reclamation indicates generators that are frequently subjected to start/stop cycles seem to last as long as units that are not extensively cycled. This observation is supported by others. For example, in a joint research investigation article, the authors state, “Aging is not dominated by electrical stress, but rather by the combination of different stress factors, of which thermal and mechanical wear are the most important.”4 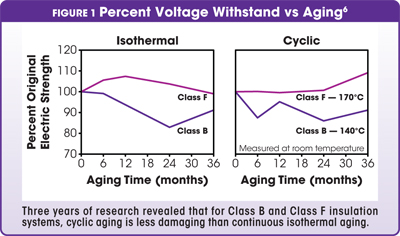 For this research, one set of bars was isothermally aged at 170 C for three years, and one set was cycled 12 times a day from 40 C to 170 C over a three-year period, for a total of about 13,000 cycles (which corresponds to two cycles daily for 20 years). The bars were maintained at 170 C for 30 minutes during each cycle.

Regarding actual hours loss of life due to starting and stopping a unit, a major winding manufacturer position in the mid-1980s was that a winding would lose 16 hours of life for each start/stop cycle. This number does not sound reasonable. For example, the 105 MVA Mt. Elbert pump-generating units (74-inch core length) have been stopped and started once or twice a day for 26 years (roughly 33% duty cycle at full load). Respectively, these units have experienced more than 6,600 and 9,100 starts. Based on the 16-hour loss estimate, these windings should look or test like windings that were operated at 33% duty cycle for 58 and 74 years. Therefore, the 16 hours loss life per start/stop estimate is by no means reasonable, as the windings are far from end of life.

Generators started and stopped frequently (more than twice per day) probably see reduced thermal cycling. Thus, the number of cycles and start/stops are not always cumulative. This is due to the thermal cooling time constant associated with the mass of the frame, core and winding.

Another point often made without merit is the concern that during a cold start, damaging thermal expansion-related shearing forces develop due to differences in the coefficient of expansion between copper and insulation. The magnitude of this stress is proportional to the associated temperature differential imposed across the insulation and the actual temperature of the insulation at the time of the start. Regarding both of these factors, several laboratory investigations have shown that there is considerably less shearing force developed during application of a step increase from zero to rated current than during normal operation, and this increase is due to the high specific heat capacity of the copper conductors.

Data shown in Figure 2 and taken from a paper on accelerated life testing illustrates this key point.6 The coils were in a mock steel core with cooling vents, forced cooling fans, packing and wedges. As can be seen, a step increase of rated current results in a considerable time delay for the copper to reach steady state temperature. The plot shows the thermal expansion-related stress is a maximum at the high temperature steady state full load operating point. 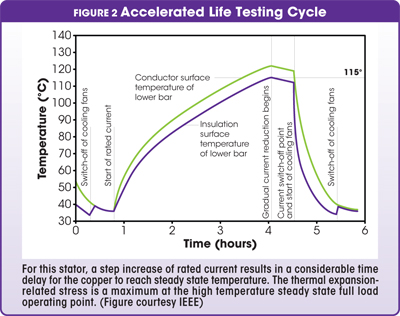 These test bars were installed in a frame and laminated core mock-up also with vents, forced cooling, slot packing and wedging. The temperature rise period during heating was similar to a machine in service. However, the forced cooling cycle was considerably shorter than what occurs in service and, thus, more stressful. Maximum copper temperature was set to be 20 C higher than would occur during normal service. This resulted in a 30 C drop across the insulation, rather than the typical 10 C to 30 C drop that occurs in service. The bars were subjected to 60 days of full load cycling (4,324 cycles). This is about 12 years involving daily start/stops. Average shear strength test results (to push four strands out of the consolidated bar) were 4 Newtons per mm2 or 9,000 lbs/inch2, which was 15% less than for a new bar and in accordance with the manufacturer’s predicted value. There were no tape separations, voids or delaminations found during dissections.

Multiple stressors must work in synergy to create the condition necessary for the subject failure mode to occur. The front leg of the coil is the typical failure location due to the radial mechanical forces being three times higher in the front half of the coil and, to some degree, to the greater tangential forces on the front turn of the front coil leg and the higher eddy current losses in the conductors closest to the air gap. Thermal aging over time weakens the insulation bonds and reduces binder volume. This allows voids to form but by itself does not lead to this failure mode, as dissections of lower voltage coils in machines reveal the thermal aging to be about the same in both coil legs.

Voltage stress also contributes to the failure once large enough voids are formed, but by itself this factor is not primarily responsible for this failure, as the voltage stress is about the same in each leg of the subject coil. PD-related damage is greatest in the front coil of higher-voltage coils and, thus, is a major stressor, but only in conjunction with thermal deterioration and the follow-on mechanical-related deterioration. Furthermore, windings that are frequently cycled appear to last as long as windings that are not subjected to frequent cycling. Observations from dissections, in general, tend to indicate that thermal aging must be significant before radial forces and PD can become dominant aging stressors.

1. Once thermal aging significantly weakens the strength of the insulation, the mechanical conductor forces become a significant aging factor, further damaging and displacing the insulation around the conductors. About the same time, voltage-related aging (PD) accelerates considerably due to the voids generated from loss of weight (thermal decomposition of the binder). In the majority of windings, the mechanical bonding and the plastic nature of the resin prevents delamination from occurring until thermal aging reduces the bonding strength.

2. Over the years, there has been a growing body of knowledge associated with aging processes, test methods, databases, refined investigations and analysis methods, etc. During this period, no evidence of start/stop-related aging has come to light, which supports the conclusion that start/stop stress is not a significant aging factor.

Bert Milano is an independent consultant who worked for tfhe U.S. Department of Interior’s Bureau of Reclamation in the Electric Power Research and Technical Services Branch for 35 years. His primary responsibility and expertise was associated with generators and generator insulation systems and involved inspections, testing, diagnostics and assessment.