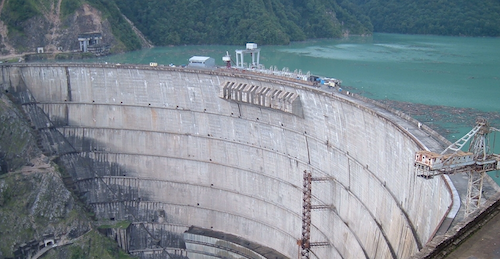 Georgia’s Ministry of Energy has temporarily stopped generation at the 1,250-MW Enguri hydroelectric plant while the operator works to correct issues with the project’s diversion pressure tunnel.

According to the ministry, work is expected to take two weeks from the time Engury was taken off line February 19, and will allow for the identification of leaks and planning for a rehabilitation of the tunnel.

The tunnel project is part of a larger rehab effort, which is being coordinated by the European Bank for Reconstruction and Development. EBRD issued a tender in January to execute a fourth phase of rehabilitation, which includes work on Enguri’s headrace tunnel, electromechanical works, repairs of penstakes and gates, sediment management and more.

Enguri is located on the river of the same name. The project was built in the 1970s as part of a scheme that also includes the Vardnili hydroelectric cascade. Enguri was poorly maintained and operated at a reduced capacity after a period of civil war in the 1990s until rehabilitation efforts began in the mid-2000s.