With everything HydroVision International 2013 has to offer, navigating the world’s largest hydroelectric power event might seem overwhelming.

Official media partners Hydro Review, HRW-Hydro Review Worldwide and HydroWorld.com have made it easier for attendees to get the most out of their visits to Denver, however, by introducing a companion app for Android and Apple iOS devices.

The app is free and available for download from the Apple App Store and Google Play.

The HydroVision International 2013 information is an addition to the Hydro Review news app, though users must update their apps in order to access the new section. 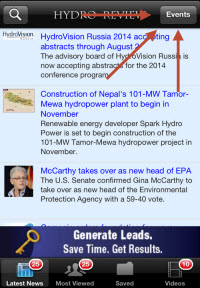 Once updated, users will notice a new icon in the upper right-hand portion of the screen that says “Events”, which will open the new HydroVision International 2013 material.

There, users will find an interactive floorplan, conference sessions, full information about every HydroVision exhibitor, details about co-located events, product listings and more.

“The app is a great tool for HydroVision newcomers and veterans alike,” HydroWorld.com editor Michael Harris said. “It has all the information included in the printed conference guide, but allows users to access it in a faster, more intuitive way.”

“The app pulls tweets marked ‘#HydroVisionIntl’, making it a great way for exhibitors and speakers to let everyone know what they’re doing while in Denver,” Harris said.