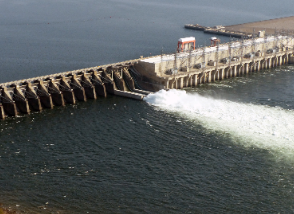 The Grant County Public Utility District has unanimously agreed to condemn and purchase for public use 2.9 acres needed to rebuild the right embankment of its Priest Rapids Dam.

The embankment, on the Yakima County side of the Columbia River, is being rebuilt for seismic resistance. Construction is expected to begin this year, and the project is reported to cost about $50 million.

The new embankment must extend across the property to access the bedrock below.

The condemnation was approved as a precaution, but Grant PUD General Council Mitch Delabarre said the condemnation would likely not be necessary because the property owner and Grant PUD have since agreed to terms of sale.

In a meeting earlier this month, Managing Director of Power Production Rich Wallen reported that there is a need to anchor the monolith at Priest Rapids, where leaking was discovered last year. At that time, investigations determined the issue was the result of a disbanded lift joint.

Drainage holes were drilled into the affected monoliths on the spillway to reduce the pressure in the leaking area, and monitoring equipment was installed throughout the spillway.

Permitting and other pre-work steps still need to be completed before the final scope for the project is finalized.

Priest Rapids Dam is 10,103 feet long and was completed in July 1956. It impounds water for a 955.6-MW hydroelectric powerhouse.