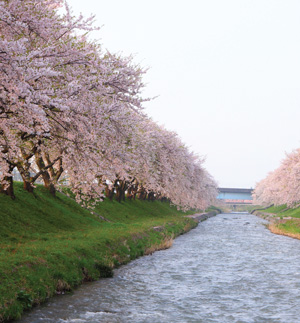 The addition of hydropower generating capacity to an irrigation network in northern Japan is one step closer to completion. Several sites have been identified for the installation of VLH turbines, with a total capacity of 1.433 MW.

Japan has about 20,000 km of irrigation networks with appreciable flow capacity and numerous smaller systems. These higher-flow networks are well-designed and maintained, making them suitable for small hydroelectric generation capable of operating at very low heads. The introduction of the feed-in tariff scheme for renewable energy, including small and medium-scaled hydropower, in 2012 created the potential for such developments on irrigation networks.

The project started in 2012 with a detailed survey by Japan NUS Co. Ltd. (JANUS) of 50 potential sites at drops in a 25 km-long irrigation network in northern Japan. Figure 1 shows the mean monthly flow variation for three locations within the network. JANUS then selected MJ2 Technologies as the strategic supplier because of the flexibility of the VLH turbine concept, minimal footprint required, matching flow and head range, and willingness of MJ2 to collaborate openly on the irrigation application.

Then, an initial engineering investigation phase was undertaken by JANUS and MJ2 to select the preliminary sizing of the VLH turbine (see sidebar on page 20) to be used considering the canal section and available flow. The VLH turbine can generate electricity with heads below 4.5 m. The sites are constrained by valuable agricultural fields and orchards, which required a second engineering investigation to reduce the development footprint of each site. JANUS and MJ2 worked with the local irrigation administration and adjacent landowners to refine the design criteria based on the requirement for secure flow continuity and minimal loss of agricultural lands. An important improvement of the project feasibility would be to consider the possibility to produce electricity year-round. The VLH is well-suited for this application, being able to operate at a very low partial flow of less than 2 m3/s with a relatively flat efficiency curve.

With this decision, the layout configurations were reduced to: with a flow bypass or without. The without configuration was investigated and two scenarios were considered with a top flap gate capable of instantaneous bypass of the flow and a system that involved the fast removal of the VLH, both of which MJ2 has experience with.

1A. Respecting the channel’s width and reducing the turbine size, nominal flow, nominal output and expected production. This option reduces the area affected by civil works and the need for land. It also reduces production capacity but does not avoid structural review of the main channel concrete works to assess whether the location can support installation of the turbine without structural reinforcement.

1B. Widening the channel at the turbine location to install the most suitable turbine size from the VLH standard range. Civil works will be more important and agricultural lands will be slightly affected. The VLH cost will be higher but the cost per installed kW will be lower, resulting in higher production and profitability. However, the civil works design and execution is simpler and less expensive to rebuild the area of the main channel to incorporate the VLH.

1C. Fit the side bypass with a regulating gate or flap gate to reduce the overall length of the intake. However, this scenario inserts electromechanical risk related to the potential failure of components interrupting the passage of flow downstream.

Configuration 2: Without a flow bypass channel
These configurations consider using electromechanical means to pass the irrigation flows in the case of an outage, which is less secure from an irrigation flow management point of view but would reduce civil works costs by eliminating the bypass channel. A flap gate, bottom gate and fast removal system were considered, with the bottom gate later removed because the general configuration would not allow a high enough flow passage. The two alternatives considered are installations MJ2 has experience with and are considered to have a high level of reliability. Although these solutions bring the best cost per installed kW and the smallest footprint, they introduce a high level of dependence on electromechanical devices and a potential conflict with respect to continuity of the irrigation flow.

2A. Flap gate configuration. This involves installation in the main channel with a top flap gate, high enough to allow the irrigation flow to pass over the VLH in case of an outage. This is the simplest and most reliable solution. It reduces risk of interruption of the flow passage, but the low-cost maintenance access to the turbine-generator group relies on the lifting system.

2B. Fast removal configuration. This involves installation in the main channel with a fast removal system that lifts the VLH out of the flow in less than an hour.

Considering a system application
In parallel with the discussions regarding adequate layout of the power plants, a survey was carried out to complete a detailed inventory of the sites and an optimization analysis. Of the 50 drops first identified, 35 were further studied later in 2012. Their main dimensions were measured, land and agricultural uses were inventoried, distance to the grid was established, and site access was determined, with all the information compiled in a site inventory.

Over the next six months, JANUS initiated consultation with the Ministry of Agriculture, the owner/operator of the irrigation network, along with the irrigation system users/farmers/adjacent land owners to explain the project and assess potential impacts, difficulties and design constraints. This review resulted in the next short-listing of 11 sites for further study.

For all VLH turbines, the model number corresponds to the turbine diameter in millimeters. The VLH DN 3550 and VLH DN 3150 were chosen because the overall width of the VLH was consistent with the existing channel width. Due to the smaller VLH sizes, only a portion of the flow is used for generation, with the excess flow passing over the turbine or through the side bypass channel.

In the second stage of the ranking and selection process, the VLH sizes were increased to VLH DN 4000 and VLH DN 3550 in the channels where they would fit. The sites with construction difficulties and the inability to adapt the larger optimized VLH size to the channel width were eliminated. Site 6 was put on hold because of the proximity of a valuable chestnut tree plantation.

The total installed output remains close to the first evaluation despite the elimination of two sites. The proportion of total flow that runs through the turbines was increased, again due to the larger VLH sizes.

In the final review of the second stage, Site 15 was removed because of civil works difficulties associated with raising the channel side walls, and Site 6 was reintroduced when a solution was established to avoid the chestnut plantation. The VLH size for all sites was increased to the VLH 4000. Site 13 remained questionable because of the choice of the VLH DN 3550, with further investigation required to clarify whether it is possible to install a VLH DN 4000 by enlarging the channel at the turbine location.

The final six sites selected consider only two turbine models, with an investigation under way to see if only VLH DN 4000s can be considered across all the sites.

Conclusion of initial investigation — Configuration and staging of development
The design configuration selected was a side channel spillway to a bypass channel because the owner was not comfortable with sophisticated electromechanical devices, such as fast turbine lifting systems or flap gates. The bypass channel would have to be buried under the adjacent road to avoid any loss of agricultural lands.

This solution is not the least expensive option but because the project is the first of its kind in Japan, it was necessary to choose the most conservative layout and to carefully observe the irrigation network manager’s concerns.

A final list of six sites has been defined for the first phase of implementation, with a second phase of eight more sites to be built. The first phase will consist of five VLH DN 4000 machines and one VLH DN 3550 turbine, with supporting structures installed on removable steel structures in the canal drops. Each site will be fitted with the side channel spillway bypass system with a fixed regulating weir section able to pass 100% of the maximum canal flow. The national water supply regulator is currently reviewing the first phase considering the private use of the publicly-owned irrigation canal.

The first phase will have an installed capacity of 1.433 MW and will cost about €7.2 million (US$10 million) and result in estimated annual production of more than 4.3 GWh sold through the Japanese FIT price to create a turnover of €0.9 million (US$1.25 million).