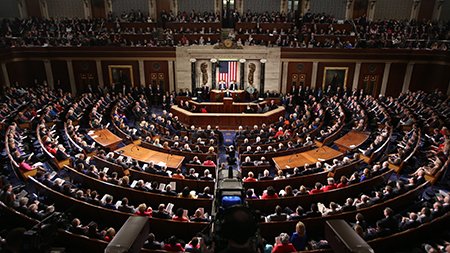 The U.S. House of Representatives has unanimously approved a pair of bills that would promote the development of qualifying pumped storage projects and addition of hydroelectric capacity to existing non-powered dams.

The first, called the Promoting Closed-Loop Pumped Storage Hydropower Act (House Resolution 2880), would limit the Federal Energy Regulatory Commission’s authority to enforce licensing conditions for closed-loop proposals “only as necessary to protect public safety”, or in instances “that are reasonable, economically feasible, and essential to protect fish and wildlife resources.”

The bill was introduced by Rep. Morgan Griffith, whose state, Virginia, could benefit significantly should the legislation be enacted by virtue of a pumped storage facility being pitched by Dominion Energy for the state’s southwestern coalfield region.

According to a Dominion report released earlier this year, the project could cost as much as $2 billion and create more than 2,000 jobs through 2027.

“This technology is a job creator and an asset for a true ‘all of the above’ energy policy,” Griffith, a member of the Republican Party, said. “I have promoted it as a great idea for the Virginia coalfields because we have the infrastructure ready to support closed-loop pumped storage projects, but sites around the country would benefits from these projects as well.

“My bill makes the process of licensing them easier, and I hope today’s vote will serve as an encouragement to companies looking at closed-loop storage, whether in or out of a mine.”

The second proposal, called the Promoting Hydropower Development at Existing Non-powered Dams Act (H.R. 2872), would establish an expedited licensing process, resulting in decisions on applications in two years or less.

The bill would also require FERC, the U.S. Army Corps of Engineers and the U.S. Department of the Interior to develop a list of existing non-powered, federally-owned dams that have the greatest potential for private sector hydropower development.

“Back home in Indiana, there are six non-powered dams located throughout the 8th district that could benefit from an expedited permitting process that promotes hydropower generation and provides quality Hoosier jobs,” said Rep. Larry Bucshon, R-Ind., who introduced the bill. “Streamlining the permitting process for qualifying non-powered dam projects represents an important first step in modernizing our energy infrastructure.”