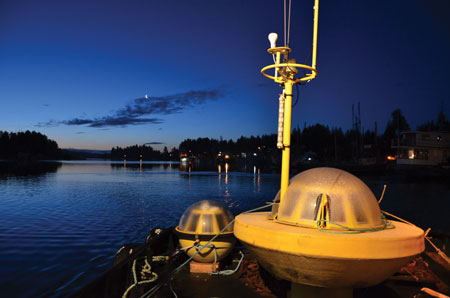 By Helen Bailey and Bryson Robertson

The full-scale deployment of wave energy converters (WEC) in real ocean conditions is the ultimate end goal of the technology development work currently occurring. Getting a full-scale unit in the water is the final stepping stone to validate and confirm the power production of a specific WEC in kilowatt-hours, as well as the associated costs to produce electricity. These are necessary values to support market penetration and investor confidence.

However, full-scale deployments are expensive and risky. Dedicated funding for this project stage can easily run into many millions of dollars, and this expenditure does not guarantee a return in terms of electricity production.

To mitigate the risks associated with WEC testing, a strategically designed development pathway should be followed. Building scaled or reduced-size WECs to test in a wave tank, or open-ocean testing in benign wave climates with a scaled WEC, is an important part of a strategic development pathway. However, the relentless pursuit of wave tank testing by some developers in this industry, (which can typically cost C$35,000 to C$110,0001 for a testing phase), has resulted in missed opportunities to accelerate the technology development process, at lower costs, through the use of numerical simulations.

Numerical simulations have the potential to provide complete high-fidelity knowledge of system dynamics, allow rapid design prototyping and accelerate design iteration. They can represent the full-scale prototype in its final deployment location and environment. Given the proportionally lower costs associated with numerical simulation, it is strategically advantageous to have a numerical simulation program running in parallel with the experimental modeling test program, with the results from both programs feeding into and informing the design process.

At the West Coast Wave Initiative (WCWI) based at the University of Victoria, Canada, our focus is on providing high-fidelity numerical simulations of WECs. Numerical simulations use full directional wave spectra and a complete suite of environmental conditions to predict the dynamic response of the WEC and the associated power flow into the electricity grid. WCWI maintains ocean monitoring equipment, to measure necessary driving forces for WECs, and an in-house experimental WEC model for advanced study.

A fundamental building block of accurate numerical simulations, or experimental models of the WEC, is detailed information regarding the wave climate and other environmental factors (i.e., wind, currents, tidal variation, etc.) at the proposed deployment location. For the Canadian Pacific region, WCWI compiles the necessary dataset through a combination of four AXYS Technologies wave measurement buoys and a full spectral wave propagation numerical simulation (Simulating WAves Nearshore or SWAN). The buoy measurements and the SWAN simulation results are initially parameterized according to technical specifications from the International Electrotechnical Commission.

The buoys provide high-resolution point measurements of wave conditions, while the numerical wave propagation model provides the necessary spatial detail to identify potential marine energy deployment locations. These two measurement systems are essential to be able to predict how much energy can be annually recovered and the temporal variance of this power. For example, there is limited value in increasing the WEC power production for one specific sea-state, only to find out this sea-state rarely occurs. The final WEC full-scale architecture must be designed with the deployment location and associated environmental conditions in mind.

The open-source SWAN wave propagation model at WCWI simulates the wave conditions around the west coast of Vancouver Island, British Columbia, Canada. The model domain covers about 400,000 km2 and extends from the coastline of British Columbia to the continental shelf. It uses global wave and wind models from the European Centre for Medium Range Weather Forecasts (ECMWF) for its deep-water boundary conditions.

The ECMWF global wave model runs at a spatial resolution that is too coarse for identification of WEC deployment locations and applies an assumption of deep water for the water-wave mechanics. The WCWI SWAN model uses these global model values as boundary conditions and propagates the wave action density though the simulation domain. In WCWI’s case, this occurs with increasing grid resolution as the water depth decreases or the sea floor slope increases. In potential WEC deployment areas, the grid resolution is about 50 m resolution. The model computes the full directional wave spectra every three hours for the past 12 years, along the entire west coast of Vancouver Island (about 120,00 computational grid points).

Four AXYS Technologies wave measurement buoys are deployed at strategic locations within the SWAN wave propagation simulation domain. These provide the necessary validation points for the numerical simulation and the exact wave climate, winds and currents for the location of interest. While the wave measurement buoys give a precise measurement of the wave characteristics at a single location, the numerical SWAN model provides the spatial variability in these characteristics, due to the changing bathymetry, localized current, refraction and diffraction effects. Knowledge of the wave climate along the entire coast is used to determine ideal deployment locations for full-scale WECs and the wave climate at these locations.

Ultimately, WEC developers and investors want to know how much energy a WEC will produce, the cost associated with that energy and how to increase the value of the recovered energy. Predictions of these metrics can be achieved though scaled sea trials, experimental wave tank testing and numerical simulations (see Figure 1).

Scaled sea trials are a vital step late in the development pathway. Although sea trials are more costly than numerical simulation (predicted at about C$1.5 million to C$3.5 million dollars1 for a European test site), they provide unique insights into the WEC performance, deployment techniques and design robustness. A WEC that is typically one-half or one-third the size of its final intended size can be tested in a benign ocean site, where the waves are appropriately sized (i.e., smaller). Finding a location can be difficult, as both the height and period of the waves need to be appropriately scaled as does, ideally, the water depth, directional spread of the waves, wind and any currents. Scaled sea tests provide no control over the exact wave and environmental conditions.

Testing WECs in wave tanks allows for a more controlled environment and would strategically occur earlier in the design process than sea trials. The scaled models tend to be smaller, typically between 1/50th and 1/5th of the full size. This depends on the capability of the wave tank and the intended size of the final WEC. Scaling dimensions of the experimental model means that the lengths reduce by a geometric scale and the ratio of chosen dominant forces remain constant (similarity of forces). Froude number scaling preserves the ratio of inertial to gravitational forces. Froude scaling is typically used for WEC wave tank testing, ships and other offshore structures, as waves are gravity-driven. However, viscous effects like turbulence and wave breaking will not scale correctly. Additionally, it is very difficult to provide the correctly scaled material properties, particularly for the mooring lines.

A power take off (PTO) uses the relative motion between WEC bodies, the seabed or partially enclosed bodies of water to generate power. These are typically a hydraulic system of valves, cylinders, accumulators and motors; a wave-air interface with pressurized air driving a turbine; a pneumatic system; or a directly driven linear generator. Under scaling laws for a typical WEC that has a capacity of 200 kW, a 1/20th scale WEC would generate a tiny 6 W. Hence, being able to physically scale the final full-scale PTO system is virtually impossible (i.e., developing a hydraulic system with valves, accumulators, a variable speed motor and a generator that acts exactly like a scaled full-scale system, but only generates 6 W).

Attempting to replicate a full-scale PTO using a representative PTO with this power level is challenging and may not match the intended PTO’s responses. Frictional effects, in the PTO or elsewhere, become significant and can dominate resulting signals. Additionally, due to space constraints within experimental facilities or the issues associated with using scaled moorings, the degrees of freedom that the experimental model is allowed to move are limited (i.e., a 6-degree of freedom WEC system is often tested with a scaled, single-degree of freedom system). This introduces additional friction from restraining the model and limits the applicability of the resulting knowledge for the final system design. It is not unusual for an initial scaled WEC experimental setup for the WEC to be barely able to move due to excessive friction.

To compliment physical testing regimes, numerical simulations can overcome many of the limitations of scaled sea trails and wave tank testing. Numerical simulations can directly model the different forces and associated rotational moments (torques) acting on the WEC hull. These forces and moments result from incoming waves, the WEC interacting with the waves, the PTO, the moorings and other environmental effects. Within a numerical simulation, similar to those WCWI tests, all the dynamic interactions of separate WEC hull components are included. These forces and moments act in 6 degrees of freedom and excite motions of one or more WEC Hull components.

Within WCWI, the PTO is typically modeled using hydraulic cylinder accumulators and motors, a thermodynamic and turbine model or a direct-drive linear generator. The PTO system can easily be changed and altered as required and appropriate. The efficiencies, inertias and losses for specific PTO systems can be simulated and quantified. Additionally, specific control strategies can be applied to the PTO to improve the WEC performance.

Within numerical testing, the detailed measurements and models of the wave conditions are used as inputs to the numerical model and the annual energy recovered, and the variability of the energy, are calculated as outputs. Once validated, the entire WEC system numerical simulation can be used to accelerate the WEC design iteration cycle through full system optimization tools, control strategy investigations or simply testing design ideas. Additionally, a numerical simulation can quickly alter the deployment location wave characteristics and water depths, to determine the performance of a WEC design in alternate markets. While numerical simulations provide a significant ability to better understand WEC dynamics and aid in the design cycle, they must be used with the understanding that numerical simulations, like scaled experimental testing, rely on some baseline assumptions. Turbulence is often ignored as it is difficult to model (this can be modelled using highly computationally intensive CFD or computational fluid dynamics). Drag coefficients must be obtained from analytical solutions, experimental testing or approximate shapes. Additionally, there are a number of assumptions regarding the summation of wave forces and how the waves and WEC interact.

As noted, numerical models, sea trials and wave tank testing all are limited to some extent and none, in isolation, will provide the necessary information to mitigate the risk of full-scale WEC deployments. A combination of numerical simulations and scaled experimental models are useful before a full-scale prototype can be deployed in the ocean. As noted by the IEC Technical Specifications, the assessment of the wave climate needs a wave propagation numerical model to quantify the wave resource at the potential deployment location, yet requires a parallel wave measurement buoy program. Similarly, numerical WEC simulations and scaled tank tests should be run in parallel to improve the WEC design, estimate power performance and provide cost efficiency.

Numerical simulations provide a quick, cheap and repeatable method to explore the WEC dynamics design space and accelerate the design process. Scaled wave tank experimental testing, especially at smaller scales, is simply unable to model the whole system due to scaling limitations. However, they can provide unique datasets, provide proof-of-concept testing and give an approximate estimate of motions and power recovered.

Helen Bailey, PhD, is technology modeling group lead and Bryson Robertson, PhD, is the project manager within the West Coast Wave Initiative, located within the Institute of Energy Systems at the University of Victoria, British Columbia, Canada.