HydroVision International is a great place to make connections to the hydro industry: “I come to HydroVision because in one place, you can have all the stakeholders present worldwide and you can network with the people and learn a lot in terms of technical approach over key issues for hydro plants in the world,” says Emmanuel Branche with Electricite de France. “Thank you HydroVision for this opportunity to meet all the people and keep in touch with the high level individuals in the industry.”

Visit www.hydroevent.com to learn about the three keynote speakers confirmed. And save the date: June 27-30 in Denver, Colo., USA.

Most popular news stories from HydroWorld.com for January 2017

Every month, the Hydro Group editors post dozens of news stories about hydropower and dams around the world on HydroWorld.com. What are the most popular ones for users of the site? Below are the top five news items for January, based on the number of clicks:

The friendly rivalry between Itaipu and Three Gorges continues 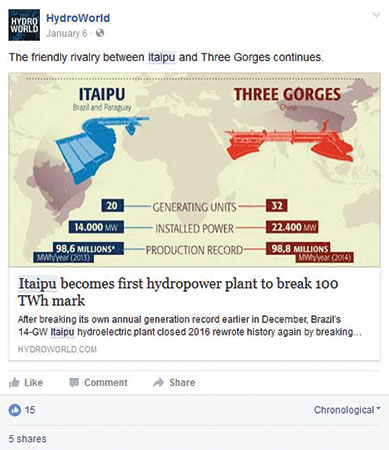 This Jan. 6 post reached 1,400 people and got 60 clicks to the website. It also got 15 Likes and was shared 10 times, with two people commenting.

This Jan. 27 story got 26 clicks to the website. It also got three retweets and two likes.

Most popular video on HydroWorld.com for January 2017

This video was viewed 648 times in January.

Costa Rica has the world’s highest percentage of total national electrical power generation by hydro. In 1970, I graduated from the University of Costa Rica with honors in civil and hydraulic engineering. Costa Rica also has a wind resource in the cordillera, especially in the southern half of the country. With such a prominent focus on hydropower within the national engineering establishment, I anticipate it will not be long after the first wind farm or two is installed that the Ticos will be looking at pumped storage amendments to their existing run-of-river hydro system.

The point is, there is not a lot of cross-fertilization between the wind and hydro generation industries, especially in the USA, which may ultimately be playing catch-up with other areas of the world. Of recent interest is the proposed Gordon Butte project in Montana. While not directly connected with wind, it is a very low-hanging fruit version of the typical pumped-storage project I envision being situated at an existing wind farm, albeit with delta H on average at one-fifth that of Gordon Butte. What Gordon Butte lacks that the wind farms provide is existing electric power grid infrastructure.

Several years ago, I did a quick look at a rather arbitrarily selected wind farm (Barton Chapel in Texas). I did a Mathcad workup on some of the hydro aspects. I did not do a formal estimate of construction expense, but for the site’s topography, soil features (provided by a county excavation contractor) and apparent water resource, the cost to install a hydro plant with the nameplate capacity of the wind farm (120 MW) was about 60% of the cost of the wind farm. I believe a formal study of arbitraging the life-cycle value of wind generation would likely indicate an optimum pumped storage facility somewhat less than the nameplate capacity of the wind farm.

I feel the first wind farm integrated with pumped storage is not too distant in our future, once the rest of the world begins to show us the way.