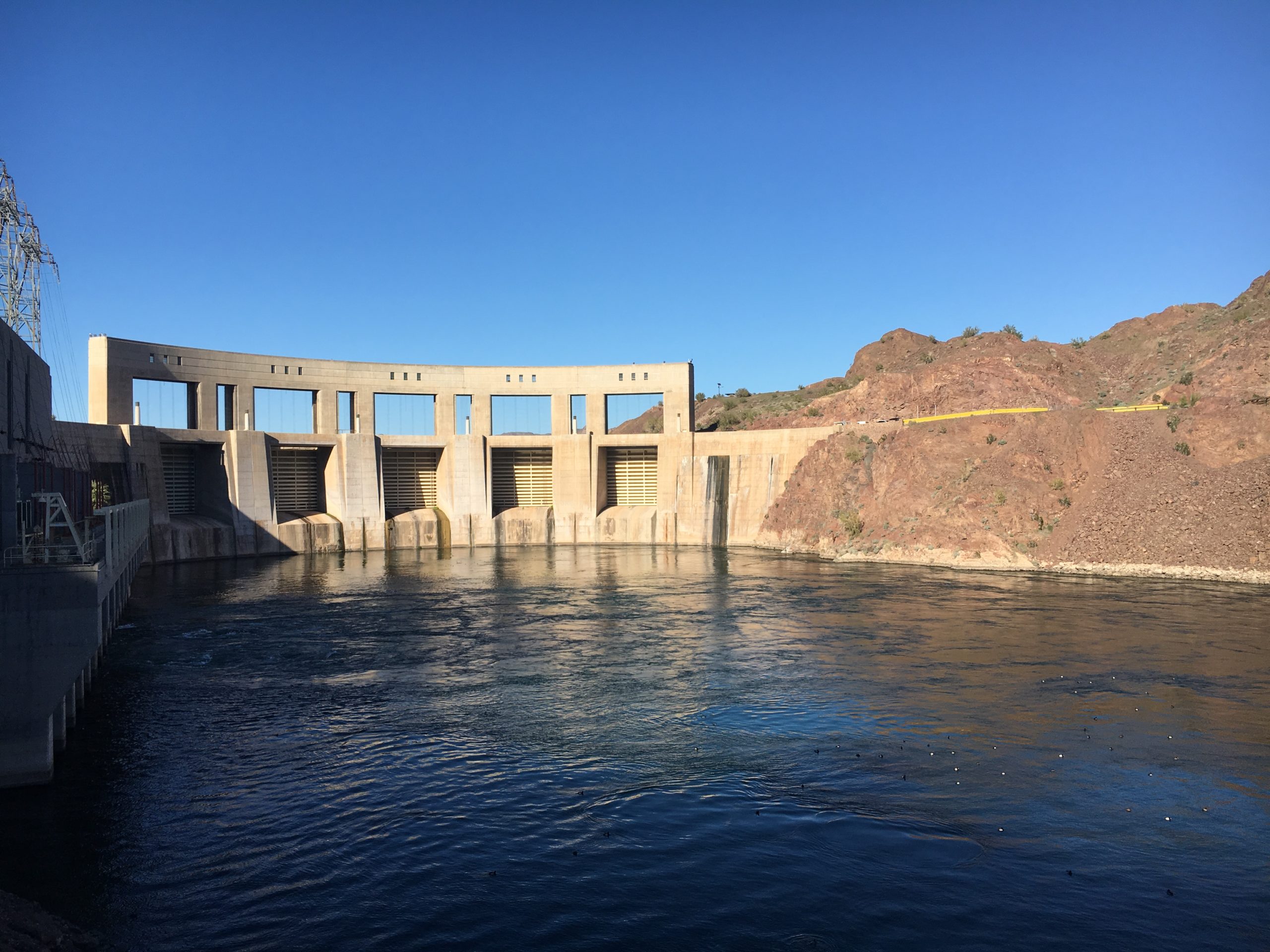 The Lower Colorado Dam Office of the U.S. Department of Interior’s Bureau of Reclamation is responsible for maintaining the Hoover, Davis and Parker dams and their associated hydroelectric plants. Hoover has a generating capacity of 2,080 MW, Davis has a capacity of 250 MW and Parker has a capacity of 200 MW. These hydroelectric facilities are essential to the coordinated operations of the Lower Colorado Dam Office, aiding in the reliable delivery of urban and agricultural water to the region.

Personnel from this office discovered quagga mussels, a thumbnail-sized invasive species from Eastern Europe, in Lake Mead (impounded by Hoover Dam) in 2007. The discovery posed a significant concern because these mussels can attach to and potentially colonize water supply systems at hydroelectric power plants, disrupting operations by clogging submerged surfaces such as water intakes, trashracks, cooling water piping and fire control systems.

That year, Reclamation began a feasibility study to: assess the Lower Colorado River dams at risk from mussel fouling, outline an environmentally sustainable approach to cope with the invasion, and identify control options for raw water systems to prevent invasion and infestation. After evaluating various chemical and non-chemical control methodologies, in 2013 Reclamation selected the Hydro-Opticâ„¢ (HOD) ultraviolet (UV) system supplied by Atlantium Technologies Inc. as the preferred treatment option to supplement operational and mechanical activities already in place at the Hoover, Davis and Parker dams. These activities included weed rakes to clean weed mats that would plug up the trashracks and manual cleaning of the heat exchanger systems to remove biofouling that would limit the flow of water into the hydroelectric facilities.

Unlike chemical treatment approaches, UV systems employ a physical process for disinfection. When bacteria, viruses and protozoa are exposed to the germicidal wavelengths of UV light, they are rendered incapable of reproducing. UV exposure is believed to affect the essential functions of the veliger (the larval stage), which inactivates the organism and prevents settlement.1 Although the exact effects of UV exposure on veligers are unknown, previous studies have indicated that UV exposure causes immediate or latent mortality.2,3

The HOD UV technology was installed at Davis Dam in 2013, Parker Dam in 2015 and Hoover Dam in 2018 to effectively and economically minimize the risk of quagga mussel fouling by preventing invasion and infestation.

Parker Dam is a hydroelectric facility with a nameplate capacity of 200 MW. It is also the most heavily mussel-colonized Reclamation dam on the Lower Colorado River. Heavy colonization began in late 2007, and in early 2008, the population of quagga mussels was large enough to plug the dam’s domestic water line and foul the water surrounding the generator seals. The gates on the dam’s spillway were also heavily colonized. As a result, Reclamation undertook an aggressive mussel management program.

The facility has four main turbines, each with eight heat exchangers, which require protection from mussels. The raw water supply of the onsite water treatment facility also required biofouling protection.

In December 2015, two HOD UV systems were installed at Parker Dam. Each UV system (Model RZB300-12 with DPM or deposit protection mechanism) accommodates a flow rate of 454 cubic meters per hour (1,600 gpm) for water quality conditions with UV transmittance (UVT) as low as 85%. UVT is an indicator of water quality and designates the percentage of UV light that passes through the water. The remaining three HOD UV systems were installed and commissioned in the spring of 2016. 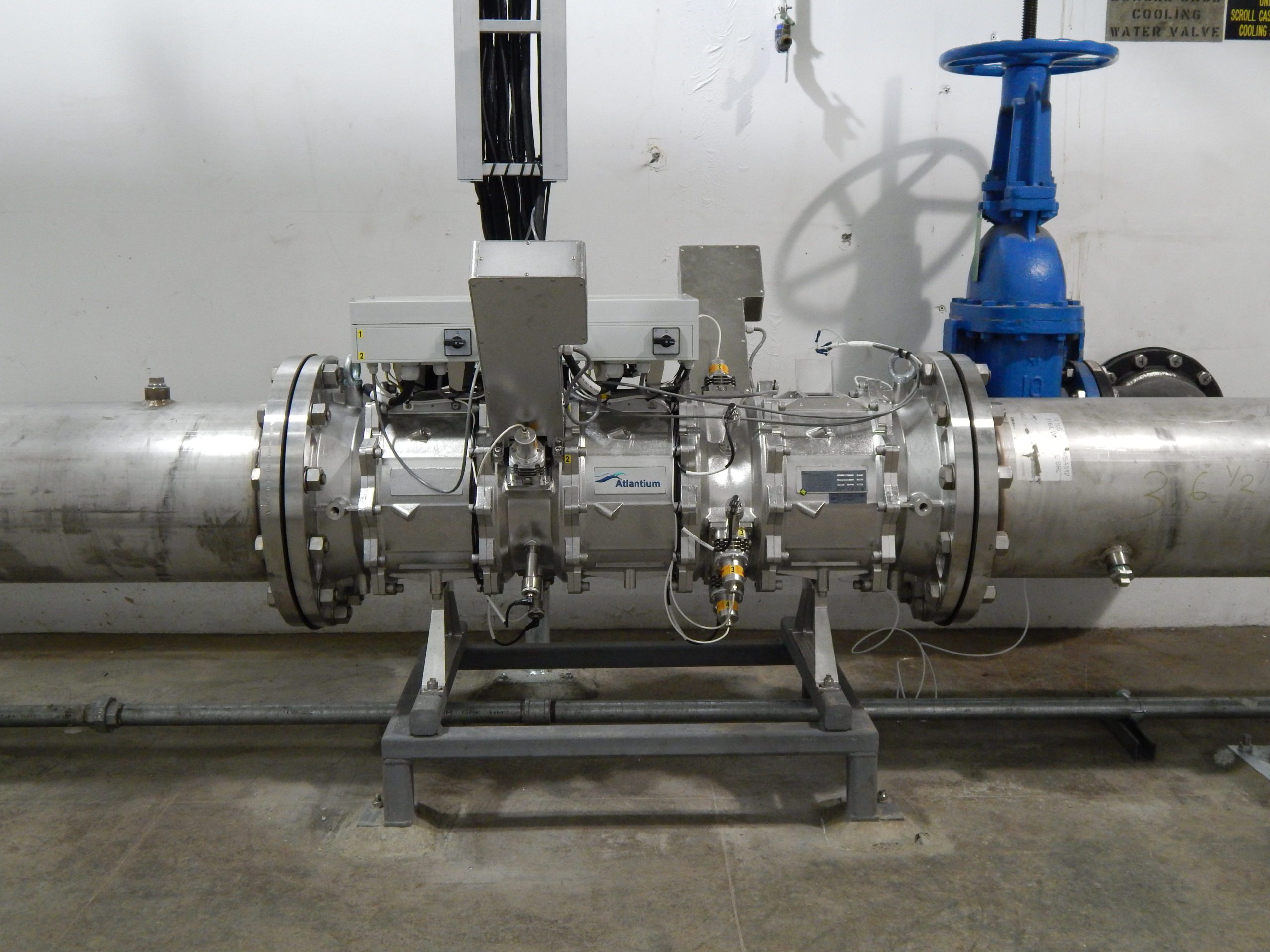 The medium-pressure HOD UV systems were supplied with a deposit control mechanism, percent UVT monitor, UV dose monitor and flow switch. To confirm water was flowing, limit switches on cooling water valves were used instead of installing a flow meter on each system. As a result, some of the features of the HOD UV system to pace flow and control dose were not used.

The HOD UV system uses a total internal reflection-based design that — when coupled with the comprehensive monitoring of such critical parameters as flow rate, UV lamp intensity and ultraviolet transmission percentage — allows the system to achieve and maintain the specified UV dose. A UV dose of less than 100 millijoule per square centimeter (mJ/cm2) was used at Parker Dam to achieve 99% inhibition of quagga mussel veligers settling downstream of the HOD UV systems.

The existing raw water piping and strainer required replacement before the UV systems were installed, due to excessive corrosion. Welded stainless steel piping and self-cleaning strainers were also part of the cooling water improvements.

Due to space constraints, the HOD UV units could not be installed immediately after the strainer of the raw water for the cooling water supply. To address the issue, the 14-inch piping was extended and looped back, providing the additional footprint needed to accommodate each UV system. The UV systems were placed horizontally with adequate spacing for maintenance (30 inches on each side for ease of UV bulb removal and located 3 to 4 feet above the floor).

A bypass also was installed so each unit could be taken out of service for annual maintenance while ensuring adequate flow to the cooling water for the generators. Control valve limit switches for open/close were used to detect when to signal the UV bulbs to shut down when no flow exists. All electrical components are located in a weather-proof room that does not exceed 100 degrees Fahrenheit. The system’s communication is accomplished by MODBUS, and signals are taken to a central location for monitoring the system alarms and operating parameters.

Reclamation personnel entered into a turnkey annual maintenance agreement with Atlantium to perform all routine, semi-annual and annual maintenance for the HOD UV systems at Parker Dam. Atlantium’s level of familiarity with the technology allowed them to provide routine service far quicker than what Parker Dam staff could have performed. This resulted in better utilization of Parker Dam staff by directing their efforts to projects where they were the most effective in terms of time and associated costs.

Since installation, the HOD UV technology has required minimal oversight by Parker Dam staff. Staff members perform a daily check to confirm system operation. In terms of system maintenance, the only change has been to the clean-in-place (CIP) schedule. Due to the hardness of incoming water, a higher frequency CIP schedule was required.

Allowing for significant reallocation of resources

The five HOD UV systems at Parker Dam cost $462,500 to install. With proper maintenance and operation, they are expected to last for a minimum of 20 years.

After the full-scale installation of the HOD UV technology at Parker Dam, the facility quickly saw the operational benefits of this technology. Through control of mussel invasion and infestation, the HOD UV technology helped facility personnel reduce the annual heat exchanger inspection frequency by 75% in year one, from 16 to four, and then down to zero in year two. This reduction allowed Reclamation to reallocate resources at Parker Dam that otherwise would have been used to inspect, clean and reinstall the heat exchangers. It also produced savings with associated material costs used during the inspections. This saved a total of 640 man-hours annually compared with before the HOD UV technology was installed. At $100 per hour, this avoided $64,000 of annual costs. Additionally, at $500 to $1,000 per heat exchanger, materials costs of $8,000 to $16,000 are avoided.

Scaling on the heat exchangers was noticeably reduced with the use of the technology. 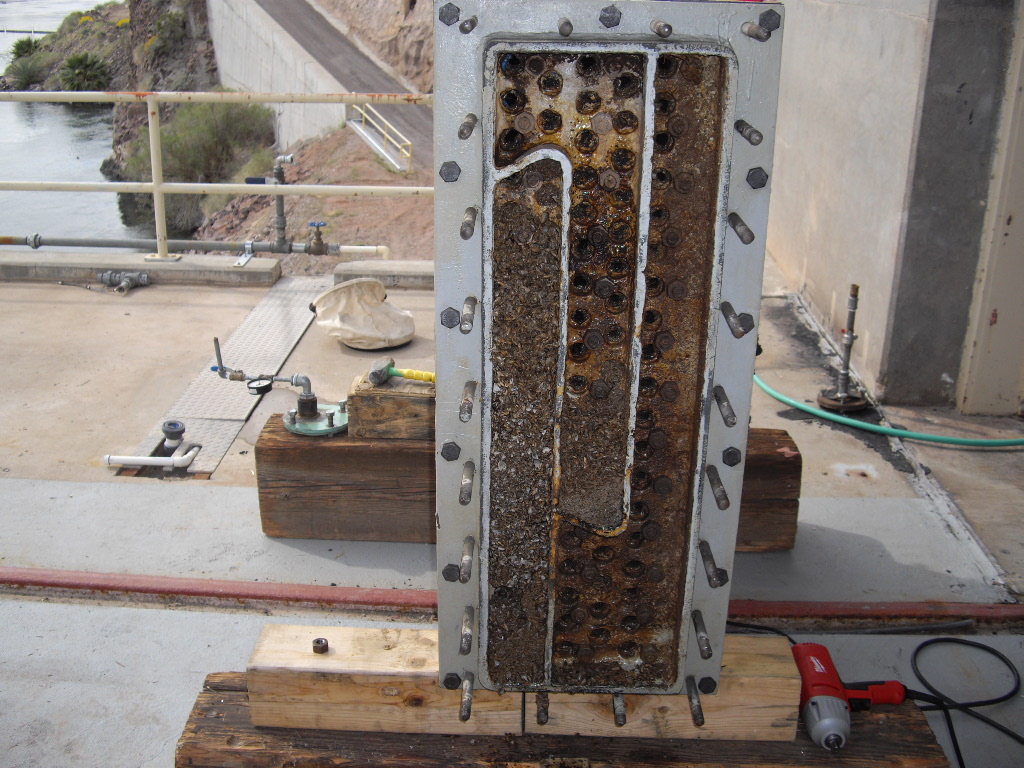 Before photo of Parker Dam heat exchangers, with significant scaling 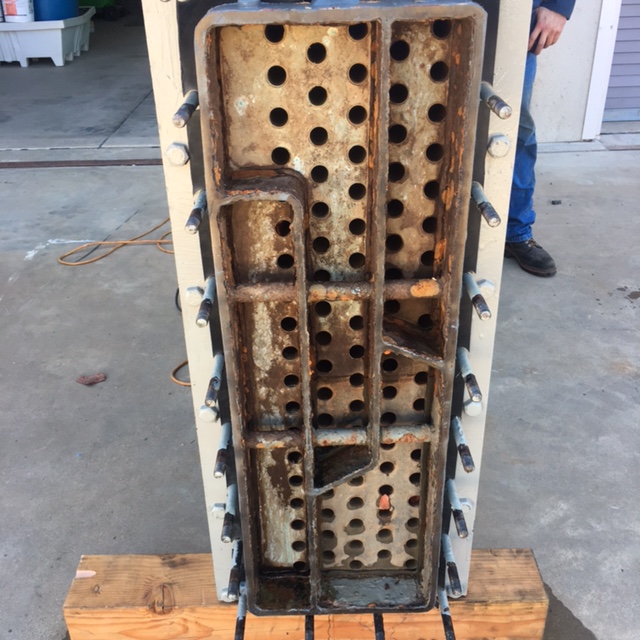 After photo of heat exchangers, with scaling noticeably reduced.

Overall, the HOD UV technology has performed well since implementation, achieving a 99% inhibition of quagga mussel veligers settling downstream of the system and addressing biofouling concerns at Parker Dam and other Reclamation facilities.

Leonard Willett, formerly environmental compliance manager at Hoover Dam for the U.S. Department of Interior’s Bureau of Reclamation, is now an associate with RNT Consulting Inc.