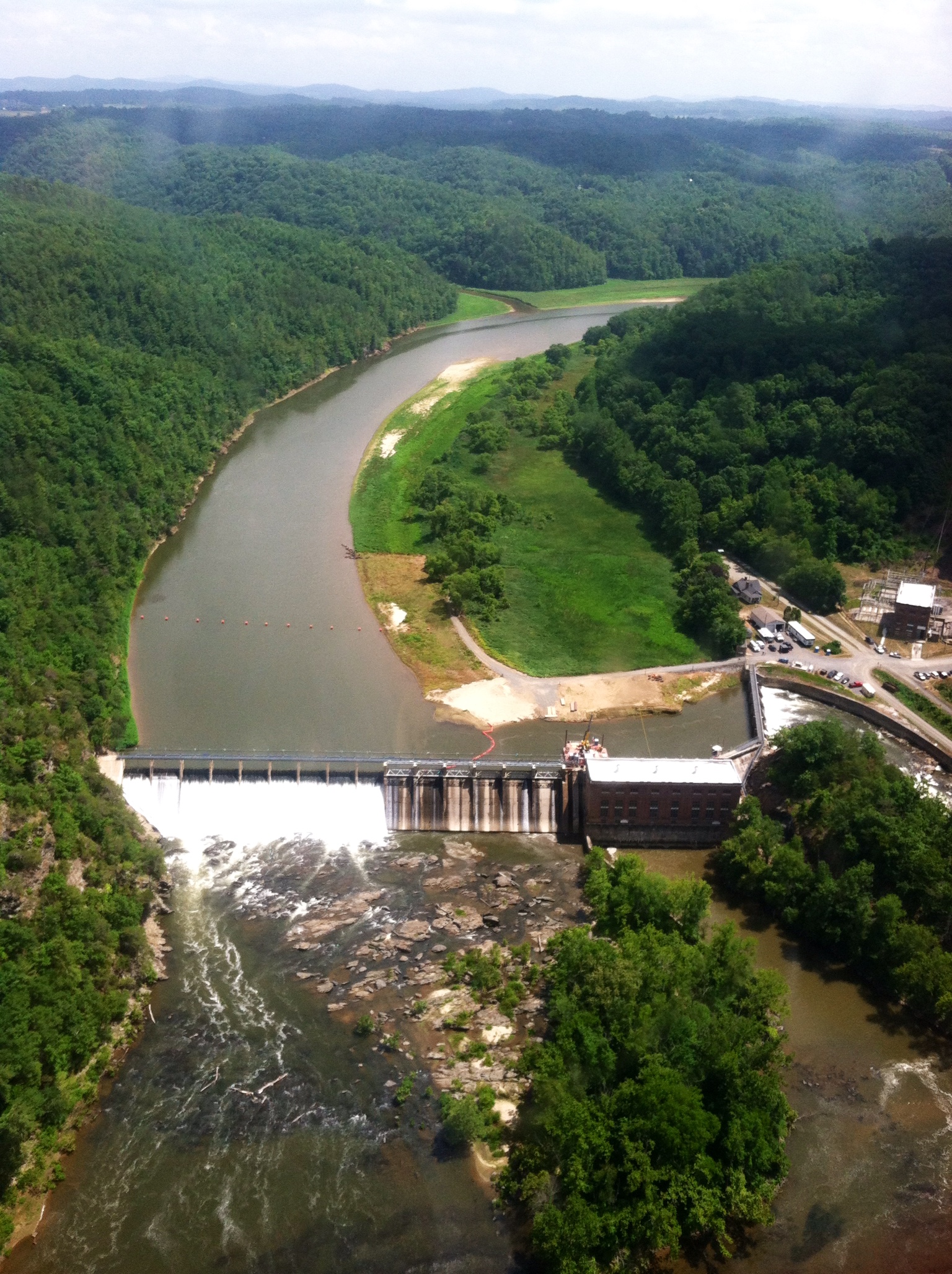 More than 100 years after first generating electricity, American Electric Power’s (AEP) 21.6-MW Byllesby hydroelectric plant continues to provide reliable electricity to its customers. The Byllesby plant is located on the New River in southwest Virginia, in Carroll County, near the town of Byllesby, about 60 miles south-southwest of Roanoke.

The Byllesby facility was inducted into the Hydro Hall of Fame for 2018, at HydroVision International 2018. This article provides the background of this historic project, as well as some advancements made to bring this reliable source of electricity into the 21st century.

History of the project

Sixty miles into that state, after flowing through Raleigh County, the New River joins with the Gauley River to form the Kanawha River. That river then flows through Kanawha, Putnam and Mason counties, entering the Ohio River at Point Pleasant, W.Va. As it traverses Virginia and West Virginia — a distance of 311 miles — the river drops a total of 1,936 feet, or over 6 feet a mile, an unusual attraction for hydroelectric development.

The New York City engineering firm of Viele, Blackwell and Buck identified the potential Byllesby dam site, as well as five other sites for potential hydropower development on the New River.

The construction of Byllesby was begun in 1911 and completed in 1912. According to the book And There Was Light, the Story of American Electric Power, its First 85 years 1906-1991, the money needed to finance the project was raised by well-known utility entrepreneur Henry Marison (H.M.) Byllesby through his investment firm, H.M. Byllesby & Company. The firm saw to it that the dam came online to serve the power needs of the coalfields around Bluefield, W.Va.

An associate of Thomas Edison, Byllesby “made all of the drawings and many of the designs of the first central station of the Edison Electric Light Company in New York City,” according to the book Chicago: Its History and Its Builders. He went on to help found a company to rival Edison’s, the Westinghouse Electric Company, in 1885, as the first vice president and general manager.

“He is largely responsible for the development of the alternating current system of electric lighting and has taken out over 40 patents on various distribution systems and electrical apparatus,” the book said.

By 1901, Byllesby formed a company under his own name in Chicago that provided consulting design and construction engineers, and he presided over a long list of power companies from Delaware to Portland, Ore.

In 1912, officials with the company named the first two New River sites to generate electricity Byllesby and Buck. According to local newspaper the Galax Gazette, in an article entitled “Buck & Byllesby: 100 Years of Hydroelectric Power,” the resume of inventor and patent holder Byllesby could hardly be improved upon in the field of electricity generation.

According to And There Was Light, like the transmission lines that followed, the Byllesby dam was constructed with Italian immigrant labor. The immigrants landed in Boston Harbor and were brought to the construction site by train. They were paid $1.94 a day. It was a job for muscle, human and animal, as oxen were common in many of the construction photos. 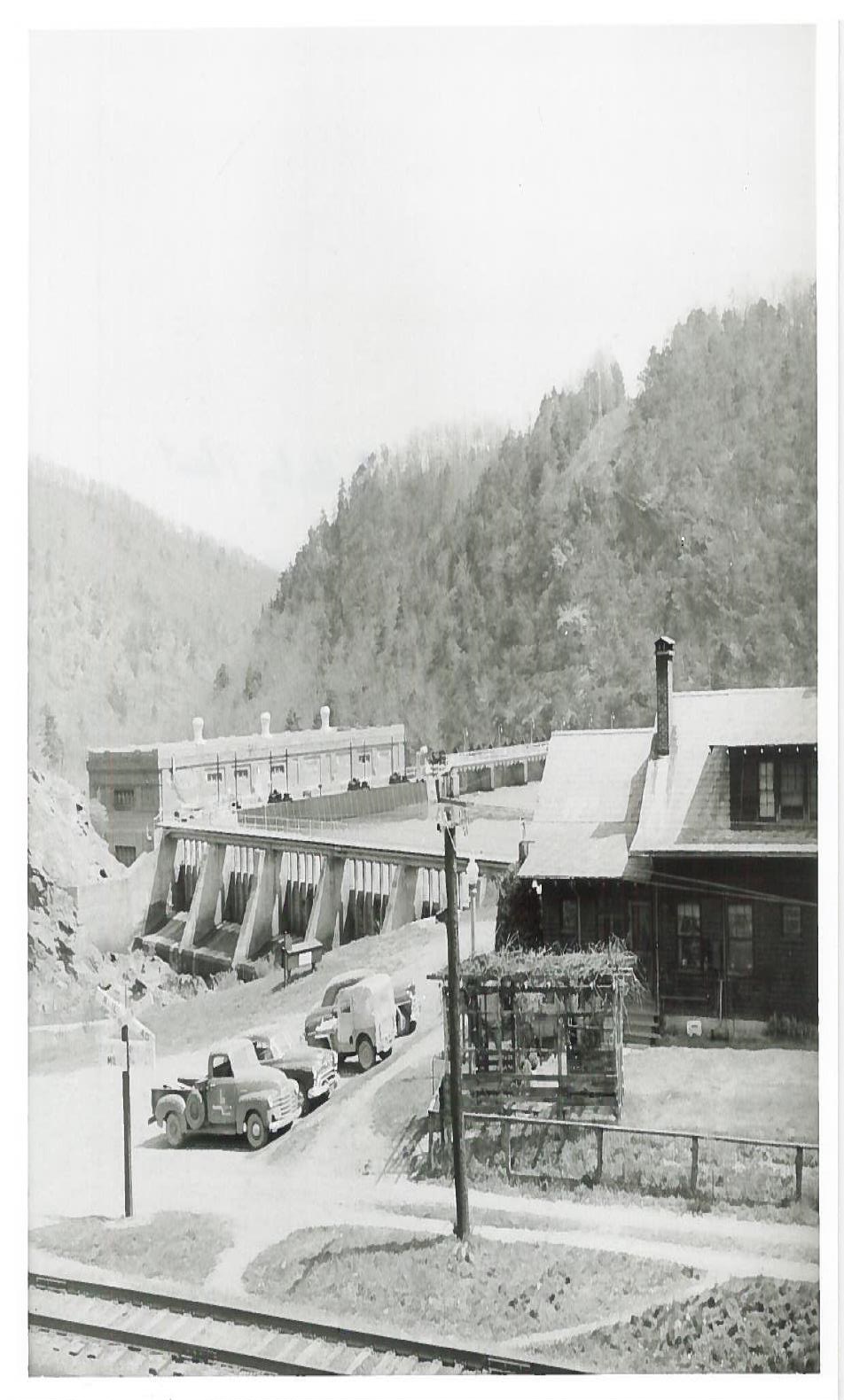 Construction of the Byllesby plant, which “employed” oxen as well as people.

As was common during this period of time, construction “towns” were built to ease the hardships of the workers. The building site was very remote and remains so to this day. The construction “town” provided housing, a store and a canteen for meals.

The existence of the dam not only made it possible for the coal companies to expand their operations and their employment, but also encouraged new industries to come into the area and allowed dozens of small communities in the area to enjoy the convenience of electricity for the first time.

Details of the development

The development consists of a main spillway dam adjacent to a powerhouse and non-overflow bulkhead, and an emergency spillway dam. The water-retaining structures have a total length of 948 feet. The lake has a surface area of 66 acres and impounds 2000 acre-feet at normal pond elevation of 2079.2 feet.

The main spillway dam has a total length of 528 feet, of which 470 linear feet is gated. The spillway has six original tainter gates; five Obermeyer pneumatic gates added in 1997 (one), 2016 (two), and 2018 (two); four stanchion flashboard bays; and a sluice gate. The Obermeyer gates were added to decrease the need of knocking flashboards. Before their installation, whenever the hydraulic capacity of the project was exceeded by a high water event, flashboards were knocked to compensate. This resulted in the forebay remaining 9 feet lower in elevation until the flashboard sections could be reinstalled.

The powerhouse is located on the west end of the main spillway dam and has a length of 151 feet, with a reinforced concrete substructure supporting a steel frame and brick superstructure. The powerhouse contains the original four vertical I.P. Morris Francis turbines with General Electric generators, with a total plant capacity of 21.6 MW. 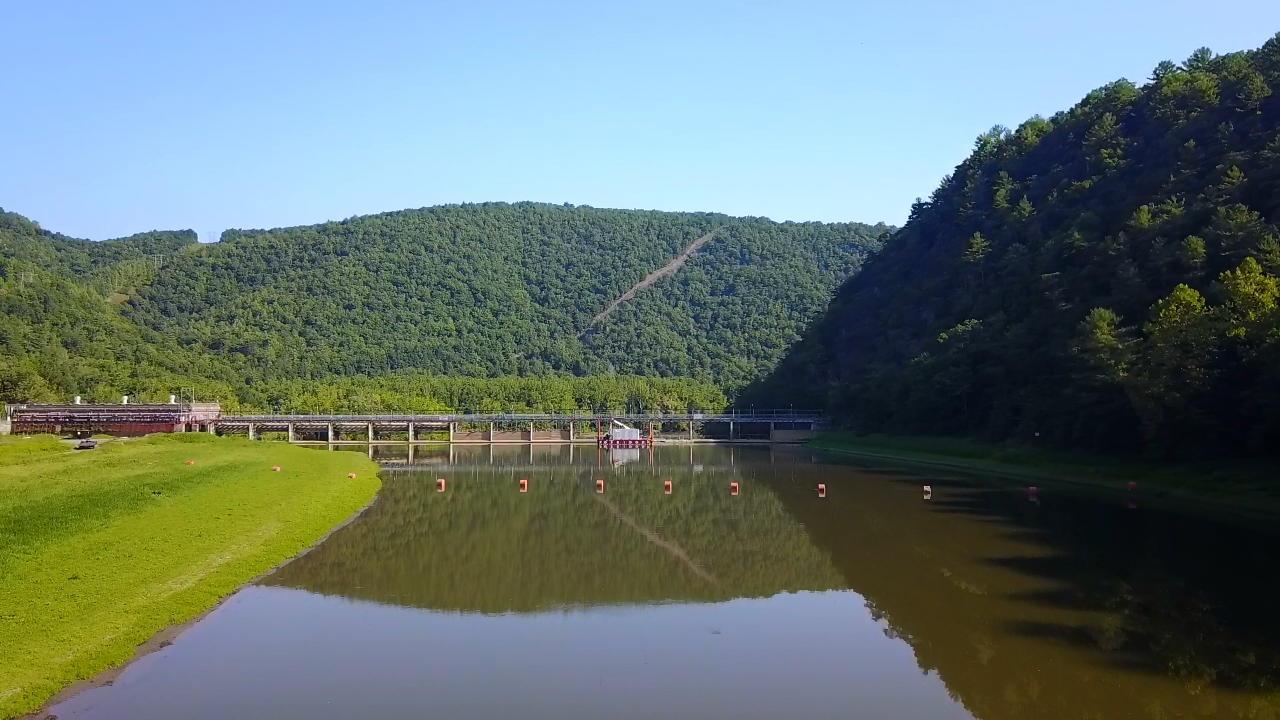 The Byllesby hydro plant and dam is on the New River in southwest Virginia.

On the west side of the powerhouse is a 77-foot-long non-overflow bulkhead. The bulkhead angles between and connects to the powerhouse and the emergency spillway dam.

The emergency spillway dam is 198 feet long between concrete abutments, of which 188 feet is gated by six bays of 9-foot-high and 31-foot-wide flashboards supported by steel stanchions. The stanchions must be manually released to discharge water.

Other than generator rewinds and controls upgrades, very few changes have occurred with the original generating equipment. Each unit continues to operate reliably and the plant generates a total of 55 GWh per year for AEP’s customers.

As explained by John Jung, president and chief executive officer of Greensmith Energy, the battery system and hydroelectric dam will operate simultaneously. The battery system is faster responding than the hydroelectric dam, so it enables the hybrid facility to bid into the PJM Reg D frequency regulation market, which requires fast and accurate response on a second-by-second basis. Without battery storage, Byllesby would not otherwise be able to participate in the Reg D market. This brings incremental revenue to the project. 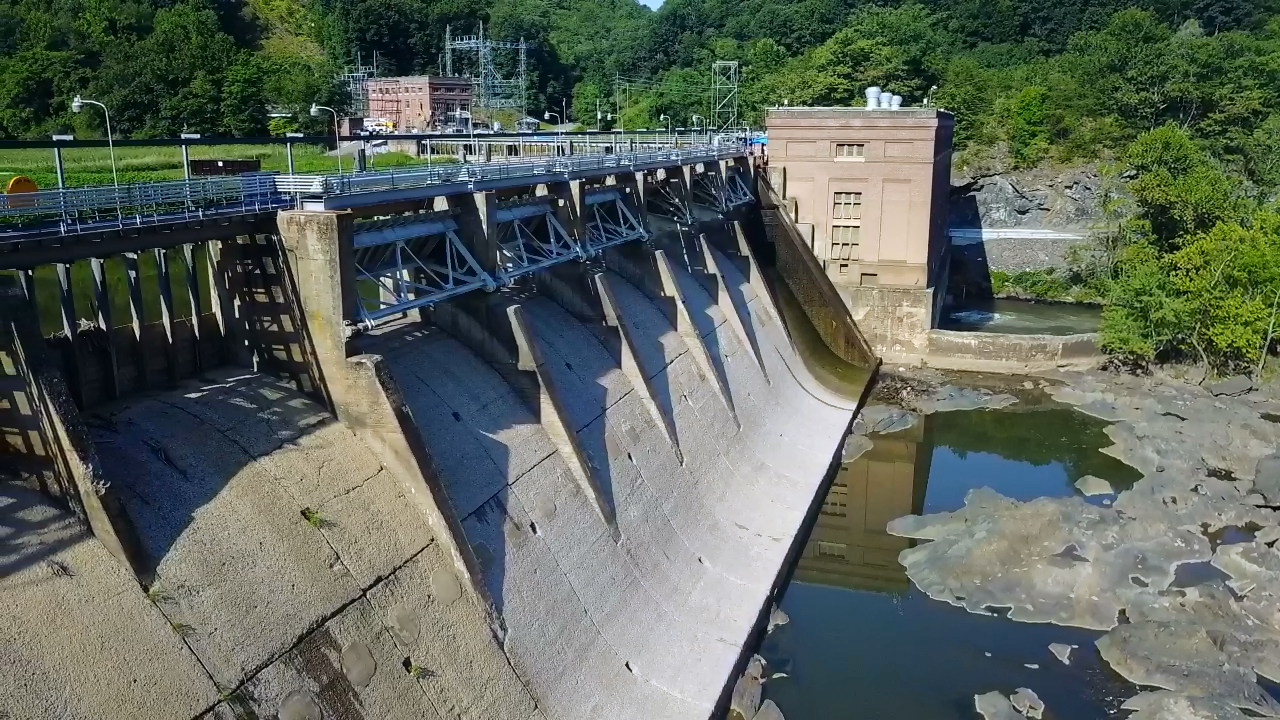 The dam at Byllesby has stood for more than 100 years, providing water for the adjacent powerhouse.

The Hydro Hall of Fame awards are presented each year at HydroVision International. Three North American facilities were inducted in 2019, and articles will be published on these facilities in the coming months.