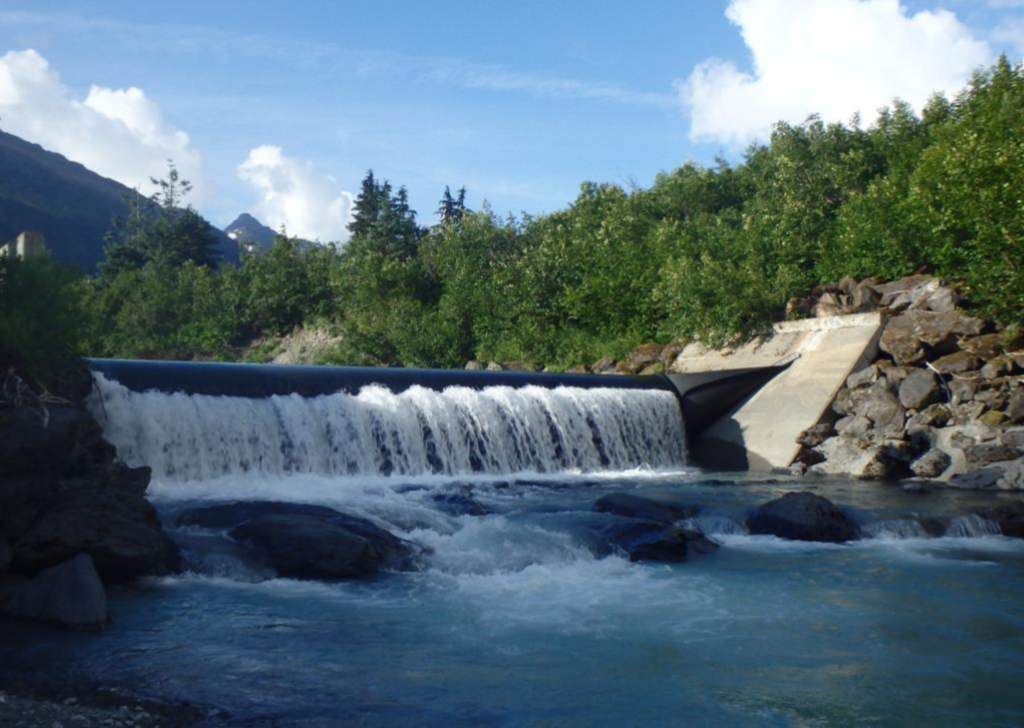 The authors identify significant untapped hydropower opportunities within the state of Alaska, including enough new power potential for a tenfold increase in hydropower across the state and potential solutions for completely offsetting diesel generation in several Alaska Native villages.

The state of Alaska contains vast natural resources, including significant inland lakes and rivers. The state’s population is concentrated in cities in the south-central and southeastern regions, where relatively cheap energy is available, primarily from hydropower and natural gas. Other areas of the state tend to rely on high-cost dieselfuel. According to the U.S. Energy Information Administration, in 2017, natural gas accounted for 43% of Alaska’s utility-scale net electricity generation, while hydropower accounted for 25%. Significantly more hydropower could be added through new development along untapped streams and rivers.

In recent years, the U.S. Department of Energy (DOE) tasked Oak Ridge National Laboratory (ORNL) to assess hydropower opportunities in Alaska. The results of these studies are summarized to demonstrate new hydropower potential across the state, as well as opportunities for Alaska Native villages to offset their diesel consumption using renewable hydropower generation.

According to ORNL’s National Hydropower Plant Dataset,1 Alaska’s operational hydropower fleet consists of 50 non-federal plants with a total installed capacity of 482.5 MW. Nine additional plants, totaling 49.8 MW, are proposed for development. As with the majority of Alaska’s population, its existing and proposed hydropower facilities are primarily concentrated at the southern and southeastern coasts (see Figure 1). 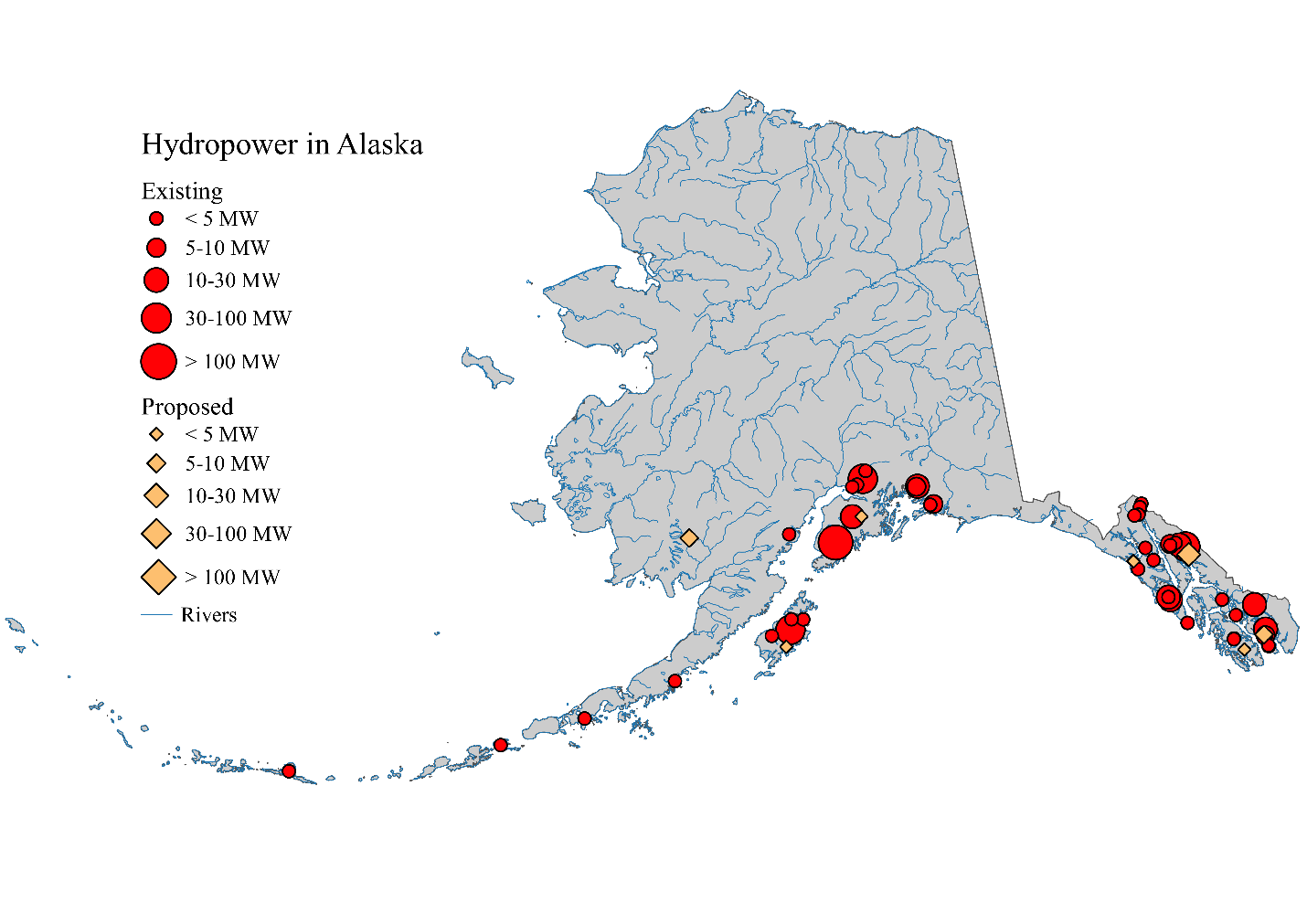 Figure 1. Map of existing and proposed hydropower in Alaska

In 2012, the DOE Water Power Technologies Office funded ORNL to perform a national assessment for identifying hydropower opportunities along undeveloped stream reaches where no infrastructure (such as dams) exists.2 As part of this assessment, ORNL coordinated with the Alaska Energy Authority (AEA) and U.S. Army Corps of Engineers (USACE) to evaluate new site development (NSD) opportunities in Alaska.

During the Alaska assessment, ORNL collected and evaluated data for 2,200 projects from 400 reports. Subsequent high-level screening was performed to identify the technically feasible NSD resource. The screening process was based on several criteria set and agreed upon by AEA, ORNL and USACE. Although digital data were available from the AEA database, significant data processing was required to ensure the accuracy of the information.

Of the 2,200 sites assessed in Alaska, 437 passed the high-level screening and were classified as “technically feasible.” The 437 sites resulting from this process constitute what is referred to as the “feasible” NSD potential in Alaska.3 Similar to the NSD methodology applied in Hawaii and the contiguous U.S., these Alaskan projects have not undergone detailed feasibility analyses — i.e., economic, environmental, cultural or land use restrictions have not been assessed. Reflecting the significant raw natural resources within the state, these 437 sites could provide 4,723 MW of new hydropower in Alaska, roughly 10 times as much as the current hydro capacity in the state (482.5 MW).

Figure 2 provides a map of existing and feasible hydropower sites in Alaska. As with the existing hydropower, most of the feasible NSD potential is located in south-central or southeast Alaska, near population centers, or in mountainous terrain. Of the 437 NSD sites identified, 76% have a capacity of less than 5 MW, which could be suitable for smaller communities. Figure 2 also shows the location of Alaska Native villages, many of which could be well-suited for hydropower development due to their proximity to water resources and current reliance on diesel energy. 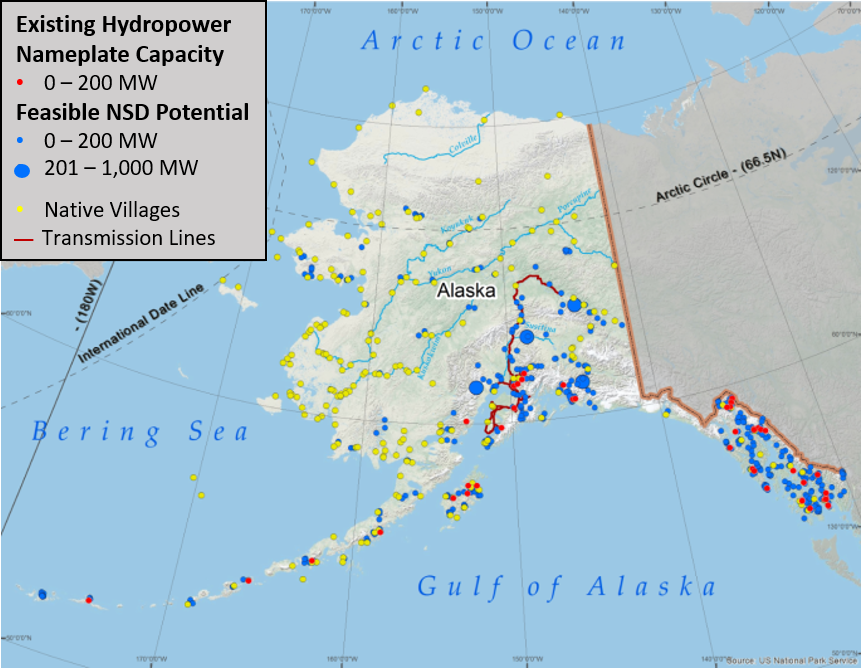 The vast majority of Alaska is rural, containing mostly isolated communities with limited infrastructure. The communities’ centralized power systems are often isolated grids that are not interconnected due to the economic challenges associated with connecting across long distances and rough terrain. As a result, most of these communities rely on expensive power ($0.30 to $1.00/kWh) supplied by diesel generators and maintain low power consumption to reduce hardship. Diesel fuel must be obtained through barge or air transport, which comes with high costs, uncertainty and risk.

Because the price per kilowatt-hour in rural Alaska can be three to five times higher than urban areas in the state, AEA developed the Power Cost Equalization (PCE) program to help offset the high cost of obtaining fuel and generating power. Currently, 171 Alaska Native villages participate in the program and are required to file monthly reports with AEA to receive payment. These reports are available online4 and include statistics on diesel consumption and cost, as well as energy production and purchases.

In addition, the DOE Office of Indian Energy provides funding for activities intended to assist Alaska Native villages with energy development, capacity building, energy cost reduction and electrification. Many of the Alaska Native villages are rural communities, which face the same challenges associated with high-cost diesel power. Given the results of the 2014 NSD study, many of these isolated communities are in proximity to water resources that could be tapped for hydropower development. Such development could provide a cost-effective alternative to diesel-fueled generation by offsetting village diesel usage completely or significantly over multiple decades of the hydropower project’s lifetime.

In the interest of improving energy security for the Alaska Native villages, the DOE Office of Indian Energy funded ORNL, in 2017 and 2018, to evaluate hydropower development opportunities across 171 Alaska Native villages. The resulting research effort5 leverages results from the 2014 NSD study, village energy data from the PCE program, geospatial information provided by the Bureau of Indian Affairs (BIA), and knowledge from AEA. Based on that information, ORNL has developed a model that evaluates village diesel consumption, cost, and price per gallon, as well as energy production and purchases. The resulting analysis is used to identify the potential diesel offset from hydropower development on an annual and 50-year (assumed hydro project life span) basis.

With geospatial data collected for the 171 Alaska Native villages and 437 feasible sites, ArcMap 10.2 software was used to compute distances between villages and the nearest NSD site. Distances were verified using additional geographic and geovisual analysis. Annual hydropower generation was estimated assuming a 50% capacity factor (ratio of average power generated to rated peak power). The potential annual hydropower generation was compared to the village’s annual energy consumed from diesel generation to assess how much diesel could be offset by hydropower. Importantly, this analysis did not consider seasonal variability. In many cases, the technical potential generation from hydropower exceeded the village’s energy demand, in which case the analyzed hydropower capacity was reduced to meet, but not exceed, the village energy demand.

The assumed 50-year hydropower project life span provided a corresponding 50-year period of diesel fuel offset. To more accurately simulate the fuel prices over that time span, an AEA fuel price projection model was used. The model accounts for factors and costs of transporting diesel fuel from the refinery to a specific community and projects fuel prices through 2040. Beyond 2040, future diesel prices were assumed to increase at a 3% inflation rate. With village fuel prices projected through the 50-year project life span, the net present value (NPV) of diesel offset was calculated using a discount rate of 3%. This 50-year NPV provides a useful measure of project economic impact in terms of diesel cost savings.

With all 171 PCE villages matched to the closest NSD site, seven screening criteria were applied to further assess feasibility. The criteria considered:

2) village size (villages with fewer than 25 residents were excluded),

3) village proximity (each NSD site was matched only to the closest village),

6) transmission distance (any village over 5 miles away from the NSD site was excluded), and

7) diesel offset (hydropower opportunities that offset less than 50% of a village’s diesel consumption were excluded).

The villages that passed all seven filters were considered the best candidates for further analysis. Many sites met some, but not all, the filters. While these filters leveraged expert opinion from AEA staff and are based on sound engineering judgment, it is difficult to know what site-specific features may prove advantageous or detrimental to hydropower development or how certain technological or economic conditions may change in the future. Additional, more detailed analysis may yield further insights into the development opportunities.

Of the 171 villages included in this analysis, 11 passed the screening process and warrant continued analysis into potential hydropower development. These 11 hydro sites have a combined potential capacity of 2.95 MW and an annual generation of 12,934 MWh, of which only 1.25 MW and 5,488 MWh is needed to best meet the energy demands of those 11 villages. This hydropower potential could reduce the collective diesel usage by 435,000 gallons a year, or about 22 million gallons over 50 years.

Figure 3 identifies the 11 villages and sites identified for future hydropower development. Additional technical and economic analyses could be conducted to further assess the feasibility of these 11 opportunities and reassess other sites that did not pass initial screening. More information on the study is available.5 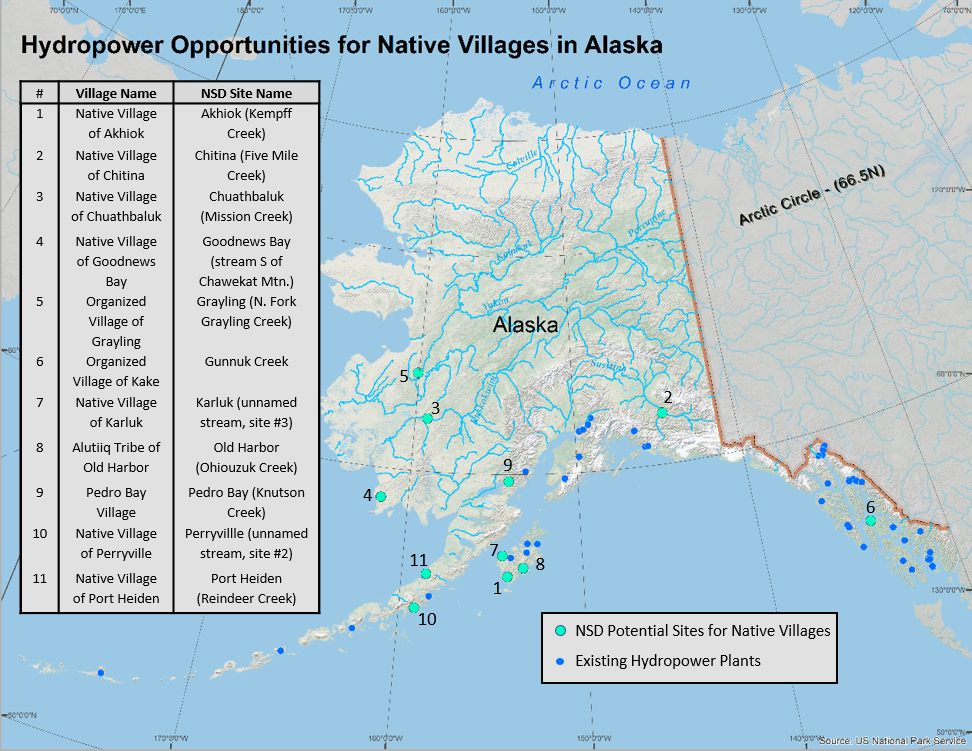 Note: The Gunnuk Creek Hydropower Project is in the construction phase

In collaboration with state and federal officials, the authors identify significant untapped hydropower opportunities within Alaska, including enough new power potential for a tenfold increase in hydropower across the state and potential solutions for completely offsetting diesel generation in several Alaska Native villages. Further technical and economic analyses are recommended for the potential hydropower sites identified.

Boualem Hadjerioua is lead water power technology, Scott DeNeale is technical staff member, and Miles Mobley is a post-bachelor with Oak Ridge National Laboratory’s Environmental Sciences Division. Michael Kuca is an engineer and Lizana Pierce is a deployment supervisor with the U.S. Department of Energy’s Office of Indian Energy.

The research described in this report was supported by funding from the U.S. Department of Energy, Office of Indian Energy (which sponsored assessment of Alaska Native villages) and DOE Water Power Technologies Office (which sponsored the NSD study). The authors would like to acknowledge and express their appreciation to all the following individuals and programs for their support of this preliminary technical assessment.

This manuscript has been authored by UT-Battelle, LLC under Contract No. DE-AC05-00OR22725 with the US Department of Energy. The United States Government retains and the publisher, by accepting the article for publication, acknowledges that the United States Government retains a non-exclusive, paid-up, irrevocable, worldwide license to publish or reproduce the published form of this manuscript, or allow others to do so, for United States Government purposes. The Department of Energy will provide public access to these results of federally sponsored research in accordance with the DOE Public Access Plan (http://energy.gov/downloads/doe-public-access-plan).