The Hydro Site Evaluation project (HSE) encompasses a new approach by the Southeast Alaska Power Agency (SEAPA) to conduct conceptual and feasibility-level analyses of potential hydroelectric sites. Typically hydro feasibility is dominated by civil engineering disciplines, but because nearly all the potential sites are located on federal lands, SEAPA’s approach uses biologists and policy advisors in the initial, mid-stage and final assessments of data collection and evaluation. This ensures that key aspects of planning, such as anadromous fish habitat and land use designation, are immediately tabulated with traditional characteristics such as power and energy and a construction plan. 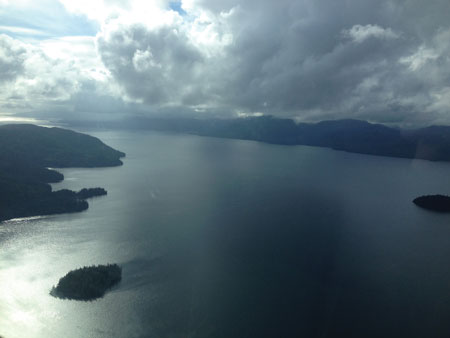 SEAPA is collecting data and consulting with agencies outside the Federal Energy Regulatory Commission (FERC) preliminary permit process, as that process is designed for study of specific sites by specific developers and demands short investigative timelines. Both of these preliminary permit characteristics are in conflict with the HSE goal to develop a multi-user e-library that can be accessed into the indefinite future. Additionally, the FERC preliminary process encourages agency consultation that is designed around specific sites and precludes a discussion of agency policy, and portions of these policies actually restrict investigation efforts, creating a planning “Catch-22” for hydro development.

To better understand HSE specifics, it is helpful to learn SEAPA’s organizational structure and the dynamics of the Inside Passage and glimpse some of the main points in the federal regulatory backdrop.

Prior to restructuring in 2009, SEAPA was the Four Dam Pool Power Agency which owned four hydro projects that operated independently and sold project output as wholesale energy to the municipal utilities of Ketchikan, Wrangell, and Petersburg and to the co-operatives Kodiak Electric and Copper Valley Electric. Of the four projects,Tyee Lake was largely under-utilized as this project’s generation capability was significantly larger than the loads of Petersburg and Wrangell. Restructuring allowed better local control of assets for Kodiak and Copper Valley. Kodiak purchased the Terror Lake Project, and the Solomon Gulch Project was deeded to Copper Valley; Swan Lake and Tyee Lake were retained by SEAPA.

The ownership exchange provided financing to construct a power line connecting Ketchikan to Tyee Lake via Swan Lake. The new power line allowed for better utilization of hydropower to displace Ketchikan diesel generation with the dispatch of SEAPA assets Swan Lake and Tyee Lake, governed by a new, long-term power sales agreement. Long-term planning is an option of the power sales agreement, thus the goal of retaining renewable energy through the continued development of hydropower became a commitment of the SEAPA board of directors and staff.

Power in the Inside Passage

The Inside Passage is a route for oceangoing vessels along a network of passages that weave through islands on the Pacific coast of North America. It extends from southeastern Alaska through western British Columbia in Canada to the northwestern part of Washington. The topography is heavily forested, steep glaciated terrain. Inter-island roadway systems do not exist for most Alaskan Inside Passage towns, and they are only accessible by air or marine ferry.

The SEAPA electrical system is located in the center third of the passage and connects Ketchikan to Wrangell and Petersburg via a single-path transmission system. In addition to its hydroelectric facilities, SEAPA owns and operates 175 miles of transmission lines that includes 14 miles of submarine cables. The SEAPA system could connect the outlying communities of Kake and Metlakatla in the future, thus the HSE library includes sites near these communities. Figure 1 on page 20 identifies SEAPA’s existing buffer zones, control area (transmission system) and hydroelectric facilities. 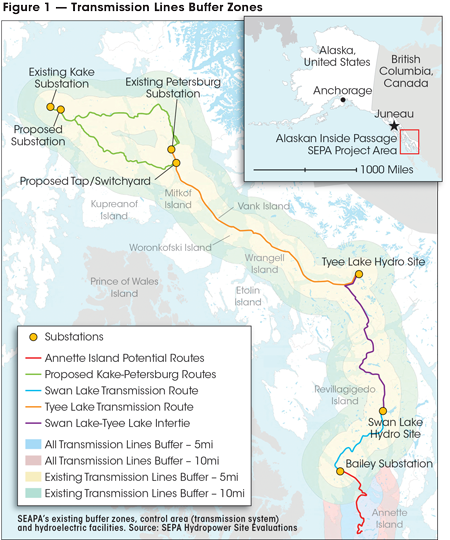 The control area has several characteristics. Most notable is the fact that it is not connected to other transmission systems. It is an islanded system – a system in which all power and transmission needs must be provided internally – with diesel-powered generation the sole alternative to hydropower in the control area. Because hydro sites are notoriously difficult to permit, which makes timing the hydro site with load growth difficult, especially in light of the islanded restriction where long positions are not sold but stranded, SEAPA initiated and executed a long-term strategy for hydro development to offset future dependence on diesel generation.

According to the Congressional Research Service’s 2012 report to Congress, the federal government owns about 62% of land in Alaska. Thus, the federal government dominates land use and ownership, including 16 million acres that make up Tongass National Forest (TNF). SEAPA maintains transmission lines in TNF and has identified sites that could be used to generate hydroelectric power. But, prior to any evaluations of risk, cost and benefits for a hydropower site within TNF, SEAPA must identify potential sources of uncertainty with regard to land use designations (LUD), roadless area rules and instream flow requirements.

Federal policy through the 2008 Land and Resource Management Plan (Forest Plan) sets forth direction for TNF land use. The policy designates that management units – designated blocks within the forest for specific purposes – provide expectations and limits on how and where activities will be conducted in prescriptive LUD and inventoried roadless areas, along with forest-wide standards and guidelines. The management prescriptions include 19 LUDs, each with its own goal and objective, and specific standards and guidelines designed to ensure their achievement.

Unfortunately, in past versions and the current Forest Plan that was updated in 2008, little attention was paid to renewable energy development potential or future need. Thus, many of the management prescriptions and applicable standards and guidelines make it difficult to conduct work necessary to evaluate sites for potential development, as well as to ultimately pursue development.

SEAPA is engaged with TNF personnel in amending the Forest Plan and helping define a mechanism for evaluating and potentially developing renewable energy sites in a plan-consistent manner.

The health of fishery resources in Southeast Alaska is also of paramount concern.

Even for fish that are not listed as threatened or endangered under the Endangered Species Act, activities in the region that could impact fisheries are closely scrutinized. The Alaska Department of Fish & Game (ADF&G) has an ongoing program to secure instream flow water rights to protect fish and aquatic resources, and these rights can lead to significant constraints on the development of hydropower.

Of paramount importance is an in-depth understanding of the quantity and timing of water that could be available for power production, including both the natural hydrograph and regulatory constraints that might influence how power could be dispatched to meet potential load demands.

SEAPA has long recognized that ADF&G and the Alaska Department of Natural Resources have significant roles in managing Alaska’s natural resources that could be affected by hydropower development. So in a similar manner to SEAPA-TNF planning discussions, SEAPA is establishing common ground with ADF&G through a joint study initiative. Both of these initiatives are the result of the forward-looking HSE project and outside the traditional FERC consultation process.

HSE uses a multi-disciplinary team that includes hydrologists, engineers, biologists and policy advisors to identify risks, costs and benefits of potential hydroelectric sites within the agency’s control area. HSE provides the evaluation team with empirical methodology to determine the evaluation level applied to each site and site alternative. Using a scale from 0 to 3, the project’s basic objective quantifies potential hydroelectric power in three categories at potential sites within the control area:

– Cost: price ranges for access, construction and transmission; and

About 60 potential sites and/or site alternatives were identified through a review of government documents, publically available published databases and site feasibility reports. The first filter applied to all sites was whether they were within a reasonable distance of existing SEAPA transmission. Reasonable, in this context, means the size of the potential resource justifies the expected connection costs. Each site meeting the transmission criteria was considered for further analysis based on its unique characteristics. This initial filter reduced the number of potential sites to 22, with the original documentation of the culled sites retained in the e-library.

SDDs are iterative products that advance up to three levels of increasingly rigorous analysis. Once a site reaches level 3 based on cost, risk, and value; the site is classified as viable and then is subject to system analysis efforts to determine the question of development timing. The larger the project, the longer into the future for a projected commissioning date as the control area demand is slowly growing (0.5% per year average).

While additional information or analysis might provide more value, if the determination is made that additional effort would not change the conclusion of whether to develop the site, then evaluation stops and a summary of findings is assembled. The summary of findings provides a written overview of the key factors affecting site development. This includes a discussion of all the alternatives evaluated, as well as the rationale supporting the decision not to take the evaluation to the next level.

Level 1 involves a basic evaluation of a site that has passed through the initial filter, and it consists of the following:

If a fatal flaw, such as a restrictive LUD or unreasonable length of transmission, is identified at this stage, the evaluation is terminated and a summary of findings is prepared. If no fatal flaws are identified and additional evaluation is required, the site and relevant SDD are passed on to Level 2.

Level 2 involves a feasibility level-planning phase. A team of biologists and engineers physically conducts an on-site survey to ensure that a comprehensive and current record of site conditions is documented. After review, if no fatal flaws are discovered during the feasibility planning phase, the site alternative and affected SDDs are passed on to Level 3.

Level 3 involves the engineering level planning phase. This is the most comprehensive and in-depth phase of the HSE and may involve direct field observations to advance the understanding of bathymetry, fish behavior and barrier assessments; land survey of key elevations, installation of stream gages; and detailed constructability factors. A concerted effort is made based on the experience of project managers to use an appropriate level of technology to advance the assessment. Once the necessary observations are made and data are collected, the SDDs are updated to reflect this new information.

The analytical process for each site concludes with a summary of findings document that discusses completed analysis, the recommendation and supporting rationale for continuing evaluation of the site beyond the current investigation level and effort, or discontinuing any further efforts.

This HSE excludes detailed economic and power market analysis. These are important factors that would be necessary for a site developer to consider in determining if a specific project is feasible given financing options and annual operations and maintenance expenses. The goal of the project is to provide the necessary site information such that an economic and market analysis specific to the developer’s situation can be efficiently executed.

SEAPA is developing the HSE workbook,an online database that houses historical and new information used to create live working documents. The most powerful attribute of this tool is that it aggregates SDDs prepared for the sites and alternatives and provides a centralized location where data analysis can be easily accessed and managed. The HSE workbook also provides for an easy comparison among sites and site alternatives related to power generation, hydrologic, construction cost and regulatory data. It also identifies costs, risks and value for developing potential hydro sites.

The next steps in SEAPA’s five-year project include identifying and evaluating new sites, amending the TNF Forest Plan, and collaboration with ADF&G regarding development of information related to fisheries issues.

Eric Wolfe is a hydro engineering and planning professional for Southeast Alaska Power Agency. Steve Padula is the regulatory/natural resources practice lead and Kelcie Nice is a regulatory specialist and water resource engineer in training for McMillen Jacobs Associates.