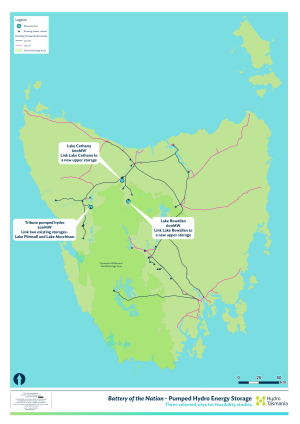 Hydro Tasmania says it is accelerating detailed investigation of three key opportunities for pumped storage hydro development in the state as part of the Battery of the Nation initiative. Work has begun on a full feasibility assessment of pumped hydro development opportunities at Lake Cethana and Lake Rowallan in the northwest and near Tribute Power Station on the West Coast.

The Board of Hydro Tasmania has approved funding for this work to begin, as part of the first tranche of investment by Hydro Tasmania of up to $30 million for deeper studies of the three options. The studies will identify a single pumped hydro project that can be ready to operate when 1,200 MW of additional Bass Strait interconnection comes online.

Hydro Tasmania Chief Executive Officer Steve Davy said it was an exciting time for the business, with the next stage demonstrating that real progress is being made. “A key focus of the Battery of the Nation initiative is to take the Tasmanian community with us on this journey, particularly those living near the proposed pumped hydro sites that we are investigating,” he said. “We are committed to providing those communities with information at every stage and seeking their input on what matters to them. We want to make sure that the projects we pursue will deliver benefits to Tasmania, and to Tasmanian communities.”

Kane Thornton, chief executive of the Clean Energy Council, welcomed the announcement, noting that Tasmania would be an important part of Australia’s transition to a clean energy future. “Australia will be completely powered by renewable energy at some point in the next few decades. This presents a need, and an enormous opportunity for Tasmania’s hydropower to play a critical role in supporting Australia’s transition,” he said. “The construction of Tasmania’s hydropower system a century ago was a remarkable nation-building project, and the next generation of projects in Battery of the Nation and Marinus Link is just as exciting.”

The announcement comes the day after Hydro Tasmania’s inaugural Future Forum, which focused on the workforce challenge to deliver Tasmania’s renewable energy opportunities and the importance of collaboration across sectors to maximize the potential benefits.

Early modelling shows unlocking Tasmania’s renewable energy potential could generate billions of dollars of investment and thousands of jobs. This presents both opportunities and challenges as Tasmania seeks to maximize the benefits of what could potentially be a 20-year program of renewable energy projects.