With the eyes of the world on Russia as Sochi hosts the 22nd Winter Olympic Games, HRW-Hydro Review Worldwide chief editor David Appleyard and HydroWorld.com online editor Michael Harris turn their eyes to the state of Russia’s power market.

The editors have identified a number of key areas and issues, and an upcoming international forum at which they will be discussed.

During the past decade, Russia’s power market has shifted from Soviet styled planning to a western market-based model. The mission was to close the vast investment gap created during the 1990s. The Russian power sector needs around $600-$800 billion until 2030, so policymakers continuously battle to find the right balance between channelling crucial investment and maintaining reasonable end user power costs. 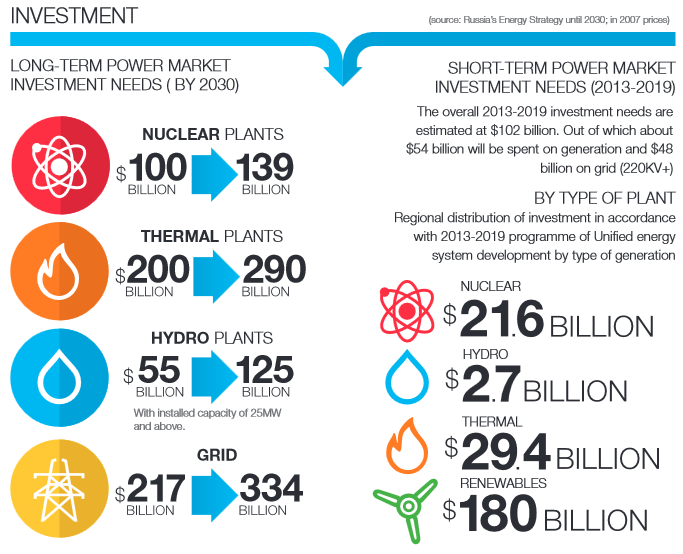 Less than a decade ago, enthusiasm for Russia’s power sector was well documented with foreign and domestic operators, manufacturers of power equipment, and service providers all lining up to take a piece of Russia’s vast power industry potential.

At first, several newly established market mechanisms appeared to give the sector a jumpstart. But the jumpstart was short-lived as the impact of the overall global economic crisis swiftly dampened the momentum of the country’s power sector revitalization plans. Likened with gross domestic product as an important factor that underpins investor confidence, power consumption collapsed but importantly end-user power costs continued to accelerate.

Power costs were growing quickly owing to mounting investment needs filtering through the value chain, as well as making up for prior years of comparatively low prices. Russian industrials, the most influential power consumers who make up some 55% of national power consumption, pressed their concerns over price growth on the government leading to some restructuring of the market mechanisms, but any reaction from policymakers also provoked market uncertainty.

Naturally, this act is adding some strain to the investment plans for several power sector participants with some reigning in their overall capital investment plans. Nevertheless, national concerns over dangerously low energy security and high inefficiencies within the system continue to drive policymakers towards finding funding to avert a power crisis. Paradoxically, to some extent, downward pressure on power wholesale prices mean asset owners must invest into efficiency or face significant financial distress for running expensive assets. It is evident through a series of recent press releases that asset owners view operational efficiency as a critical challenge in the short term.

A major part of the solution is to find efficiencies by reducing Russia’s energy intensity to be more in line with Russia’s peers–Russia is currently two and a half times more energy intensive than the most comparable countries outside of the Former Soviet Union. Therefore, Russian policymakers are centering their investment focus on lowing energy intensity, targeting 40% by 2020. Essentially, Russia’s efficiency drive means asset owners will continue to attract best practices and technology from all over the world into power generation, consumption, and grid, albeit at a slower pace than originally planned before the economic crisis in 2008.

State plans for considerable revitalization of the power sector

Given the apparent low maturity of Russia’s power sector and its obvious challenges, over the mid-term the state will combine market forces with a degree of centralized planning; and new polices will be contrived to steer investors accordingly. In accordance with Russia’s energy strategy until 2030, and a revised General Scheme of Power Assets’ Location Until 2020 with a View Until 2030, Russia’s total need for new generating capacity is estimated at around 173 GW, out of which an estimated 12 GW of new hydro capacity is anticipated, along with 6 GW of renewable capacity. This compares with 112 GW of thermal capacity and 43 GW of nuclear capacity.

It is also common practice for the Russian government to adjust the strategic long-term view of sector development based on a General Scheme at regular intervals. This approach aids investment and capacity forecasts and supports a more realistic socio-economic development plan. The latest program and scheme of unified power system development covers the period between 2013 and 2019. In accordance with the program the power sector investment plan during this seven year period is estimated at $102 billion, out of which $54 billion will be invested into generation and $48 billion into grid.

And, subject to an improvement in Russia’s economy, the power sector could gain a further 19 GW of new generating capacity within the same period. 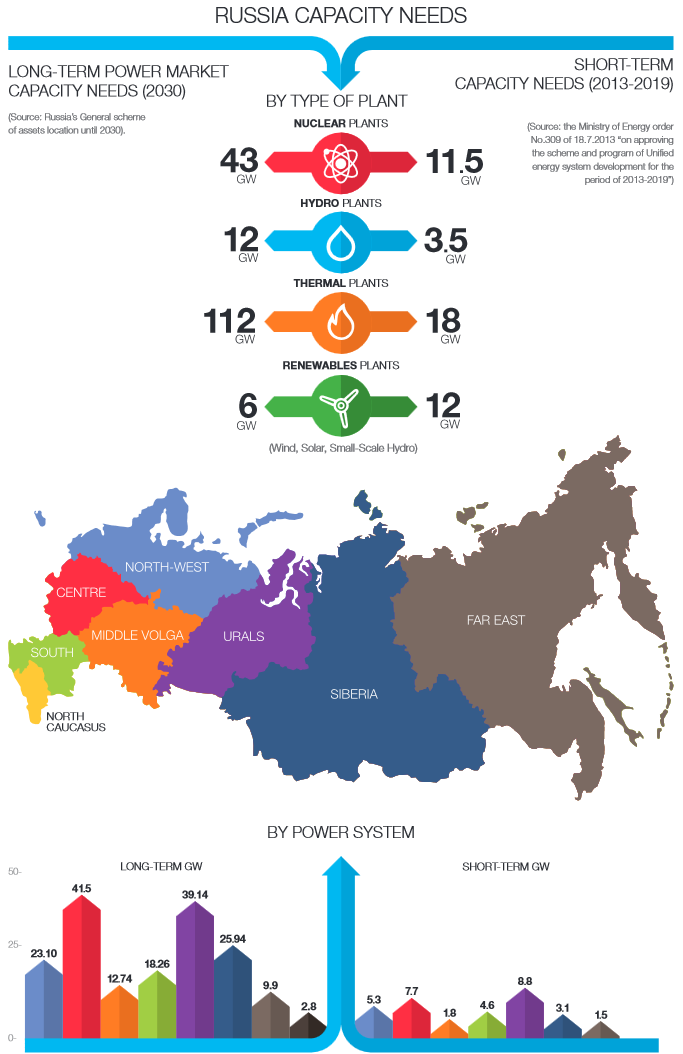 The most recent guideline on power sector development on a province by province basis has been spelled out in the latest scheme of territorial power sector planning until 2030.

Policymakers hope to complement the top-down approach to sector development and bring more certainty to any strategic plan conceived previously on commissioning generating and grid projects. Nevertheless, while it incorporates detailed information on power sector needs sourced from local authorities in charge of territorial planning, governmental bodies involved with the power sector development, engineering companies, and legal entities interested in power sector growth, one should view the document as a guideline in assessing the power sector’s growth potential on a provincial basis. Therefore, the government warns the dates of assets commissioning, type of equipment, and installed capacity might change over time and vary from original estimates.

Despite a strong trend for distributed generation in many parts of Russia, the so-called Territorial Scheme puts its main emphasis on commissioning large-scale centralized generation. By 2030, Russian provinces expect 157,664 MW of installed thermal capacity as well as 22,561 MW of installed hydro capacity and 6,060 MW of wind power. The scheme outlines a continued dominant share of thermal generation in the future structure of Russia’s power sector but notably its appetite for building large-scale hydropower generation has increased from its original 12 GW to 22.5 GW.

The state plan for maximizing the use of hydropower generation in Russia also has been reflected in RusHydro’s (Russia’s state hydropower company and Russia’s largest power generating company) investment program. In 2012-2013, the company planned to commission 8 GW of new hydropower and pump storage capacity, which is nearly three times more than the volume of hydropower that has been launched between 2000 and 2010.

The company also plans to place on line about 1 GW of new capacity annually until 2025 following an extensive modernization program of Volga-Kama hydropower plants. In addition, by 2014 RusHydro anticipates bringing Sayano-Shushinsk hydropower plant’s capacity to its pre-incident levels, and fully complete replacements of reinstated units by 2016. RusHydro’s ambitious plans in the Far East, where it is the monopoly player, include increasing its annual output of hydropower by as much 50% or 13 TWh by 2025.

Russia’s appetite for building renewable generation was cemented in May 2013 when the state approved a number of legislative acts supporting investment into renewable power. The first renewable plan covers the period until 2020. By then the government plans to build 6 GW of renewable generation, out of which 61% will be wind generation, 26% solar power, and 13% small-scale hydro generation. However, while the first annual auction of renewable projects to be launched between 2014 and 2017 took place in September 2013, no bids were registered for small-scale hydropower projects.

Nonetheless, the Russian power sector has received several readjustments, and will continue to receive further changes and enhancements. Assets owners throughout the value chain will feel significant pressure to improve efficiency while new investment schemes to encourage funds will become considerably more targeted than earlier plans.

To some extent, the state hopes that holding down power prices will press asset owners to refurbish–as facing financial losses will be sufficient encouragement. This strategy may appear harsh but it has some merit. Special investment schemes, loosely following Russia’s territorial plan, to attract targeted investment will have a lesser impact on prices in the broader market, thus helping to take the impetus out of power price growth but also moving towards getting asset refurbishment moving. 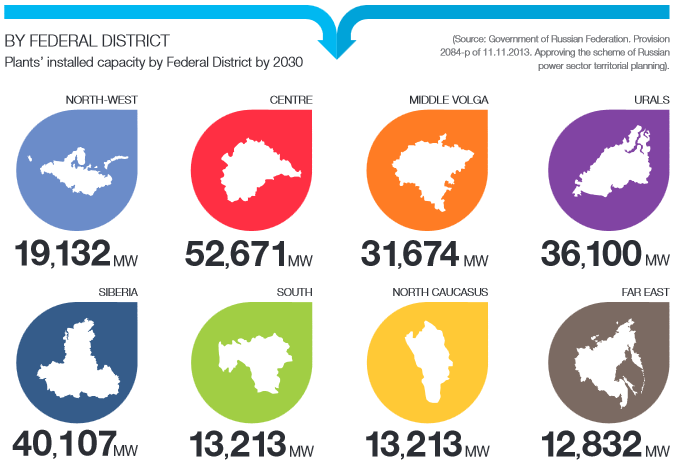 What the numbers mean for hydropower developers

With close to US$3 billion expected to be injected into the market through the end of the decade, Russia’s hydroelectric sector should be an expanding one.

How to best capitalize in this growing segment will be a key topic during a number of sessions at the upcoming HydroVision Russia 2014 Conference and Exhibition, which is again co-located with Russia Power in Moscow.

Representatives from a number of prominent international organizations and companies are taking part, with discussions designed to highlight hydropower’s role in the growing Russian energy market.

Also March 5 is “Focus on Development in Eastern Russia”. The region — under-developed compared to Russia’s more urbanized European region — is expected to grow in overall installed capacity by more than 12,800 MW through 2030, making it an area of growth. This session will feature representatives from RAO Energy System of East, EuroSibEnergo, the Bureiskaya hydropower plant, and RusHydro.

Securing funding for hydroelectric projects will then be discussed in “Russian Power Sector: End of Uncertainty Era? How EBRD Can Help – Investment Challenges and Opportunities”, which will include Aida Sitdikova, Director for Energy and Natural Resources for Russia dn Central Asia, European Bank for Reconstruction and Development.

HydroVision Russia 2014 takes place March 4-6 at the Moscow Expocentre. Registrations are still available for the event.