Fusegate system developer Hydroplus Inc. has been awarded a pair of contracts for work on two Pennsylvania dams.

Hydroplus was recently selected to install Fusegate Systems at the Pikes Creek Dam in Wilkes-Barre, and the Springton Dam in Media.

The company said it was selected by the Pennsylvania-American Water Company for work on its Pikes Creek project after it was discovered that the dam had several safety deficiencies, including an inadequate spillway capacity.

Hydroplus said it worked with PAWC’s main consultant, Gannett Fleming Inc., to design the Fusegates used for the project.

According to Hydroplus, the project includes the removal of existing flashboards at the auxiliary spillway, lowering the spillway sill and installing a 9.33-foot-high by 13.89-foot-wide Fusegate System. The gates will be made in pre-cast concrete with steel inlet wells.

Engineering work on the Pikes Creek project will be completed by the end of the year, with construction taking place in 2016. 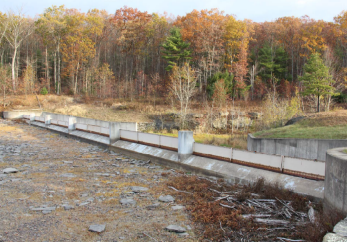 The project will see Springton’s spillway sill lowered and a 4.5-foot-high by 20-foot-wide Fusegate modules installed along the 300-foot-wide spillway. The gates will be made in pre-cast concrete with steel inlet wells, Hydroplus said.

At Springton dam, unlike the conventional design where each inlet well is located directly on the Fusegate’s crest, they will be gathered in two separate enclosed structures on both spillway abutments in order to cope with hydraulic constraints of the spillway. The inlet wells will be connected to the Fusegates’ chambers by pipes embedded in the spillway sill.

The company will serve as subcontractor to the selected general civil contractor in supplying and installing the Fusegates during the construction stage. 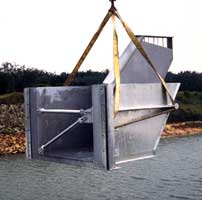 Fusegates — described by the Tampa-based company as an alternative solution to conventional systems like radial gates, flap gates, inflatable dams and fuse plugs — are modular units installed side-by-side on a dam’s spillway crest. The individual modules are held in place by gravity and then linked by sealing joints, creating a watertight wall that increases reservoir capacity or flood discharge potential.

For a moderate range of reservoir levels, the water flows over the Fusegates as it would over a fixed weir.

Each Fusegate is equipped with an inlet well that is connected to a chamber at the base of the unit. If the reservoir level exceeds some predetermined value that corresponds to a very low probability flood event, water starts spilling inside the base chamber through the inlet well and causes one or more Fusegate to overturn by the uplift pressure generated.