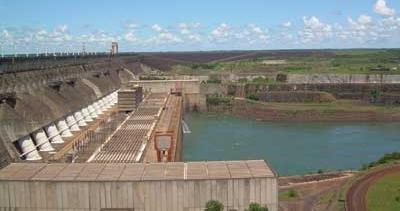 Brazilian energy regulator Agencia Nacional de Energia Eletrica (ANEEL) reports hydroelectric generators paid 1.1 billion reais (US$488 million) in the first half of 2014 in compensation to local, state and national governments for use of Brazil’s water resources.

Of that total, ANEEL said Brazil’s hydro generators paid 896.6 million reais (US$396.3 million) as compensation for water resources use, “compensacao financeira pela utilizacao de recursos hidrocos” (CFURH), while the remaining 295.9 million reais (US$130.8 million) was in the form of royalties paid by the bi-national, 14,000-MW Itaipu hydroelectric project. Brazil and Paraguay recently celebrated the 40th anniversary of the Itaipu project on the Parana River.

Municipalities and states each receive 45 percent shares of collections. The money may be used for health, education and safety programs but not to pay staff or reduce debt, unless the creditor is the national government.