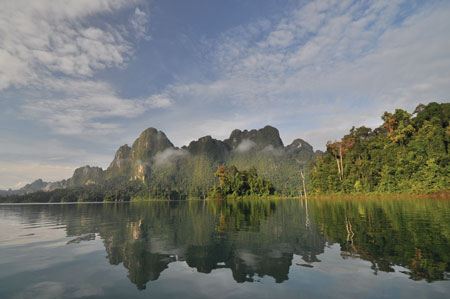 An operational assessment of four hydropower plants in Southeast Asia revealed that gains in both energy production and water conservation could be achieved with little monetary investment through operational optimization efforts.

The site assessments aimed to obtain a better understanding of:

The latter refers to both using the units to most efficiently meet load (i.e. “optimized unit dispatch”) and scheduling optimization, where the hydropower scheduler assigns each unit’s output at points that align with the peak efficiency points of the plant. Scheduling efficiency is computed by taking the difference between the optimized plant efficiency of the actual plant power and the peak point of the optimized plant efficiency curve for the same number of operating units. The difference between the actual and peak efficiencies determines the quantity of additional energy that could be generated if the water volume used to produce energy at the actual power level is used to produce energy at peak efficiency.

– Maintenance programs and equipment conditions: The second objective was to gain an overview of plant maintenance practices and to identify potential performance improvements resulting from equipment upgrades. These included upgrading turbines, and/or maintaining equipment at risk for that may cause outages.

– Water quality of turbine releases: The third objective was to provide recommendations to document and mitigate any water quality impacts resulting from plant operations. Water quality is important not only for the maintenance of the plant, but also for guaranteeing minimum flow requirements, temperatures and oxygen content for aquatic life downstream.

– Potential benefits from hydropower system optimization: The final objective was to provide information regarding the benefits and techniques to operate individual plants to accommodate system-wide objectives. These objectives included coordinating plants to minimize system-wide spill and to maximize production; maintaining reservoir levels for flood control; managing reservoir levels to enhance the water quality of the reservoir and of hydropower releases; ensuring the navigability of the river; maintaining water accessibility; and controlling reservoir level for recreation.

The plants’ operations and scheduling were separately evaluated using the Hydroplant Performance Calculator (HPC), which streamlines the calculation for both operation and scheduling efficiencies. The HPC was selected because it was easy to use, available and free.

The primary components of the analyses are an optimization engine based on a reduced gradient solver in Microsoft Excel and a computation engine. These tools and their underlying mechanics have been detailed in a number of reports (recently, ORNL, 2012; and March et al., 2014, amongst others) and provide lookup tables that can be used to optimize both operation and scheduling efficiency.

The 300-MW Vajiralongkorn plant has three nominally identical Francis units and is located on the Khwae Noi River in Kanchanaburi Province, Thailand. The plant’s production from January 2014 to July 2015 represented roughly 0.6% of domestic electricity in Thailand. The majority of energy generation during this time took place between 14% and 59% of maximum head and was evenly distributed among the three units.

A comparison of optimal efficiency and actual operational data at the most common head percent of 78.2 was used to identify where performance improvements could take place. When three units operate beyond 53% maximum plant power, the majority of operational points lie close to or along the best efficiency line, indicating hydro operations are relatively efficient.

Between 27% and 53% of maximum power, when two units are running, plant efficiency is notably lower than optimum efficiency on several occasions. Out of all operational hours plotted, the actual plant efficiency was at least 5% less than optimum more than 10% of the time. A majority of these occurrences took place during a transition to three units from one, or vice versa, presumably reflecting the ramp up or down of generation to meet demand.

Several observations were made over the course of investigating the performance of Vajiralongkorn. The first was that when all three units operate simultaneously, plant efficiency is generally very high, with actual unit dispatch nearly matching optimum unit dispatch. In these instances, small but deliberate changes in the distribution of generation among units could provide incremental improvements in efficiency when the plant is transitioning between one unit and three.

An important aspect to note for this analysis is the use of hourly data points. The data sample taken for that hour is assumed to be how the unit operated for that hour, which may not be the case. These results represent a coarse, first order approximation that should be used to further explore how ramp rates and unit dispatch order can be fine-tuned and improved to achieve the optimum plant efficiency.

Assuming optimal dispatch had been carried out during the hours examined, the total efficiency increase achievable at Vajiralongkorn would have been 2.1% to 2.6%. Had the plant achieved these improvements, more than 178.1 million m3 of water would have been conserved in the upper reservoir. If this conserved water had been used for optimal generation, an additional 2.3% of electricity could have been supplied to the grid. The annual water conservation opportunity is equivalent to about 10 days of daily inflow during 2014, or nearly 1% of the reservoir’s average total storage. If these values are the projected over 30 years, the water conservation opportunity is nearly 40% of the total reservoir capacity and the lost electricity opportunity represents more than 60% of the annual generation.

The 240-MW Rajjaprabha plant has three nominally identical Francis units and is located in the Ban Tan Khun District on Thailand’s Klong Saeng River. The plant’s operations, evaluated from January 2014 to July 2015, represented roughly 0.38% of the country’s domestic electricity production. The following results do not include any operational data from Aug. 18, 2014, through Oct. 28, 2014, because Unit 2 was unavailable for generation and thus full plant optimization was not possible. From 2014 through mid-2015, the majority of generation took place between 89.1% and 96.6% of maximum plant head, with a slight preference for Units 1 and 2 over Unit 3.

Opportunities for performance improvements are similar to those at Vajiralongkorn. When the plant was operating at greater than 50% of its maximum capacity, the plant operational efficiency was typically within a few percentage points of the optimum plant efficiency. But during operation between 33.3% and 53.3% of maximum capacity, when two units were operational, the efficiency was notably lower than optimum on multiple occasions. Out of all the hours plotted, the actual efficiency was at least 5% less than optimum nearly 8% of the time. At Rajjaprabha the efficiency was notably lower than optimum during a transition to three units from one unit, or vice versa, presumably reflecting ramp ups or down.

Assuming optimal dispatch was carried out during the period examined, the total efficiency increase achievable would have been 1.4% to 2.2%. Had the plant achieved those improvements, an additional 58.5 million m3 of water would have been conserved. If this conserved water had been used for optimal generation, an additional 1.7% of electricity could have been supplied. The annual conservation opportunity would be equal to about six days of inflow in 2014, or nearly 1% of Rajjaparbha’s total storage. Over 30 years, the conservation would equal nearly 40% of the total reservoir capacity, with the lost electricity representing more than 60% of the annual production.

The 64-MW Nam Leuk powerhouse contains two 32-MW vertical Francis turbines and is located on the Nam Leuk River in Laos’ Vientiane Province. The plant’s annual average production is about 1.3% of Electricite du Laos’ total generating capacity. Operational data from 2015 was provided for analyses, which demonstrated that the majority of electricity was generated at 90% to 97% of maximum head, with Unit 1 producing roughly twice the electricity of Unit 2.

Analysis of the data showed that Nam Leuk’s operational efficiency was nearly 100%, or that the dispatch was optimized and improvements to be gained with modified unit dispatch are less than 1/10th of 1%, which is deemed to be within the uncertainty of the measurements.

This is because the optimized unit dispatch is implemented by using a single unit up to the maximum unit load, then using two units at the same load for plant loads that exceed the single unit’s maximum capacity. The analysis of the data demonstrated Nam Leuk followed this dispatch sequence for the entire year, resulting in the maximum operational efficiency. Similarly, a scheduling efficiency analysis for 2015 showed plant load schedules are optimized, and potential improvements to scheduling efficiency are also less than 1/10th of 1%.

From this data, there are no obvious opportunities to improve this facility’s performance.

The Nam Ngum 1 plant is located on the Nam Ngum River near Vientiane in Laos. It was the first hydropower plant to be built in the country and is comprised of two 17.5-MW Francis and three 40-MW Francis turbines. On average, it provides about 8.5% of Laos’ annual electricity production. Operational data from 2009 through 2015 was used for the analysis.

Data demonstrated that a majority of power was produced between 85% and 95.7% of the maximum head and that Units 1 and 2, with smaller installed capacities, produced about 40% of the annual generation of the larger Units 3 and 5. Unit 4 was offline from early January through July in 2014, after which it resumed normal production.

Operational analysis for Nam Ngum 1 shows the plant could achieve, on average, efficiency improvements of roughly 0.2%. If the plant had optimized operations for seven years to save water, an additional 152 million m3 could have been conserved in the upper reservoir, translating to about 2% of its total estimated capacity.

Along a similar line, analysis of its scheduling efficiency demonstrated it could achieve only very small improvements in generation efficiency with modified plant scheduling, ranging from 0.1% to 0.2%.

The International Hydropower Association considers optimization of an existing hydro plant – by modifying operational regimes and equipment – to be the most important sustainable hydropower activity. Conducting technical assessments to quantify the efficiency gains achievable through optimization is a significant step toward improving regional hydropower sustainability.

Without consideration of operational constraints, efficiency improvements of 0.001% to 2.3% could have been achieved at the four hydro plants studied through optimization.

Using Vajiralongkorn as an example, assuming the optimal dispatch had been carried out during all hours during the data analysis period, the total efficiency increase would have been 2.1% to 2.6%.

Two main factors influenced the results: mode of operation and accuracy of the unit characteristics. The projects in Thailand analyzed in this study operated as peaking facilities, with energy provided only during periods of high demand.

The ramping up and down such units would experience generally requires more sophisticated optimization, leaving greater room for improvements if a plant has not yet been automated based on optimum unit dispatch.

The plants in Laos operated at full load and peak efficiency nearly all the time. Because there was little deviation from the best efficiency points during normal operation, there was little from for improvement. However, at Nam Leuk, the efficiency curve for all units was generated from outdated index measurements of a single unit; and at Nam Ngum 1, the manufacturer prototype curves were used instead of actual unit data.

Without an accurate measurement of present efficiency characteristics, there is a degree of uncertainty in the precise shape of the plant efficiency curve, and the potential for efficiency improvements may be greater than what is presented in this study.

Additional technical and procedural recommendations to improve efficiency and sustainability based on site visit observations and technical assessments were discussed in detail with the facility operators. They fall into four broad categories:

The U.S. is still communicating and trying to propose collaborative work with South East Asia countries to align a program that could help establish a path forward to achieve the recommendations based on the assessed hydropower facilities in Thailand and Laos.