Does the hydroelectric power industry change that much over the years? To find out, we took a look back at topics discussed in Hydro Review in 2002 and 2006, when HydroVision International was previously in Portland. 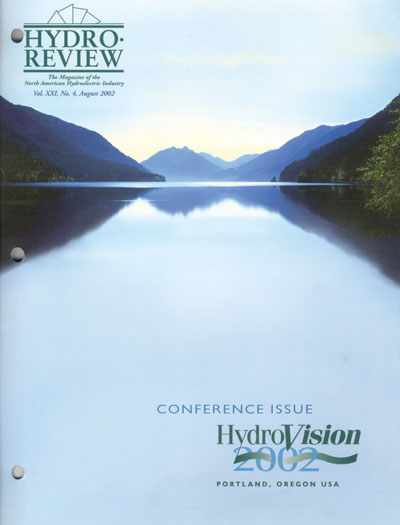 So I was curious about how times have changed in the past 13 years. Are hydropower industry topics that were hot in 2002 and 2006 still hot today? This article gives a glimpse at the content of the magazine issues that were distributed to attendees at this event, giving some insight into how things have changed (or stayed the same).

What do you see as the trends? I give just a bit of analysis below, but I also want to let you draw your own conclusions based on the available data.

Topics of interest this year, from the nine articles published, appear to focus on operations, new development and market issues, with a significant focus on more technical, peer- reviewed articles.

Synopsis: In a unique partnership of two renewable energy sources in southern California, power from a mountaintop wind farm will refill the upper reservoir of a 70-MW pumped-storage plant at night. The pumped-storage plant then will generate valuable peaking power during the day.

Synopsis: The North American electricity industry is slowly being restructured, bringing competition to both the wholesale and retail electricity supply markets. This article provides a brief overview on the status of market restructuring in selected states and provinces.

Synopsis: For hydro projects in geographical areas shared with Indian tribes, the work of establishing and maintaining long-term relationships with these neighbors requires a significant commitment of time and financial resources, along with a willingness to rethink traditional approaches. Yet, as several hydro project owners illustrate in this article, the results can be well worth the effort.

Synopsis: More than a decade after his untimely death, Kenneth Henwood is fondly remembered as a tireless hydropower advocate. Recollections of Henwood remain vivid for those who witnessed the power that a mix of strong convictions, deep knowledge and common sense can yield.

— “Determining Earthquake Loading on Spillway Gates” by Robert V. Todd with the U.S. Department of the Interior’s Bureau of Reclamation (technical article)

Synopsis: Standard techniques for designing dams in earthquake-prone areas rely on theories developed for rigid concrete structures. How do these theories hold up for steel spillway gates? Field tests of gate vibration data at two dams in California provide insights on earthquake safety for spillway gates.

Synopsis: Biologists commonly use recapture techniques to evaluate the overall effectiveness of devices for diverting fish at hydro projects. A recent study at a hydro plant in Newfoundland, Canada, demonstrates how radio-tagging methods can add valuable details about why a diversion device performs as it does.

Synopsis: Purchasing spare components for a hydroelectric plant involves considerable expenditure for an uncertain benefit. In deciding whether, and when, to purchase spares, Canadian utility Hydro-Quebec is using risk analysis tools to quantify costs and benefits.

Synopsis: Proper calibration of current meters in performance testing is essential in developing reliable estimates of unit performance and efficiency. Results of a research project spanning several years and locations provide insights on how to account for the many factors that potentially affect intake current meter readings. 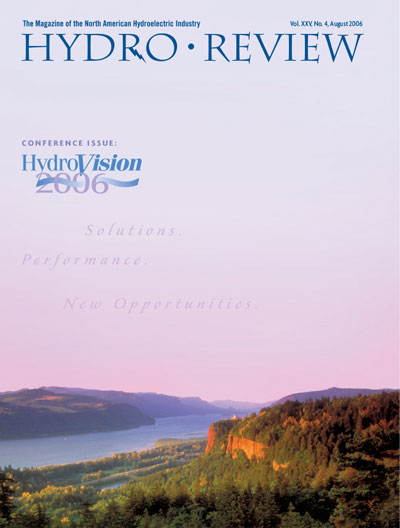 This year, topics covered in the magazine are a little “softer,” focusing on relicensing, community relations and recreational issues. There is still plenty of technical, peer-reviewed information in the magazine, just not quite as much as in 2002.

Synopsis: During an upgrade of its 676-MW Shasta project in California, the U.S. Department of the Interior’s Bureau of Reclamation learned several important lessons about financing and then prioritizing rehabilitation work. The experience changed the way Reclamation approaches project rehab in the state.

Synopsis: Reaching agreement about how best to operate the New York Power Authority’s 2,538-MW Niagara Power Project for the next 50 years was no easy task. In the process of applying for a new Federal Energy Regulatory Commission operating license, the utility garnered insights that can be useful to others starting a relicensing.

Synopsis: For Idaho Power Company, cloud seeding is a viable and valuable long-term program capable of making significant contributions toward keeping costs low for the utility and ultimately for its customers.

— “Teaming with a Local Community to Share a Hydro Site with the Public” by Steven P. Murphy and David J. Youlen with Brookfield Power

Synopsis: The site of the 28-MW Trenton Falls hydro project in Trenton, N.Y., features unique geology, historical landmarks and beautiful waterfalls. To share these aspects with the public, project owner Brookfield Power worked with the local community to build a scenic trail. The trail provides a way to share information, while also ensuring public safety and maintaining site security.

— “Developing a Database to Track Structures on the Shoreline of a Reservoir” by Darrell E. Townsend II with Grand River Dam Authority

Synopsis: Monitoring and permitting more than 10,000 boat docks, water intakes, retaining walls and other hazardous structures along the shoreline of Grand Lake in Oklahoma is a sizeable task. To simplify the process and maintain more accurate information, the Grand River Dam Authority developed a database using geographic information system software.

Synopsis: After rewinding two generators at its 49.1-MW Buchanan Dam on the Lower Colorado River in Texas, the Lower Colorado River Authority experienced several unit trips. These trips were caused by failure of the rotor inter-pole connections on the generators. The rewind contractor developed a unique flexible inter-pole connection design that solved the problem and allowed reliable operation of the units.

Synopsis: The U.S. Army Corps of Engineers is installing removable spillway weirs — known as RSWs — at hydro projects on the lower Snake River to safely and efficiently pass juvenile salmon and steelhead. These structures provide a way for fish to pass the projects at elevations closer to the surface and using less water compared to traditional spill methods.

Synopsis: Through a controls upgrade, Northern California Power Agency significantly reduced output load swings of the two impulse turbines at its 252-MW Collierville project. Load swings are now less than 1 MW, compared to the 10- to 12-MW swings with the old control system. With the improved reliability, the utility successfully participates in the California Independent System Operator ancillary services market.