More than two years on from completion of the Hydropower Sustainability Assessment Protocol, eight assessments have been undertaken on several continents and several assessors have been accredited, with more in the pipeline. Learn about the progress already made, as well as what’s next.

Since then, the Protocol has been applied across the world and on all stages of hydro project development, with key organizations supporting the rollout of the tool through a Sustainability Partner model. In addition, governance and management structures have been designed around the Protocol. Within these structures, training materials have been developed for a range of scenarios, including capacity building training for civil society and industry, materials to help companies prepare for assessments and incorporate the Protocol into business systems, and training for accredited assessors.

An accreditation system for assessors is in place, and the first assessors have completed accreditation. These assessors provide the expert resource for companies wanting to use the Protocol – through training, consultation and assessments – and are the only individuals recognized by the governance council as qualified to undertake this work.

Support from non-industry partners, both within the governance structures and outside, continues to grow with increasing recognition of the role the Protocol can play in guiding decision-making and engagement with projects from actors in governments, civil society and the finance sector.

The Hydropower Sustainability Assessment Protocol is a framework for assessing the sustainability of hydropower projects and promoting the continuous improvement of hydropower sustainability performance. It can be applied anywhere in the world, no matter the type or scale of the hydro project, nor what other uses are made of the associated reservoir.

The Protocol consists of four tools that correspond to the stages of project development: early stage, preparation, implementation and operation. Each tool is made up of up to 23 sustainability topics of most relevance to that stage, covering all aspects of sustainability – environmental, social, technical, financial and institutional. A Protocol assessment report for projects at the preparation, implementation and operation stages will include scores of 1 to 5 for each topic. Scoring is an essential feature, providing a way to communicate the project’s strengths, weaknesses and opportunities. This can show where the operator or developer should most effectively target his or her efforts, and it may support the availability of financing by meeting lenders’ requirements.

This final version of the Protocol was developed through an intensive period of debate and iterative drafting over almost three years, including an inclusive process of stakeholder engagement, by the Hydropower Sustainability Assessment Forum. This inclusivity remains the foundation of the Protocol. The forum was convened by IHA, the World Wildlife Foundation and The Nature Conservancy in 2007 to re-draft an earlier version of the Protocol and included representatives from social and environmental non-governmental organizations, governments of developed and developing countries, financial institutions, industry and development banks. 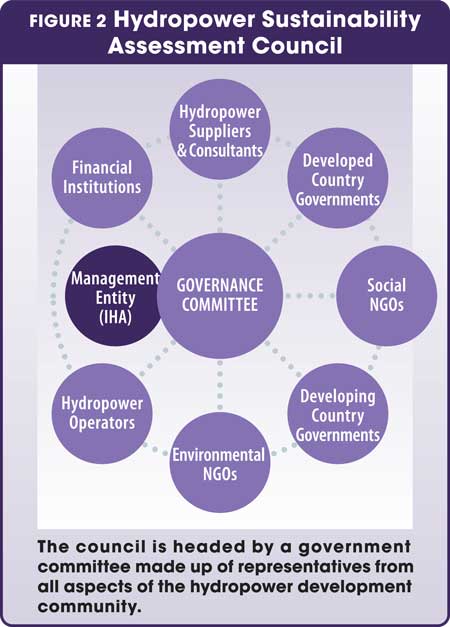 The final Protocol was adopted by IHA in November 2010, receiving statements of support from forum members. WWF referred to it as a “valuable tool to measure and improve the sustainability of hydropower projects.” CitiGroup added, “We have been honored to work with our clients and NGO partners to ensure that the tool complements international standards used by the financial sector – the Equator Principles and underlying IFC Performance Standards – and our own internal sustainability policies and procedures.”

Sustainability partners are leading hydropower companies that partner with IHA to foster understanding of the Protocol and its value. These partners receive training on the Protocol, and their projects are assessed under the partnership in a manner that enables them to incorporate the Protocol not only at the project level, but also within their business systems.

The Protocol delivers an assessment of performance, based on written, verbal and visual evidence. This requires a visit to the project (or intended site) to collect evidence and hold interviews with all stakeholders, including the hydropower operator or developer, communities, civil society organizations and regulators. As of May 1, eight Protocol assessments have been undertaken in Australasia, Europe, North and South America and Asia.

Feedback has been received from several partners. Application of the Protocol provides benefits at the project and corporate level, as explained by E.ON Energie:2 “Following the successful assessment at the Walchensee Power Plant, E.ON Energie concluded that the study’s results can be translated into real benefits because they provide insights for: external stakeholder communication; operational excellence and continuous improvement initiatives; higher employee productivity and excellence in project management; and corporate decision-making regarding prioritization of investments.”

Furthermore, incorporating the Protocol into business systems helps to ensure a consistent consideration of sustainability issues across different departments, says Steven Bartholomeusz with Sarawak Energy Berhad: “We have used the Protocol as a guidance tool to support how we embed sustainability in our business. Considering this, in 2012 we mapped the protocol against the Sarawak Energy Project Model (SPM). Today, our project design and project execution teams use this new roadmap to guide their projects with the support of the Corporate Social Responsibility (CSR) division to ensure that sustainability issues are seriously considered when designing and building hydroelectric projects in Sarawak.”

Under the Hydro4LIFE project, Protocol training workshops (and some assessments) have been delivered to hydropower operators and equipment suppliers in Europe, including E.ON Energie, EDF, Scottish and Southern Energy, Andritz, Alstom and Voith Hydro. The workshops have also been attended by representatives from export credit agencies (OeKB, Coface and Euler Hermes), investment banks (Societe Generale and Credit Agricole), consultants and regulators.

An example of the outcomes of work in this regard is affirmation of the protocol by the Organization for Economic Co-operation and Development (OECD) in its Common Approaches in June 2012.3 IHA has also presented the protocol at several key forums, such as the 17th International Seminar on Hydropower in Vienna in November 2012.

In December 2012, IHA received funding from the Norwegian Agency for Development Cooperation (Norad) under a project to promote and use the Protocol in developing economy countries. The project runs from December 2012 to December 2016 and will demonstrate the value of including sustainability criteria in project decision-making at an early stage. It will also build capacity amongst developing country regulators, regional bodies and civil society in the identified countries.

Quality control and global governance arrangements for the Protocol have been established through terms and conditions for its use and a charter governing the formation and decision-making powers of the Hydropower Sustainability Assessment Council (see Figure 2). The council structure expands on the global, multi-stakeholder approach used to develop the Protocol. The council consists of a series of chambers, each representing a different segment of stakeholders. Chambers have elected chairs and alternate chairs that come together to form a Governance Committee. All decision-making, in the chambers and by the Governance Committee, will be by consensus.

The council also encompasses the management entity, the organization responsible for implementation of the Protocol, including general training and the system for accrediting assessors, translation of protocol content, maintaining the consistency of Protocol application and results, and the development of tools such as a standard report format and assessment database. The management entity currently resides in the Central Office of IHA.

As the Protocol is rolled out, it is important to make sure that it is applied in a consistent manner and at an appropriate standard, ensuring that it will deliver results that are uniform, irrespective of where it is used. The keystone of this is the accreditation of assessors qualified to use the Protocol. The accreditation requirements include completion of a substantial program of training authorized by the council and adoption of a code of conduct, with assessors regulated by a license issued by the Protocol council. Assessors will also need to demonstrate previous experience relevant to the hydropower sector and have participated in at least two assessments under an already accredited assessor before being granted a license.

The course provides a detailed understanding of the Protocol methodology, as well as assessment best practice, following the ISO19011 guidelines for quality and/or environmental management systems (EMS) auditing. Aspiring assessors will also need to be accredited to an auditing course with a high element of the principles of ISO19001 in a relevant field, such as EMS or social auditing.

The first accredited assessors training course took place in London in August 2012, providing accreditation to five assessors. Dr Bernt Rydgren (AF Consult), one of the first accredited assessors, explained: “The Protocol adds significant value to sustainability management in the hydropower sector. It is a sector-specific tool developed in a multi-stakeholder environment, enabling a more effective, targeted assessment of an individual project. One aspect I believe will be especially important for its uptake is the lack of a ‘pass and fail.’ The most significant protocol-implementation experience for me so far is the depth and detail a Protocol assessment can achieve in a comparatively limited amount of time, even of large, complex hydropower projects.” Further courses will be held during 2013.

Only accredited assessors are mandated by the Governance Committee and council to work with companies on the Protocol, including provision of consulting services and assessments. Given the knowledge base being developed through and by this group, which includes a number within the IHA Central Office, it is vital that companies wishing to engage meaningfully with the Protocol do so using individuals accredited in this regard.

Ongoing engagement with financial institutions, development banks, governments and regulators will enable greater awareness of the additional benefits of the protocol use, and IHA and the Governance Committee will work to partner with these key stakeholders in 2013. Implementation of the Protocol will continue through sustainability partnerships, Hydro4LIFE and the Norad project; further assessors will be accredited to expand this body of experts and ensure the uniform application of the Protocol.

The Protocol has also been translated into Chinese, French, Portuguese, Russian and Spanish to encourage its global use, and official translations are available on the Protocol website.

Several regional workshops will be run for key individuals within hydropower developers, operators and owners as an “Introduction to the Protocol.” The IHA World Congress on Advancing Sustainable Hydropower took place in Sarawak, Malaysia, from May 21-24, 2013, with topics focused on key sustainability issues, including the protocol. Before this event, the election of Chamber Council representatives took place at the annual meeting of the Governance Council. A functional and engaged Governance Council will be essential to provide a broad recognition and support of the Protocol by all stakeholders.

2. Mostl, B., and K. Engels, “The Hydropower Sustainability Assessment Protocol in Practice: Lessons Learned from its First Application in Europe,” Proceedings of the 17th International Seminar on Hydropower Plants, Institute for Energy Systems and Thermodynamics, Vienna, Austria, 2012.

3. Recommendation of the Council on Common Approaches for Officially Supported Export Credits and Environmental and Social Due Diligence, OECD, Paris, 2012.

Cameron Ironside is programme director for the International Hydropower Association.