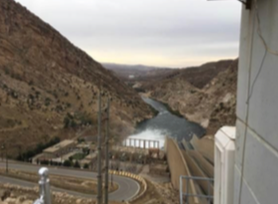 A task force comprised of members from the World Bank and Iraqi Ministry of Water Resources are investigating the impact recent earthquakes might have had on a pair of dams located near the Iraq/Iran border.

Of interest are the Darbandikhan (also spelled “Derbandikhan” and Dokan dams, which house hydropower facilities of 249 MW and 415 MW, respectively.

A 7.3 magnitude earthquake that struck in the same border region November 12 caused “concerns about the safety and management” of the dams, prompting Iraqi Prime Minister Haider Al-Abadi to request assistance from the World Bank.

The World Bank said it will now support Iraq in preparing a diagnostic of any damages caused by the earthquake, review the country’s emergency measures, and help shape an action plan for the dams’ management.

“The World Bank is working hand-in-hand with the government of Iraq teams at the dam locations in carrying out a deep dive assessment of the damage caused by the earthquake, and putting together a rehabilitation plan to address immediate and longer-term concerns,” said Yara Salem, World Bank Iraq Country Manager.

HydroWorld.com reported in 2009 that the Iraqi government had reopened bidding as part of an ongoing rehabilitation program being undertaken at the plants.