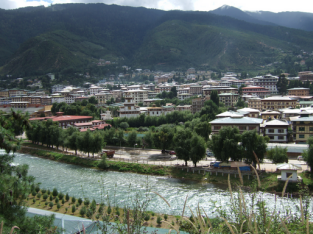 Bhutan and Japanese car manufacturer Nissan have signed a deal that will make use of the Himalayan country’s abundance of hydroelectric power.

Announced at a press conference earlier today, Nissan said it will supply the Bhutan government with a fleet of its electric Leaf vehicles. The same model will also be adopted by taxi services in within the capital city, Thimphu, where Nissan said it will establish a network of charging stations.

Both the company and Bhutan’s government hope the addition of charging stations will persuade more consumers to purchase electric vehicles as the country looks to eliminate automobile emissions.

“We don’t want to rely on and we don’t want to buy fossil fuel,” Bhutan Prime Minister Tshering Togbay said. “An important part of that plan will be sustainable and environmentally-friendly zero-emission transport.”

Nissan marked the announcement by presenting a pair of its Leaf vehicles to Bhutan’s king. What sort of deal the company might offer the government or consumers for adopting its electric car was not disclosed.

“Bhutan has all the ingredients to be a success story when it comes to electric cars,” Nissan-Renault executive Carlos Ghosn said. “This is a country that is saying the future is electric and that it wants to design a transport policy that preserve its environment.”

Bhutan, whose population was below 750,000 people in a 2012 estimate, has a cumulative hydro capacity of about 1,400 MW. A 2012 Worldwatch Institute report said Bhutan is one of only four countries globally to generate all its power from hydropower.

The country is currently studying the feasibility of expanding its hydroelectric capacity even further, with the surplus being sold to Bhutan’s neighbors.