The 1-MW commercial scale turbine traveled from Halifax, Nova Scotia, to the Fundy Ocean Research Centre for Energy (FORCE) deployment site, in the Minas Passage. This site is located about 3 kilometers off the shore of Black Rock. Once on site, the 400-ton device was lowered in less than six hours to its intended location on the ocean floor via a purpose-built barge called the OpenHydro Installer. The turbine rests on the seabed and is held in place by a subsea gravity base designed by OpenHydro and fabricated by Cherubini Metal Works.

Elefant’s testimony to the Senate Subcommittee on Oceans, Atmosphere, Fisheries and Coastguard in November 2009 stressed the value of the National Oceanic and Atmospheric Administration (NOAA) and the role for hydrokinetic energy.

“Over the past five years, our industry has gained momentum with respect to technology advancements and an influx of federal and state funding,” Elefant said. “Stalling deployment of marine renewables at this critical juncture could devastate the industry and drive it overseas.”

The Obama administration has established an Ocean Policy Task Force, charged with developing and recommending a policy that protects, maintains, and restores oceans, coastlines, and the Great Lakes.

Elefant was one of several ocean energy advocates who submitted testimony to the Senate subcommittee, including NOAA Administrator Jane Lubchenco and the Ocean Conservancy Vice President Dennis Takashi-Kelso.

A network of modular floating docks “plugged into” the conventional piers of New York City could produce electricity for city street lights.

This proposal by architect and professor Richard Garber features three vertical turbines fastened to the underside of modular floating dock units. The turbines would spin regardless of the diretion of the river current, producing electricity during both ebb and flow tides. Each module would have a capacity of up to 24 kW, which would provide enough electricity to power 350 light-emitting diode (LED) street lamps.

The docking stations would plug into conventional piers, extending them further into the river to optimize clean energy generation while increasing public green space and tidal pools for wildlife, Garber says. New York City has 578 miles of waterfront. The system would encourage energy awareness by the increased visibility of the connection between the water’s edge and the city’s interior, he says.

Garber is assistant professor of architecture at New Jersey’s Science and Technology University. Garber and his student, Brian Novello, entered the proposal in the 2009 Metropolis Magazine Next Generation Design Competition, where it received a notable mention.

Blue Energy Canada’s vertical axis turbine is designed to be efficiently lift driven, much like modern wind turbines, rather than traditional drag-driven paddle wheel designs. The turbine is composed of vertical hydrofoils attached to a central shaft transmitting torque to a generator.

The turbine is to be housed in a thin concrete caisson that channels water flow to the unit and houses the generator and electrical components above the water surface. The modular units are designed to be stacked to form a “tidal bridge” that actually could be used as a bridge between two land masses. In addition, this system can be used as a platform for offshore wind turbines and can support gas, phone, or power lines, the company said.

Company officials have not yet said where they plan to locate the tidal bridge turbine.

Book available on offshore power, including wave and tidal

This 496-page book outlines the offshore options available in the U.S., including wave and tidal energy projects. Authors Markian M.W. Melnyk and Robert M. Andersen say developers today can draw from the knowledge gained by early offshore oil and gas prospectors, as well as more recent offshore development in Europe. Melnyk is an attorney who specializes in energy regulation and legislative and public policy. Andersen is an attorney whose specialties include environmental infrastructure and green energy. 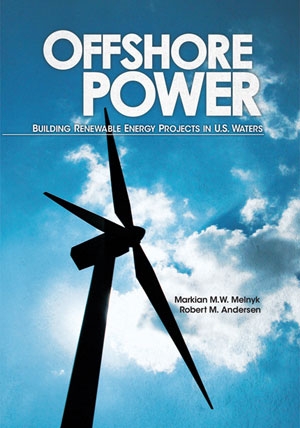 Chapters in the book cover:

The $1 million grant was announced in October 2009. The money will be used to retrofit manufacturing equipment to make buoys that use the continuous wave energy of the ocean to generate power, as well as vertical wind turbines. The company has access to more than 180,000 square feet of climate-controlled manufacturing space.

Engineers with Renewable Energy Composite Solutions are working with the tsunami center at Oregon State University and SAIC, an engineering and technology company in Virginia, to develop its wave technology and build test buoys.

The Marine Technology Society (MTS) has awarded 29 scholarships to students with an interest in ocean technology and instrumentation.

Principle Power Inc. is using a $750,000 grant from the U.S. Department of Energy (DOE) to support the development of its WindFloat technology.

Although the scope of the work has not yet been determined, the money will be used for the design, validation, and levelized cost analysis of the floating support structure for wave and wind energy take-off mechanisms. Project partners include the U.S. National Renewable Energy Lab and Marine Innovation and Technology.

The funds will be used to modify a WindFloat, a support structure for offshore wind turbines, to accommodate wave-energy generation. The patent-pending WindFloat is owned by Principle Power and was conceived by Marine Innovation and Technology.

HydroVolts, a developer of in-stream hydrokinetic turbines, won the National Sustainability Award at the 2009 Cleantech Open. The open is a business competition for startup companies specializing in clean technologies.

HydroVolts, which formerly was called Puget Sound Tidal Power LLC and is based in Seattle, was chosen from 75 semifinalist companies. The company’s prize: $20,000 in services from Cleantech Open sponsors Climate Earth, B Corp., and NetSuite.

HydroVolts develops turbines that enable distributed clean-energy generation from canals, waterways, spillways, rivers, streams, and tidal currents. The company’s Flipwing Turbine consists of hinged blades or paddles that are pushed by the current against the center shaft, driving the rotation. The turbine is designed to be dropped into an open channel. The units have a capacity of 1 to 20 kW each, depending on the current velocity, the company says.

McGinnis Inc. filed an application with the Federal Energy Regulatory Commission in August 2009 to study the feasibility of building a hydrokinetic power project about 500 feet from the Racine Lock and Dam on the Ohio River in Ohio and West Virginia. The proposal calls for ten barge-mounted turbine-generators with a capacity of 350 kW.