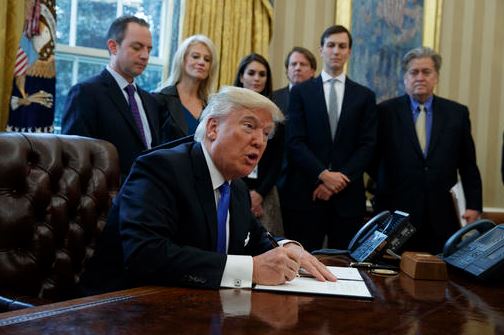 Though the Trump Administration has offered scant details about the role it envisions for hydroelectric power, a document leaked this week by the McClatchy media group could offer clues.

The document, titled “Emergency & National Security Projects“, is a list of 50 national infrastructure priorities compiled for the National Governors Association while President Donald Trump was still President-elect Trump. According to McClatchy, the document and a nearly identical spreadsheet are working documents distributed to NGA members during a meeting in December.

Listed are several provisions with potential ties to the dam infrastructure and hydro sectors, including:

Per Section 11, up to $850 million in federal funding would be administered by the U.S. Army Corps of Engineers to perform repair and safety improvement work at more than 600 dams in South Carolina. These dams, identified as either high or significant hazards, are amongst those damaged during a thousand-year rainfall in 2015 and again in 2016 during Hurricane Matthew. The document says the undertaking could create 2,200 direct jobs.

No. 12: Hydroelectric Plants Operated by the U.S. Army Corps of Engineers

The Corps generates a revenue of $5 billion annually from the hydro projects it owns and operates, the document says, while operating nearly 20% below the industry average of 99% efficiency. Section 12 allocates $4 billion to USACE to upgrade and replace decades-old generating equipment, raising revenues and creating 550 jobs.

Section 21 would provide developer Blackstone Group with $2.2 billion for the Champlain Hudson Power Express transmission line. The link would connect from southern Canada to the New York City area, allowing for the import of up to 1,000 MW of hydroelectric power from Quebec. The project is estimated to create 1,000 direct job years.

No. 49: Energy Storage and Grid Modernization

Fearing blackouts, the “California Public Utilities Commission has mandated a series of mitigation measures, including an expedited procurement for local energy storage sources,” the document says. The report does not specifically mention pumped-storage hydropower — or any specific storage source, for that matter — but does say “the more renewable energy that can be stored during the day, the less need to fire up fossil fuel generators as electricity demand increases in the evening.”

The White House has since expanded on campaign lines with the publication of the “America First Energy Plan“, though President Trump has yet to officially comment on his hydropower’s place in America’s energy mix.