As the number of people attracted to water recreational opportunities at low-head dams will increase in the U.S. during the coming summer months, water-related accidents and deaths are inevitable.

When evaluating dam removal projects, several resource impacts are considered and can vary depending on site-specific conditions. Major issues include:

– Quantity, quality, transport and management of impounded sediment;
– Impacts of dam removal on wetlands and cultural/historical resources; and
– Access to private lands in order to remove the dam.

Should low-head dams have signage warning swimmers and boaters of danger?

Edward William Kern’s 2014 study via Brigham Young University, “Public Safety at Low-Head Dams: Fatality Database and Physical Model of Staggered Deflector Retrofit Alternative,” used public records to amass data that indicates 430 people have died in 222 of these dams across the U.S. since the 1950s.

The danger at many low-head dams, according to Kern, is due to a uniform channel-wide countercurrent — drowning zone or hydraulic jump — which causes upstream directed surface velocities. 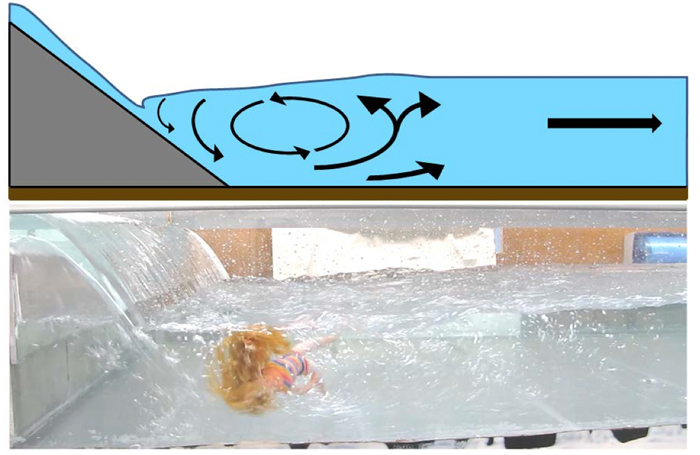 The dangers are real and even casual users should be aware. On April 27, at the low-head dam in Mason City, Iowa, on the Winnebago River, two men were rescued from the undertow at the base of the dam.

According to the Globe Gazette, “The men were rescued from the same spot where a bystander pulled two kayakers to safety on April 17.”

“All hydropower dams licensed by the Federal Energy Regulatory Commission, including low-head types, are required to have a public safety plan that includes appropriate warning signs and other safety devices to protect swimmers, boaters and fishermen,” Tschantz and Wright said.

“However, in a survey of state dam safety programs, only Kentucky, Louisiana, Massachusetts, Pennsylvania and Wisconsin, of 42 responding states, indicated a requirement that some type of warnings or buoys be placed near certain low-head dams.”

Based on the fact that not all states are required to post signage near certain types of low-head dams, it is incumbent on users to educate themselves about the associated inherent dangers.

Tschantz and Wright also said, “Pennsylvania, following several [swimmer fatalities] at low-head dams, enacted a law requiring notified-owners of low-head, run-of-river dams to warn the swimming, fishing and boating public of the hazards posed by such dams by marking upstream/downstream exclusion zones with warning zone signs and other specified markers.”