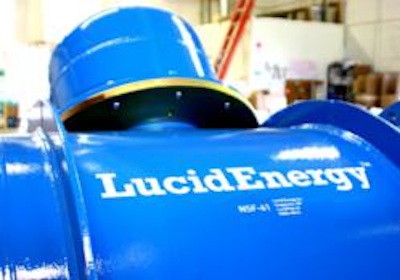 Renewable power developer Lucid Energy has been recognized by Sustainia for its LucidPipe Power System.

Sustainia — an international think tank that focuses on “sustainable transformation in sectors, industries and our everyday life” — named Lucid Energy to its Sustainia100 for the company’s “positive social, economic and environmental impact”.

“There are so many great ideas and promising solutions from around the globe,” said Gregg Semler, President and CEO of Lucid Energy. “It is truly an honor to be named to this prestigious list.”

HydroWorld.com reported earlier this year that the units had been granted NSF/ANSI Standard 61 certification, which followed an announcement in March that the company had also received funds from an Israeli crowd-funding group to expand its operations to international markets.

Lucid Energy was selected from a field of more than 500 nominations that represented 128 countries.

“From Canada to Kenya to Guatemala to India, these solutions are proving that we can build communities that are both environmentally and economically sustainable today and for generations to come,” said former Governor California Arnold Schwarzenegger, who serves as an honorary Sustainia chair.

As a member of the Sustainia100, LucidPipe is now also in consideration for the annual Sustainia Award, which will be given at a ceremony in Copenhagen, Denmark, in November.

For more news about technology and equipment, visit here.