During its more than 40 years of operation, the massive 1,872-MW Ludington pumped-storage plant in Ludington, Mich., has pumped water from Lake Michigan to its 27 billion gallon capacity upper reservoir and generated electricity to meet peak demand. It was built from 1969 to 1973 at a cost of US$315 million. The facility, co-owned by Consumers Energy Co. and Detroit Edison, is operated by Consumers Energy and provides electricity to more than 1.3 million residential customers.

Particularly in the past few years, numerous issues have required increased maintenance, resulting in scheduled outages to perform routine maintenance every two years. The bulk of the maintenance activity during this time was cavitation repair on the pump-turbine runners. Forced outages since the units were commissioned concern various problems with the thrust bearings. Typical observations during the planned and forced outages included:

In 2006, the owners investigated the potential scope of work necessary to enable the plant’s units to operate within the next 30- to 50-year period of the license to be issued in 2019 by the Federal Energy Regulatory Commission. The results of the condition assessment and life extension study performed by Devine Tarbell & Associates (DTA) (now owned by HDR) led the owners to proceed with a major overhaul and upgrade of the entire Ludington facility, beginning with the first unit. 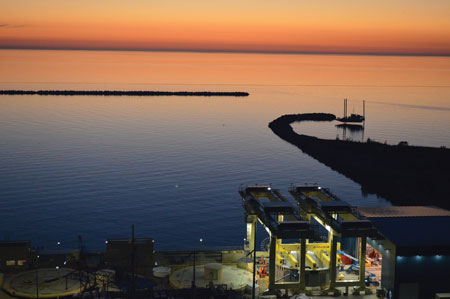 The pump-turbines for the Ludington plant were redesigned by Toshiba using the latest technology to improve efficiency and pump cavitation performance and increase turbine output and pump discharge. The main components that needed to be replaced based on the study included the stay vanes and turbine runners. Draft tube modification was not part of this project and although Toshiba studied several wicket gate designs, the company determined new designs would not dramatically improve pump-turbine performance.

The new pump-turbine design was studied by optimization methodology combined with computational fluid dynamics (CFD) analysis. Pump-turbine hydraulic performance verification and runner blade tunings were carried out by model testing in the Swiss Federal Institute of Technology in Lausanne (EPFL-LMH).

The original stay vanes – 20 per unit – were designed in three different shapes for a better flow angle. The new stay vanes were modified into six different shapes, which contribute to improved efficiency in pumping and generating modes by avoiding flow separation and controlling the wake flow. The trailing edge shape of the modified stay vanes was the same, while the leading edge shapes were optimized to comply with the flow angle in generation mode at each stay vane to avoid flow separation. Modifications involved adding extension pieces to the original stay vanes’ leading and trailing edges to reduce wake flow and control flow angle.

The main goals for hydraulic performance improvement for the new runners include:

To achieve these improvements, Toshiba applied the following technology for the new runner:

By increasing the number of blades, turbine and pump efficiency at normal operating range was improved by about 4%, and it also increased pump discharge characteristics by 15%. Additionally, by using a nine-blade runner, load was reduced on each blade, leading to less cavitation.

A deeper runner means the apparatus has an extended outlet (pump inlet side) on its bottom. Thus, the runner blade length is longer than a typical nine-blade runner, reducing individual blade load.

Changing the number of blades could cause vibration from resonance due to the rotor-stator interaction between runner blades and wicket gates. Therefore, Toshiba carried out dynamic response studies in collaboration with the owner to evaluate the impact of operating using a nine-blade runner.

Rehabilitating each motor-generator will enable the unit to operate reliably within its expected parameters. Rehab will also solve problems and issues that occurred with the current unit configuration, as well as uprating the units from 325 MVA/388 MVA (rated/overload) to 455 MVA based on the increased pump-turbine output. Various analyses and studies were performed to solve the problems and issues (i.e., stator core buckling, stator winding corona and thrust bearing failure). Project engineers decided to replace the entire stator, including the frame, core and windings, and thrust bearings, with improved design and manufacturing practices to alleviate these issues seen previously.

Stator coils were improved by a voltage grading system to mitigate corona activity and a copper cross section to ensure cool operation at a higher MVA output.

Because there were issues on the existing units (i.e., stator winding corona and stator core buckling, in addition to the need to increase thermal capacity of the motor-generator to 455 MVA), engineers decided to replace the stator windings and core. Toshiba performed further studies to prevent reoccurrence of stator core buckling, which is sometimes a problem with hydro generators and motor-generators designed and manufactured decades ago. In many cases, this problem is caused by insufficient clamping force on the stator core and is more likely to occur when the bottom clamping plate is an integral structure with the bottom shelf plate of the stator, as is the case at Ludington.

FEA analysis was performed on original and modified structures to verify the differences and evaluate the modified structure. As part of prudent repairs, engineers replaced the stator frame with independent bottom clamping plates (see Figure 1 on page 15).

The new stator core is constructed with high-grade, non-aging, thin silicon steel laminations. After it is machined, each lamination is coated on both sides with an insulating varnish to minimize eddy current losses.

The insulation performance of the new stator bars was verified by voltage endurance testing following a thermal cycle test as defined in IEEE standards 1043, 1310 and 1553.

At the Ludington pumped-storage plant, the existing thrust bearings had problems that required the replacement of thrust pads every couple of years. Toshiba carried out extensive analyses of the thrust bearing system, including the lower bearing bracket, to learn the cause of the problems. The data revealed:

The original runner was made of carbon steel material and had two divided halves with a crown and band cover, which covered the bolt split flanges. The new runner was made of ASTM A487 CA6NM Class A stainless steel and was designed as a one-piece fabrication. The new runner is large, about 8.4 m in diameter and weighing 270 tons, which are in the world’s largest class as a pump-turbine runner.

One of Consumers Energy’s concerns was the strength of welding seams on the fabricated runner. Consumers Energy and Toshiba decided full-penetration welding would be applied to all the new runner’s welding seams to ensure sufficient strength and extended service life. To verify the strength of the prototype pump-turbine runner and the design life of 50 years, the strength and stress loaded in the runner was analyzed by Toshiba using FEA techniques and it was confirmed that the runner design meets all of the strength requirements as well as the extended service life.

Stay vane extensions were installed at the site to optimize the overall hydraulic efficiency, as previously explained. The extensions were designed to fit the trailing edge and/or leading edge of the original stay vanes, as required. The as-found inspection revealed that the original stay vanes had cavitation damage on wide areas of both the trailing and leading edges. This affected the contact area of the stay vane extensions.

The cavitation damage on the original stay vanes had to be repaired before the extensions could be installed. The stay vane extensions consisted of three pieces: top, middle and bottom. Distortion from heat produced during welding applications was one of the risks to the stay vane and/or stay ring. The owners implemented a welding plan to minimize heat that included the procedure, material, order and stress relief.

Tests confirmed turbine efficiency performance against turbine output increased to a larger output range. Stable turbine operation can be continued at 360 MW turbine capacity with 320 feet of head. The original nominal turbine capacity at the same head was 312 MW. In addition, efficiency of the new runner is the same at partial load range as the original runner.

In the case of pump operation, the pump discharge of the new runner increased about 15% compared with the original at all head ranges.

The stator winding operation temperature met standards for Class F as defined by IEEE and 85K temperature rise, which is the industry standard for Class F.

Unit 1’s major overhaul was completed and turned to commercial operation test on March 12, 2015. The performance test carried out verified that Unit 1 has successfully achieved its target performance.

The major overhaul for Unit 2 was completed in May 2016, and Unit 3 overhaul is under way. The manufacturing for the other units is in progress and barring any unforeseen issues, all six units should be back in service by spring 2020.