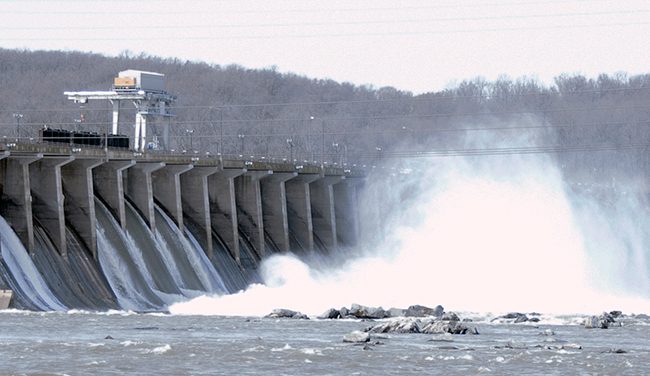 The Maryland Environmental Service has selected a pair of companies to dredge sediment behind Conowingo Dam as part of a pilot program aimed at addressing what the state calls “critical environmental need.”

The contract, awarded to companies operating as the Northgate-Dutra Joint Venture, is a response to a request for proposals issued in August 2017 as part of the Conowingo Capacity Recovery and Innovative Reuse and Beneficial Use Pilot Project.

The pilot project would allow the state to determine whether or not to perform dredging behind Conowingo at a larger scale, with recent reports saying the dam has reached capacity and can no longer stop pollution from entering Chesapeake Bay. This accumulation amounts to more than 160 million tons, according to U.S. Geological Survey estimates, with about three million more tons arriving each year and a ton sloshing over the dam’s gates.

“This project is one element of our multi-prong approach to improving the health of the Chesapeake Bay, and it is another great example of how we are using innovative approaches to solve the most pressing environmental issues,” said Gov. Larry Hogan, who announced the formation of an investigatory commission in July 2016.

The initial test will see Northgate-Dutra perform work on a 25,000 cubic yard demonstration project, under the management of the Maryland Environmental Service and direction of the Governor’s Chesapeake Bay Cabinet.

The dam and the accompanying 572-MW Conowingo hydropower plant were completed in 1928. The structure itself is a concrete gravity dam that has a maximum height of about 94 ft and a total length of 4,648 ft.

The facility is the lowest of a series of dams on the Susquehanna and the last barrier between much of the Chesapeake Bay watershed and the waterway itself.

The state did not say how much it expects to ultimately pay to complete the dredging work when it made the award last week, though the U.S. Army Corps of Engineers has previously estimated the cleanup costs to be in the billions.