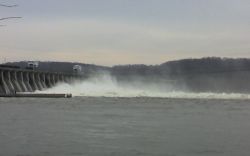 Hydroelectric projects in the regions affected by Hurricane Sandy appear to have weathered the storm well, which is good news but not surprising considering the sturdy nature of most dams.

One dam in the area is Conowingo, on the Susquehanna River in Maryland, upstream from Chesapeake Bay. The floodgates are are open to deal with the high waters created by Hurricane Sandy, but the heavy releases are potentially creating other problems, HydroWorld.com has learned.

State officials say as much as 80% of all pollution in Chesapeake Bay comes from Conowingo Dam via the Susquehanna River, which includes sediment, phosphorus, nitrogen, sewage and other materials that are potentially threatening to fish and other species downstream.

Early reports indicate, however, that Hurricane Sandy has not been as damaging as tropical storms Lee and Katia — both of which affected the Susquehanna River in 2011.

HydroWorld.com reported Conowingo Dam had been previously tested by flooding in June 2006, which saw the facility release a peak flow of 440,000 cubic feet per second. The dam impounds water for a 574.54-MW powerhouse.