The $238 million Mica Switchgear Replacement Project was successful despite a one year construction outage delay, record breaking spring rainfall resulting in rare spillway operation, and extensive safety requirements to mitigate the risks of construction in an underground powerhouse.

In 1973, BC Hydro completed the earthfill Mica Dam, at 244 m (800 ft) in height. Mica Dam impounds Kinbasket Reservoir, which stretches 216 km (134 miles) from Valemount to Golden. The Mica generating facility consists of the switchgear building located at the top of the dam on the west and the underground powerhouse, also on the dam’s west side, but at its base.

Within Mica Generating Station, turbine-generator Units No. 1 and 2 began service in 1976 and Units No. 3 and 4 began generating power one year later.

In 2009, the company embarked on a five-year-long project to replace all of the original gas-insulated switchgear (GIS) equipment and extend the switchgear building to accommodate additional GIS equipment for the addition of two new turbine-generator units; another mega project scheduled to commence in 2012. The Mica 5&6 Project adds 1,000 MW of capacity to the Mica Generating Station; Unit 5 became operational in January 2015 and Unit 6 in December 2015. 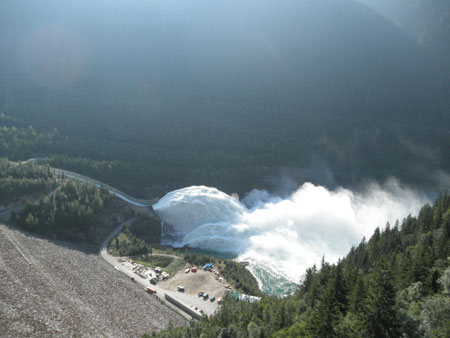 BC Hydro initiated replacement of the existing switchgear because of Sulphur Hexaflouride (SF6) leaks, insulation flashovers and failed disconnect switches that could no longer operate with their motor drives. SF6 is a greenhouse gas and the limited functionality of the disconnect switches imposed difficult operating restrictions on the facility, such as lack of remote operation capability.

Facilities constructed in the same era would have utilized an outdoor switchyard, but due to Mica Creek’s 620 cm (244 in) of average annual snowfall, underground powerhouse and transformers, Mica hydroelectric facility designers and engineers originally chose to use a GIS installation.

The GIS replacement project was broken into eight stages to facilitate the continual operation of the Mica Generating Station.

Site maintenance personnel had difficulty accessing the originally installed GIS in the switchgear building. Workers had to climb ladders to access catwalks to view, operate and maintain disconnects and bus sections. The new design from Mitsubishi brought the operating mechanisms of the disconnect switches, viewports and gas ports to ground level, which significantly improved safety for equipment operators.

BC Hydro developed a three-dimensional model based on the conceptual layout and design by Mitsubishi to ensure the new GIS components fit correctly in the existing building. The existing Areva circuit breakers were not replaced during the project and the design had to interface with this system as well.

Lead shafts No. 1 and 2 were already equipped with lift skip carts to shuttle workers between the switchgear building and transformer gallery. These carts were only useful for inspections and general maintenance and needed to be removed in order to replace the GIS bus. Mitsubishi designed a work cart for the removal and installation of the bus that could be used in all three lead shafts. The work cart is equipped with a hydraulic arm that holds and positions bus pieces for installation and removal, as well as traveling up and down the lead shaft rails.

The GIS bus departs the high-voltage bushing of the transformers and is connected to a series of surge arrestors, disconnect switches and ground disconnects. The configuration of the transformer gallery common bus was altered in the GIS upgrade design to allow for additional operational scenarios at Mica, such as power from the 500-MW generators can be directed up any lead shaft by opening or closing certain disconnects, which provides flexibility for operation and maintenance.

A mezzanine platform inside the transformer chamber was installed to support the bus, disconnect switches, local control cabinets and other equipment. The mezzanine floor also provides ease of access for inspections and maintenance. In addition, an overhead crane was installed to facilitate handling the equipment within the transformer gallery both during and after the GIS replacement project.

Personnel worked near live transformers within the confines of an underground transformer gallery. There is always some risk that a transformer can fail, possibly catastrophically, causing an explosion and fire.

A risk assessment for the work that evaluated potential hazards to workers provided recommendations that included:

Installation of many of the above safety recommendations was a significant construction task in its own right.

Fortunately for all of the stakeholders involved on the project, all of the recommendations were implemented in the transformer gallery prior to construction. BC Hydro contracted Jim Dent Construction Co. to install the smoke-resistant curtains, lead shaft blast plugs and a system that provided block wall protection meshing.

A requirement was that all workers entering the Mica transformer gallery be trained for several of the implemented safety measures, such as the fire escape hoods, evacuation chutes and mine arc refuge chamber. The on-site fire and rescue team played a key role in delivering training to workers and project team members that ehanced safety.

Originally, in a single six-month-long outage, the project would have involved replacing the GIS bus for Units No. 3 and 4, LS2 and 5L72.

As the outage date rapidly approached, on-site construction management staff realized the scope was not realistic, based on progress seen in Stage 1 and 2 (bus work for Units No. 5 and 6, and LS3) and extensive construction time to implement the safety recommendations. Even though delaying the outage, due to demobilizing the Mitsubishi crew, could potentially cost BC Hydro millions of dollars, company officials made the difficult decision to delay.

Project and construction management personnel, resident engineers and plant operations staff all gave significant effort to figure out a strategy to continue with construction without the planned outage on Units No. 3 and 4. This would allow Mitsubishi to remain on site and BC Hydro to avoid demobilization costs. Planners decided to request less disruptive transmission line outages and replace 5L72 and 5L71 bus sections in lieu of their originally planned sequence.

BC Hydro approved 5L72 and 5L71 transmission line outages, but substantial engineering would be required to make this approach viable.

One main issue is that initial construction drawings were all designed based on completing the transmission line bus work with the lead shaft and transformer gallery scope. Now the project would require reverse engineering to isolate work being advanced, in terms of interfaces between existing and new bus work, control systems for disconnect switches, and protection and alarming schemes.

The on-site construction team – which consisted of BC Hydro, Mitsubishi and West-Pac Electric – was able to complete two transmission line outages in August and November 2011. The construction schedule continued into a winter outage to replace the switchgear building ring bus.

Previously delayed Units No. 3 and 4 outages commenced in in March 2012 with a high degree of confidence in the scope of work and schedule. By postponing the outages in 2011 and re-sequencing construction, the modified GIS project milestone dates significantly reduced the risk of extending outages.

Timing unit outages to replace the 500-kV GIS bus in the transformer gallery was difficult because construction work required the facility to run two or fewer generating units for six months.

Mica Dam was constructed under the guidelines of the 1964 Columbia River Treaty between the U.S. and Canada, and its operation provides flood control for British Columbia and U.S. downstream communities. Mica Generating Station is also the cornerstone of BC Hydro’s Columbia generating system, and Mica flow regulation allows additional electricity generation at the 2,480 MW Revelstoke facility and other downstream power plants.

Combined, Mica and Revelstoke account for about 30% of the electricity generated by BC Hydro in an average year. Thus, it was a challenge to find a six-month window in which limited generation from Mica would not negatively affect BC Hydro’s economic and social status.

Construction for Stage 6 (Units No. 3 and 4 outages) was scheduled to begin March 2012, as system electricity demand usually decreases and Kinbasket Reservoir nears its lowest annual level. Typically, the Mica station generates less during the reservoir refill period and this pattern continues into summer months to ensure the reservoir has refilled sufficiently to meet Columbia River Treaty obligations and increasing fall/winter electricity demands.

Spring 2012 saw a delayed snowpack melt and record-breaking June rainfall amounts that led to increased water inflows into Kinbasket Reservoir. The reservoir was rapidly filling and GIS project-related outages resulted in fewer generators available to pass water flow. BC Hydro decided to release water through the Mica spillway during the remainder of the unit outages. Although a spill is a typical operation for a hydroelectric facility during high water conditions, spill events at Mica are very infrequent. In fact, apart from annual spillway testing, the last operational spill at Mica was in 1997.

The Mica project was safely completed within its $238 million budget between 2010 and 2014.