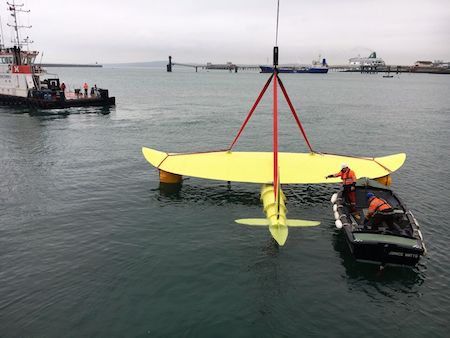 Minesto announced it was preparing the foundation for the unit in February, after which it installed a buoy used for analyzing power produced by the “Deep Green” — or DG500 — generator.

The Swedish company now says all the components and systems needed for power delivery “are now in place”, but did not project when production might actually begin.

Minesto already holds a lease agreement for a 10 MW installation at the site, but announced last Februrary it intends to scale it up to 80 MW.

Minesto has spent the past few years performing quarter-scale tests of its Deep Green generating units off the coast of Northern Ireland’s Strangford Lough while simultaneously working to launch the Holyhead Deep site.

Financing for the project and Minesto’s technology has come from a number of sources.

HydroWorld.com recently reported that Minesto had been awarded US$1.13 million by KIC InnoEnergy in June 2016, adding to a $3.84 million investment made in September 2015.

The group was also awarded a US$14.8 million investment from the European Regional Development Fund for Deep Green’s commercial rollout in May 2014, which helped lead to an order with Schottel Hydro to manufacture a prototype unit in April 2016.