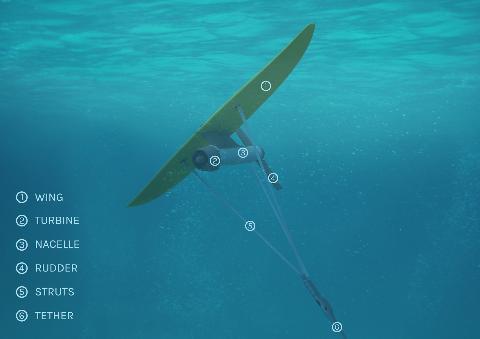 Per the agreement, Schottel Hydro is to develop components for Minesto‘s  “Deep Green” generating units, which are expected to be deployed at Holyhead Deep near Anglesey, Wales, in 2017.

The components include a “lightweight nacelle power-take-off system” with drive trains, power electrics and auxiliary devices “tailor-made” for the Deep Green system, the companies said in a statement.

“This is a strategic technology partnership with one of the world leaders in underwater technology, ensuring the quality and performance of our marine power plant,” Minesto CEO Anders Jansson said.

The drive trains are to be based on the Schottel Instream Turbine, which feature an inline arrangement of open rotor and rotor shaft. The advantages for Minesto, according to Schottel, are smaller rotor diameters and their ability to operate at higher RPMs.

Schottel Hydro is also to perform a series of full-load tests before installing the turbines.

“We are very pleased to announce this strategic partnership with one of the world leaders in underwater technology,” Jansson said. “This will not only ensure the overall quality of Deep Green, delivering a one-stop shop turbine solution which can be perfectly integrated in our system, but also optimize product development by supplying expertise to Minesto.”

Minesto describes the Deep Green system as an “underwater kite, comprised of a wing and a turbine which is secured to the seabed with a tether.” The unit then “moves with great speed in an 8-shaped path in the tidal or ocean current,” thus spinning the turbine and generating power.

The company was awarded a US$14.8 million investment from the European Regional Development Fund for Deep Green’s commercial rollout in May.

Minesto said the Holyhead Deep site will launch with a commercial-scale 0.5-MW power plant. The array will ultimately have a cumulative capacity of 10 MW.