A 14-month pre-feasibility study commissioned by African mining company Hummingbird Resources shows the potential hydroelectric power could have in powering both its Dugbe mine and southeastern Liberia.

The study, conducted by Knight Piesold and funded by IFC InfraVentures, examines five scenarios that would cost between US$51.5 million and $143.5 million, with output capacities ranging from 25 MW to 46 MW. 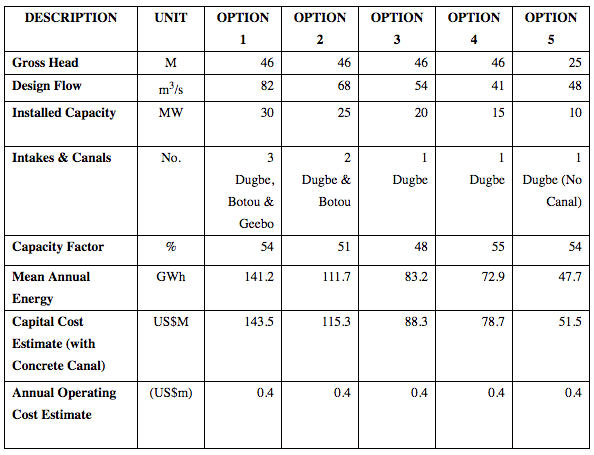 In February 2014, Knight Piesold conducted a desktop study regarding the development of a hydroelectric plant to supply future power to Dugbe once in production. A preliminary economic assessment of Dugbe was completed in April 2013 and demonstrated the viable economics of developing a 20-year gold mining project.

The hydropower plant would be primarily used to offset the cost of power usage at the Dugbe gold mine, which, according to Hummingbird Resources CEO Dan Betts, currently make up about a third of the facility’s operating expenses.

Betts said the company is paying about $0.28 per kW for rented diesel power now, though projections show a hydropower project could potentially lower the cost to $0.05 per kW, assuming the project’s capital costs were spread of the expected 20-year life of the mine.

Surplus power generated by the plant would be sold to the local region.

“We are obviously keen to move the project forward toward development, and the delivery of the hydro power pre-feasibility study is a tangible deliverable in this process,” Betts said.

The London-based company said it and its partners are now considering their next steps.