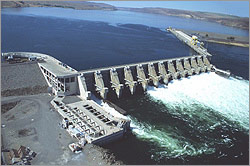 Modifications to the Wanapum and Rock Island Dam fish ladders appear to be successful, according to initial results reported by the Grant County Public Utilities District.

Modifications to the fish ladders was made necessary after Grant PUD discovered a crack in Wanapum Dam’s pier monolith No. 4 in February, prompting a drawdown of the waters behind the structure.

Biologists will also place passive integrated transponder (PIT) and acoustic tags on 250 adult spring chinook salmon from the hatchery program at Priest Rapids Dam before releasing them below Wanapum, allowing researchers to better confirm the effectiveness of the system.

“Both hydroelectric facilities have safely passed fish for more than 50 years and believe these early results are an indication of what will likely be another successful passage season,” Grant PUD said.

The utility said it has been working with representatives from the Confederated Tribes of the Colville Reservation, Yakima Nation, Confederated Tribes of the Umatilla, Wanapum Band of Priest Rapids, NOAA Fisheries, Washington Department of Fish and Wildlife, U.S. Fish and Wildlife Service, and Chelan Public Utility District to coordinate its fish passage program since the problem at Wanapum was identified.