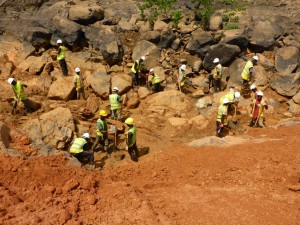 Completion of rehabilitation work at the 64-MW Mount Coffee hydro plant in Liberia has been delayed by a year due to the spread of the Ebola virus, according to Liberian President Ellen Johnson Sirleaf.

The cost to make the needed repairs and upgrades to bring the facility back on line is estimated at US$230 million. The government has received funding from various donors, including the European Investment Bank and European Central Bank, to help finance the work.

Sirleaf and other officials attended a groundbreaking ceremony for the rehabilitation in January 2014. At that time, Sirleaf said her goal was to see the first new turbine-generator units producing power in 2015, with the rest of the plant completed in 2016. In fact, it is reported the government later set the completion date for the Mount Coffee project at Dec. 25, 2015. However, the new goal is to have the plant completed by the end of 2016.

Work was suspended on the site, as reported by Sirleaf, in early August 2014. Multiple news sources have reported that Sirleaf said the Ebola epidemic, which has claimed thousands of lives in Liberia, stalled every project in the country, including the hydro project. In addition, major investors and contractors departed the country.

As part of her new estimate, Sirleaf is reported to have assured that a 38-MW power plant will be operational, much lower than the initial capacity estimate of 80 MW from four 20-MW units.

The Liberia Electricity Corporation, the national electricity company of Liberia, is managing the Mount Coffee Hydropower Plant Rehabilitation. According to the website for this work, electricity supply in the country is problematic because the main grid supplying the capital of Monrovia, as well as all rural systems, were largely destroyed. Before the war, total installed electricity generation capacity in the country was about 412 MW. As of 2013, LEC had installed capacity of 22.6 MW.