By traveling rim hugging trail ways, visitors to the Grand Canyon have the opportunity to view the effect massive amounts of water have had on the formation of one of the natural wonders of the world.

One way to view the results from millions of years of erosion in Grand Canyon is by taking a trip, via mule, from the top of the canyon’s South Rim. Riders will descend down Bright Angel Trail for approximately 5.5 hours during a 10.5-mile journey. 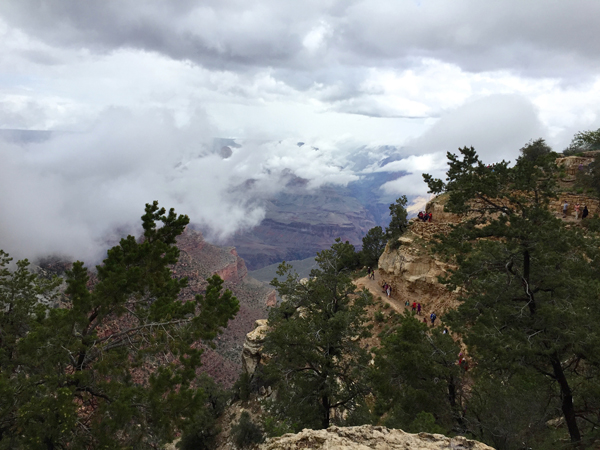 First of all, even though travelers must book their trip 13 months in advance to take the Bright Angel Trail Mule Ride, of these people, how many have ever spent more than 5 minutes riding a mule? Secondly, of all the people on the planet who have ridden a mule; how many have done so riding down the wall of a canyon?

Lastly in this narrowest of groupings, of all the people who have ridden a mule, ridden a mule down Grand Canyon from the South Rim; how many of these riders have done so while the canyon is completely shrouded in fog?

The trails, some naturally formed and others partially manmade, grant access to what the U.S. National Park Service says is, “Unique combinations of geologic color and erosional forms that decorate a canyon 277 river-miles-long, up to 18 miles wide and one mile deep.”

As you focus on “1 mile deep,” realize when my wife and I visited Grand Canyon earlier this month we shared this fleeting thought as we went to sleep: “It would be a wonderful adventure to ride a mule to the canyon floor.”

Both of us began our day the following morning at 6 a.m. and went to watch the 8 a.m. departure of the mule-riders down the canyon trail from their point near Bright Angel Lodge.

Well, I am thinking, “Holy schnikies!”

First, it was so foggy outside that visibility was less than 50 yards along the canyon wall and in addition to low-visibility, there was light rain falling on the novice mule-riders. In the mix, one of the full-time mule wranglers uttered over his radio, “Watch that lady riding Snoopy, like a hawk!”

Um first, one could not see the line of riders from the beginning to end. And even if you could see all of the riders, no way in heck could anyone get back to help a rider depending on what point on a trail the need became known.

It was at that point I said to myself, “Ain’t no freaking way I would ever ride a mule on a trail to the canyon floor. And, I dang sure am not going to do it while it’s foggy!”

So many things went through my mind about possible mishaps, and all of the scenarios included the need for Depends and ended in rider fatality.

But alas, how wrong was I? Very.

It turns out; no rider has been killed as a result of a mishap during guided tours for mule-riders. As a matter of fact, of the fatalities in Grand Canyon most result from plane crashes or drowning in the Colorado River.

Since they began in the late 1800s, more than 600,000 people have taken the tours and according to the U.S. National Park Service, only one canyon guest suffered serious injury when the mule she was riding lost its footing and rolled over her. There have been very few mule-rider injuries.

Reviews posted online from people who say they have taken the Bright Angel Trail Mule Ride are decidedly positive and relay triumph at their interpersonal canyon challenge.

But even though I was really, really wrong in thinking lots of folks perish off the side of the canyon wall while riding a mule, I hold to what one poster wrote: “I was so scared the entire time I was riding that I would not wish this mule ride on my worst enemy.”