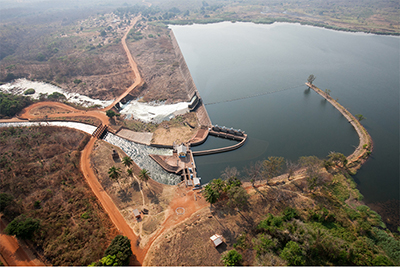 Three of six turbine-generators being modernized at the Mwadingusha hydropower plant in Central Africa’s Democratic Republic of Congo have increased the plant’s capacity from 11 MW to 32 MW.

Mwadingusha’s remaining three generators are due to be upgraded and fully operational by the end of 2019. The plant’s completed rehabilitation and modernization program is expected to bring the plant back to 71 MW, its nameplate capacity when commissioned in 1930.

According to mine officials, Switzerland-based engineering firm Stucky Ltd. is overseeing the work at Mwadingusha under the direction of Ivanhoe Mines and its joint-venture partner, Zijin Mining Group. The entire project is in conjunction with DRC’s state-owned power company, La Société Nationale d’Electricité (SNEL).

In September 2016, HydroWorld.com reported power supply for the copper mine is being provided by SNEL under a financing agreement made in March 2014.

The power SNEL is supplying is part of a plan that includes future generation from the 36-MW Koni and 10-MW Nzilo 1 hydroelectric power plants. These two plants will be rehabilitated once work at Mwadingusha is completed.

Ivanhoe Mines Executive Chairman Robert Friedland said, “The upgrading program is a significant public—private partnership, which is vital to secure sustainable, clean electricity for the Congolese people and for the development of a Tier 1 copper mine at Kamoa-Kakula.”

The Mwadingusha and Koni plants are in cascade, with Koni directly downstream from Mwadingusha on the Lufira River at the mouth of Lake Tshangalele, north of Likasi and about 250 km northeast of the Kamoa Mine development site.

The Nzilo 1 plant is on the Lualaba River, downstream of Nzilo Lake and north of the city of Kolwezi, 40 km from Kamoa.

Once fully rehabilitated and modernized, SNEL said the plants will have a total installed capacity of about 200 MW, which it says is expected to be more than sufficient for the Kamoa-Kakula Copper Project.