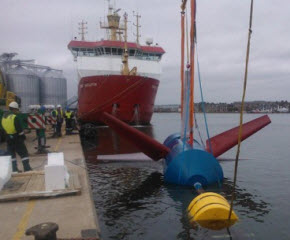 Tidal energy developer Nautricity has received approval from Marine Scotland to deploy a turbine device in the Mull of Kintyre off the coast of Scotland’s western Argyll region.

Nautricity said it is just the fourth company to be granted full permission to deploy tidal devides in Scottis waters, having previously received consent from the Crown Estate and SSE.

The project will use Nautricity’s Contra Rotating Marine Turbine (CoRMaT), which was developed using funding from Scotland’s WATERS2 package, which was intended to help Scottish businesses gain traction in the international marine and hydrokinetics (MHK) market.

Work on the project will begin pending construction of an onshore sub-station that will connect the array to Scotland’s grid. Nautricity said the Argyll and Bute councils have approved the transmission line, however, allowing for the planned deployment of a CoRMat unit in early 2015.

The Glasgow-based company said it plans on using the experience it gains from evaluating a unit in Scotland’s European Marine Energy Centre (EMEC), which was deployed earlier this month.

“We are delighted to be in at the very start of commercial tidal energy generation in the U.K.,” Nautricity founder and CEO Cameron Johnston said. “Receiving full consent for this project is a great vote of confidence in our technology and our site development capabilities.”