The traditional linear method of calibrating Winter-Kennedy piezometers is known to have inaccuracies, particularly at the extremes. This article describes an improved form of the calibration equation that increases accuracy. This method can be used with as few as three data points. However, as with any calibration, including the traditional linear one, accuracy is increased as the number of data points increases.

In 1933, Ireal A. Winter and Mr. Kennedy published a paper, “An Improved Type of Flow Meter for Hydraulic Turbines,” describing what we refer to today as the Winter-Kennedy piezometer system to measure relative flow rates in hydraulic turbines. This system consists of at least one pair of piezometers in the curved portion of a spiral or semi-spiral case. These piezometers are located on the inside and outside of the case, usually 30 degrees or 45 degrees after the curve begins, and are on the same radial plane from the center of mechanical rotation. The relative elevations of the piezometer orifices do not affect their function.

It is standard practice for the U.S. Army Corps of Engineers to put two or three orifice taps on the inside and one on the outside of the case. One inner tap is in the upper flange of the stay ring, and the other one or two are at slightly increased radial distances from the center of rotation. This is done so that the inner and outer pair with the least hydraulic noise can be selected.

These piezometers act in a manner similar to “elbow taps.” As the flow enters a curvilinear path of a spiral case or the bend of a pipe, it develops an angular momentum, which is a function of the square of the velocity and the radial distance from the center of rotation. As the radial distance increases, so does the angular momentum. This is analogous to the flow in an open channel going around a bend, where the flow on the outside has a tendency to “ride up” on the outside wall. Each piezometer is also influenced by the velocity head of the fluid at the tap, which also is a function of the square of the velocity. Therefore, the two piezometers measure a different piezometric pressure, and the difference is nominally a function of the square of the velocity. Conversely, due to the Law of Continuity, the square root of this piezometric difference is then nominally proportional to the flow rate.

Because these piezometers measure a difference in angular momentum, they are actually measuring a relative weight flow rate of the fluid. Consequently, the greater the fluid’s specific weight, the greater the pressure differential. If electronic pressure differential measuring devices are used, they should be calibrated using water of the same specific weight as that in the spiral or semi-spiral case. If water manometers are used, they should be bled periodically to keep the water in the piezometer lines at the same temperature and specific weight as that in the case.

The Winter-Kennedy piezometer system is a relative flow measurement method. It may be used to determine relative efficiencies directly, as in an index test. This is often done by forming a relative efficiency value, at constant head, of generator output divided by the square root of the piezometric differential:

There are two traditional methods of calibrating Winter-Kennedy piezometers, depending on the number of points available. The single-point method is used when an independent method is not available to measure absolute flows during a test. It relies on knowing the absolute flow at a single point. Commonly, the prototype flow value from a model test at the point of peak efficiency is equated to the square root of the piezometric differential at peak relative efficiency. Then, the calibration constant “k” may be solved for:

– Q is flow in cubic feet per second.

Because k is the unknown in the single-point method, the exponent must be assumed to be an exact square root, 0.5.

On most turbines, the exponent is known to vary slightly from the exact square root. The ASME Test Code1 states that for flow in the spiral or semi-spiral case, “The extreme values of the exponents which may be expected are 0.48 to 0.52.”

A second method is used when a series of independent absolute flow values have been measured, simultaneously with measurements of the Winter-Kennedy pressure differentials. It is standard practice to plot these on a log-log graph, with the y-axis as log10Q and the x-axis as log10D. (Use of the base of 10 rather than a base of e is a personal preference.) Then, forming a straight line equation of the form y = mx + b, a best fit or least squares fit is used to derive values for “m” and “b” in the logarithmic equation of log10Q = m(log10D) + b, where m is the slope and b is the y-intercept. From a logarithmic identity of exponents, we arrive at log10Q = log10Dm + b. Then, raising both sides of the equation as an exponent to the number 10, we arrive at 10logQ = 10logD^m + b = 10b10logD^m. Again, another logarithmic identity is that 10 to the log anything is anything. Therefore, we arrive at:

In December 2004, turbine performance tests were conducted on Unit 4 at the 810-MW Lower Granite project on the Snake River in Washington, which is owned by the Corps. Two pairs of Winter-Kennedy piezometers were measured. The inner piezometer (in the stay ring) coupled with the outer piezometer is referred to as the high deflection tap set. The other inner piezometer, at a greater radial distance from the center of rotation, coupled with the outer piezometer is referred to as the low deflection tap set. In addition, absolute flows were measured by the acoustic scintillation (performed by ASL AQFlow) and acoustic time-of-flight (performed by Accusonics) methods. The performance measurements were made both without fish screens and with extended submerged bar screens in the intake’s three bays. To avoid redundancy, in this article only the tests without screens will be presented.

The first data plotted was a comparison of the high and low deflection Winter-Kennedy piezometers (see Figure 1 on page 37). This shows a good linear correlation, with a correlation coefficient of 0.99632. However, instead of passing through the origin, the intercept is 0.49. This means that when the low deflection tap set measures zero, the high deflection set would still be measuring almost a 0.5 foot differential. This is an example of the inaccuracy of a traditional Winter-Kennedy system calibration at its extremes. Closer examination of the plotted data shows the correlation has a definite curvature, indicating a second order or quadratic equation would provide a better correlation. Figure 1 on page 37 also shows that a quadratic equation does give an improved correlation coefficient of 0.99868, with the intercept reduced to -0.24. The only way this second order relation could exist is if one or both pairs of Winter-Kennedy system piezometers have a second order correlation with flow, rather than a linear one. 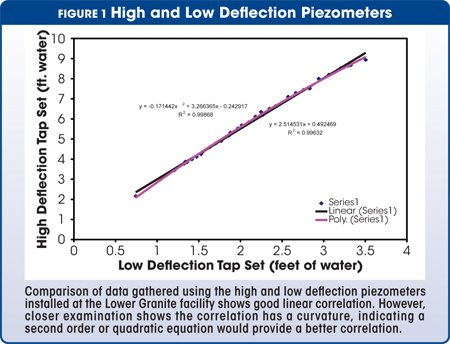 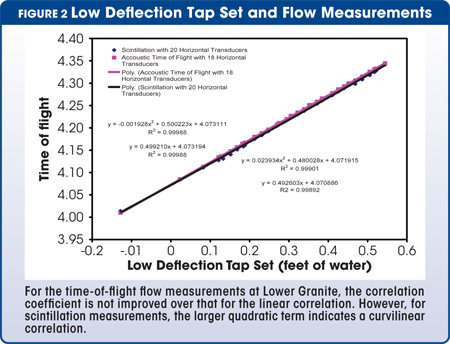 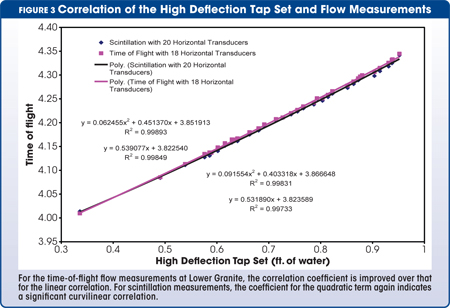 By logarithmic identity of exponents, treating a(log10D) as a coefficient of the second log10D, and discontinuing to write the base number 10, this is equal to:

Again, raising both sides of the equation as an exponent of the number 10 leads to 10logQ = 10logD^(alogD) + logD^m + b = 10logD^(alogD)(10logD^m)10b. Then, again by the identity that 10 to the log anything is anything, we arrive at Q = 10b(Da(logD))Dm. Then, because the exponents of multiplied bases are additive, we arrive at Q = 10b(Dm+a(logD)). This may finally be written in the more common form of:

Two things are noted in this new Winter-Kennedy calibration equation. The first is that the coefficient is constant, but it is the exponent that varies. Because “a” may be either positive or negative, the exponent can increase or decrease with increasing flow. Secondly, if there is no curvature in the plotted calibration data, such that the coefficient of a is zero, the equation simply reverts to the traditional linear form of Q = kDm.

Comparison between the two calibration equations

The improvement this new quadratic form provides in a calibration equation is evaluated by applying it to the calibration data from Lower Granite Unit 4. Table 1 shows the results. 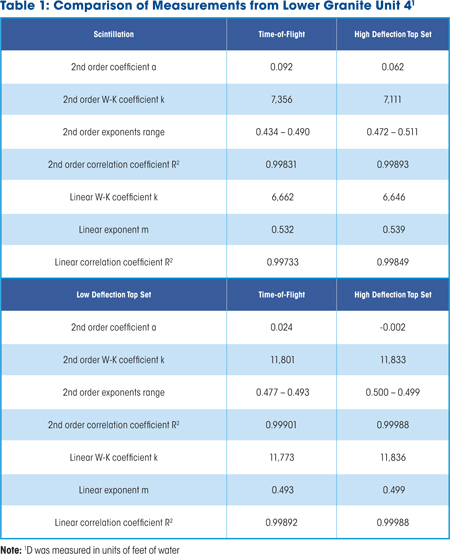 It is clear that this new second order calibration equation can provide a better fit when a series of Winter-Kennedy calibration data is available. However, the prevailing theory for almost the past century has been that as long as the inside and outside taps are on the same radial plane from the center of rotation, the calibration equation should be the piezometric differential raised to a single exponent, equal to or near a square root. It may be expected that the piezometer taps are installed on a radial plane from the center of mechanical rotation, i.e. the shaft centerline.

However, the actual theory of fluid mechanics is that the taps should be on the same radial plane from the center of fluid rotation. Therefore, the possible explanation is that the center of mechanical rotation is not coincident with the center of fluid rotation. Considering that spiral cases have an ever-reduced cross-sectional area around their periphery and are therefore not symmetrical around the center of mechanical rotation, this seems entirely plausible. Subsequently, it has been found that in their original paper, Winter and Kennedy specifically pointed out that they necessarily had to assume the two centers were coincident.

It is concluded that the correlation of a series of flow measurement calibration points versus the piezometric differential of the Winter-Kennedy piezometer system often exhibits a slightly nonlinear, second order effect when plotted on a log-log graph. This has led to the derivation of a new, more accurate calibration equation of Q = kDm + a(logD), where m is the traditional exponent, near a square root, and a is the coefficient of the second order term from the calibration equation of Q = a(log2D) + m(logD) + b. The resulting nonlinear effect of this new form of the calibration equation is due to the fact that although the coefficient k is constant, the exponent of the piezometric differential D varies with the magnitude of the flow rate. This variation may be for the exponent to increase or decrease with increasing flow, depending on the algebraic sign of a.