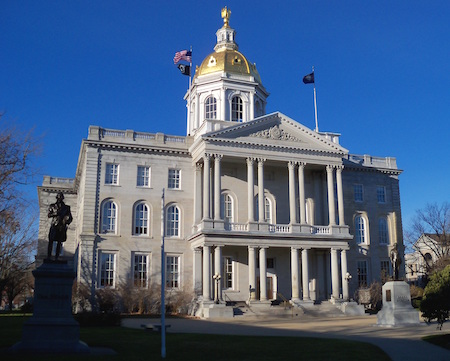 A plan to import 1,090 MW of Canadian hydroelectric power into the New England region have hit a significant roadblock following the proposal’s unanimous rejection by the New Hampshire Site Evaluation Committee.

The line had already cleared a number of state and federal approvals, making its construction almost a foregone conclusion after the Northern Pass was selected as winner of the Massachusetts Clean Energy Request for Proposals last week.

The key remaining approval was to have come from the New Hampshire Site Evaluation Committee, which stymied the project with a 7-0 vote against, citing impacts to the state’s tourism industry and business.

Northern Pass opponents have long argued the transmission line, with towers up to 160 feet in height, might damage the region’s scenic value — particularly in The White Mountain National Forest.

However, the plan was issued a special permit by the U.S. Forest Service allowing for the burial of transmission line in White Mountain in January, and a November report from the U.S. Department of Energy issued a record of decision by endorsing a presidential permit.

The developers claim more than 80% of the transmission line’s total length would follow existing right of ways or be buried, minimizing its visibility.

What happens next
Eversource officials have told local media outlets that the company was “shocked and outraged” by the New Hampshire decision, arguing that it does not comply with the state’s law nor “reflect the substantial evidence on the record.”

The company has said it will appeal the Site Evaluation Committee’s ruling, but did not hint as to when that process might begin.

“Clearly, the SEC process is broken and this decision sends a chilling message to any energy project contemplating development in the Granite State,” the company said in a release.

The surprise is not limited to Massachusetts, however, with New Hampshire Gov. Chris Sununu seemingly blindsided by the SEC’s vote as well.

“I’m frankly stunned and disappointed by both the timing and outcome of today’s decisions,” Sununu said “To deny 1,100 MW of clean, renewable energy and more than 1,000 jobs for New Hampshire is a mistake.”