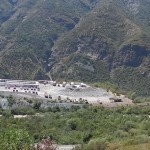 This run-of-river facility was built on the Las Damas River in Fernando district, Colchagua province and provides electricity to Chile’s central SIC grid.

Total investment in the plant was US$135 million, and BNAmericas reports the project employed 555 people during its construction phase and will employ 20 workers when operating.

HydroChile acquired the water rights for this project in December 2007 and originally proposed to develop a 40-MW project.

Other hydro projects this company is involved in developing include 40-MW San Andres, and the company is developing a 170-MW pipeline of run-of-river projects in the country.

Zublin International GmbH Chile reported in May 2013 that it had been awarded the contract for construction of water tunnels and associated underground works for the El Paso project.