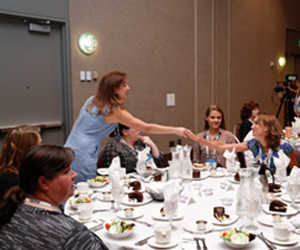 PennWell’s Hydro Group is pleased to announce the fourth class of recipients for its Women with Hydro Vision award.

The Women with HydroVision awards program was designed to honor the most influential women in hydropower for their accomplishments and contributions to the industry.

This year’s honorees include:

Terry Flores, Executive Director, Northwest RiverPartners. Terry’s career in hydropower spans more than three decades, with particular focuses on relicensing, education and promoting the value of hydroelectricity to both the public and policymakers. During her time as executive director for Northwest RiverPartners, Terry spearheaded the award-winning CleanHydro campaign in 2013. Throughout its three-year run, CleanHydro produced a number of television spots, educational programing and media coverage in the Pacific Northwest.

Cheryl Laatsch, Federal Energy Regulatory Commission Coordinator, Wisconsin Department of Natural Resources. Though a relative newcomer in the hydropower industry, Cheryl has worked diligently to build relationships with the owners, operators and consumers of Wisconsin through transparency, honesty and open communication. She is a strong advocate of the “one Wisconsin DNR” approach, which has shown improved efficiency and helped clarify licensing issues.

Nancy J. Skancke, Owner, NJS Law, PLC. Nancy has been a force in the hydro sector for nearly 40 years, providing utilities with legal guidance and filling a number of roles for the National Hydropower Association. Nancy has served on NHA’s Regulatory Affairs Committee, Board of Directors and also acted as treasurer, in addition to helping implement NHA’s regional meeting program, Small Hydro Council task force and Finance Summit. The organization recognized her with its Herculean Award in 2006 for her contributions.

The awards will be presented during the annual Women with Hydro Vision luncheon, which takes place in conjunction with the HydroVision International 2017 conference and exhibition. The luncheon begins Wednesday, June 28 at 11:45 am in the Colorado Convention Center. To learn more about this event, or to register to attend, visit HydroEvent.com.