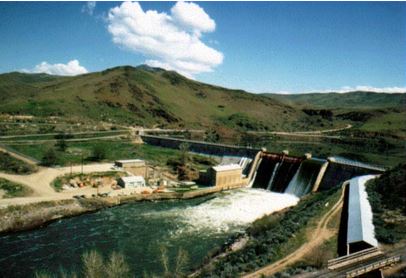 The Bureau of Reclamation’s plans to add a third generating unit at its Black Canyon Diversion Dam have been placed on hold after a business case analysis showed construction costs are greater than the benefits of additional power generation.

David Denton, project manager with Reclamation, says the project should be placed on hold until energy prices rebound. Reclamation was planning to add a 12.5-MW unit in a new powerplant, with the electricity generated integrated into the grid. This unit was intended to take advantage of water that is being discharged via the spillway and provide operational flexibility when one of the two original units is shut down for maintenance.

In 2016, Reclamation anticipated this unit would generate an additional $3.56 million in revenue annually. A 2013 report indicated Reclamation expected the project to cost about $53 million.

Black Canyon Diversion Dam was constructed in 1924 on the Payette River in Idaho, U.S., as part of the Payette Division of the Boise Project. It is a concrete gravity type dam with an ogee overflow spillway. It has a structural height of 183 feet. The dam provides water for irrigation, hydropower and recreation.

The two-unit, run-of-river powerplant had an initial capacity of 8 MW. Its electrical components were upgraded to 10.2 total MW in 1995.

Although the generation expansion is off, Reclamation will still move forward with the design and relocation of a new power switchyard and upgrades to control systems at the dam.

In June 2016, HydroWorld reported that a final environmental assessment and Finding of No Significant Impact pointed toward this project proceeding.