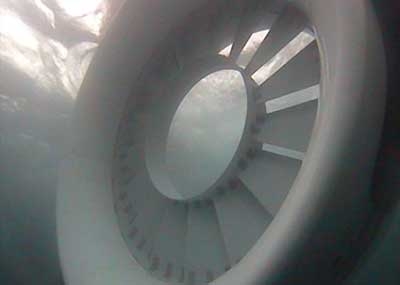 Marine energy developer OpenHydro has successfully deployed the first of two tidal turbines at the Paimpol-Brehat demonstration farm in France.

“After a series of successful tests evaluating mechanical and electrical performance, the 16-meter-diameter turbine was towed out to sea on Wednesday and deployed by the OpenHydro barge,” chief executive James Ivest said.

The Irish company was selected to install the turbines at the Paimpol-Brehat site by French utility EDF in June 2014 to test their long-term reliability.

Each of the turbines will be connected to a common subsea converter that will transform the current to high-voltage direct current with an electrical capacity of 1 MW. The power will then be transmitted to shore via a 16-km-long subsea cable that will eventually feed in to the power grid.

HtydroWorld.com reported last May that EDF had awarded a contract to GE Power Conversion to supply the site’s electrical conversion system.

According to EDF, France alone holds 20% of Europe’s marine energy generation potential. In fact, EDF estimates the workable European marine capacity to be about 12.5 GW. The company is focusing on this project, which has been under way since 2008, to help supplement its existing generation assets.