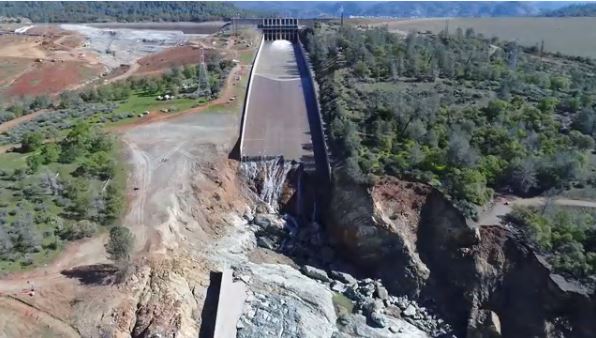 The California Department of Water Resources is in the midst of work to reduce the level of water in Lake Oroville behind Oroville Dam to provide sufficient storage for additional rain or snowmelt.

California DWR resumed operation of the flood control spillway at Oroville Dam on Friday, March 17, and outflows from the spillway are about 40,000 cubic feet per second, in addition to flows from the 645-MW Hyatt Powerplant of about 6,750 cfs. Based on these outflows, the lake level is dropping about 4 feet per day. California DWR says outflows and river levels are expected to remain steady for about one week before being reduced.

The Hyatt plant was restarted on Friday, March 17.

As of March 20, about 1.25 million cubic yards of material had been removed from the debris pile.

On March 16, California DWR reported that natural-occurring asbestos was discovered in limited areas near the construction zone, during air quality and sediment testing. DWR has submitted a dust-control plan to the Butte County Air Quality Management District to protect workers and nearby residents, while also saying “the risk to workers and the surrounding community is minimal.”

The Mercury News reported on March 20 that the cost associated with “the ongoing crisis” at Oroville Dam totaled about $100 million through the end of February. The website cited Bill Croyle, acting director of California DWR, as indicating the average daily cost at the dam in February was about $4.7 million. Croyle said cost to repair or replace the main spillway “are likely to be ‘much higher’ than early estimates of $100 million to $200 million.”

For more information on Oroville Dam or other dam safety issues, click here.