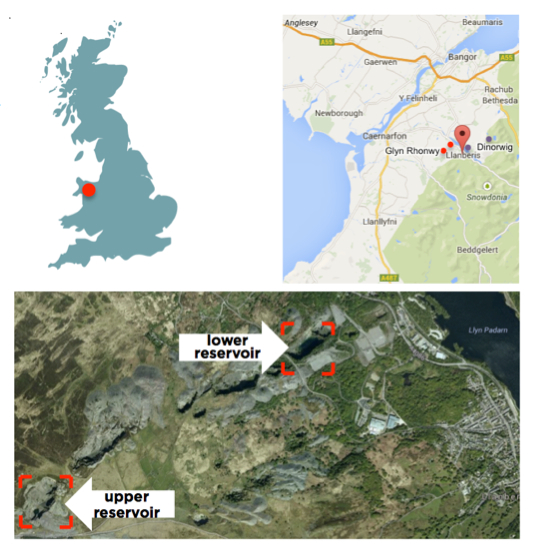 Internal stakeholders for the US$155.5 million Glyn Rhonwy pumped-storage hydroelectric plant have sent a revised request to the UK Planning Inspectorate to increase output of the powerhouse by 50 MW.

In 2013, local stakeholders in Snowdonia, Wales, approved a construction request for the plant, with a capacity of 49.9 MW at that time.

Under Welsh planning law, the proper authorities within local municipalities can approve installations with a capacity of less than 50 MW. But to increase the planned capacity for the Glyn Rhonwy plant, the UK Planning Inspectorate must accept the revised plan because it grants approval for schemes with a capacity at or above 50 MW.

If approved, Glyn Rhonwy would have a capacity of 99.9 MW.

The proposed change in output, according to published reports, involves installing larger turbines and associated equipment underground but does not contain changes to any other facility infrastructure.

Quarry Battery Co. (QBC), responsible for the facility’s construction and operation, created Snowdonia Pumped Hydro (SPH) to run the electricity storage facility. Under the 2013 agreement, construction work at Glyn Rhonwy is scheduled to begin in 2015, but the amended plan going forward is largely dependent on the decision from the UK Planning Inspectorate.

The request to increase power output came after QBC officials held talks with UK government officials from the Department of Energy and Climate Change and other construction partners.

According to QBC, “Britain’s energy needs have evolved since the scheme was designed. The government has included [pumped-storage] within its 2014 Electricity Market Reform Act with the aim of helping to ensure that Britain does not suffer blackouts.”

SPH said the footprint of the scheme has increased to allow flexibility in the construction process but the size of all the above ground elements of the scheme will not change.

“I can’t say this any more clearly; ‘Nothing above ground would change,’” said SPH Managing Director Dave Holmes.

·         Plant house in the industrial park would remain the same size

SPH said raising facility capacity to 99.9 MW might likely generate rate payments to local stakeholders estimated at US$941,100 each year. In addition, the company said it has pledged to establish an independent trust to manage contributions made from Glyn Rhonwy to the community, including an initial US$509,800 grant and about US$23,500 in annual payments.