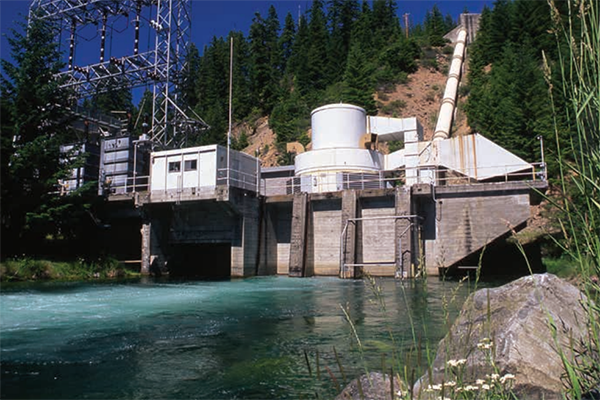 The 31.99-MW Lemolo 1 hydroelectric project, which includes Lemolo 1 Dam that impounds North Umpqua River creating Lemolo Reservoir (Lemolo Lake), is located in south-central Oregon on the west side of the Cascade Mountain range in Douglas County. The dam is being inspected this week by divers who will descend 90 ft underwater to inspect the dam’s concrete face, towers and structures as required by the Federal Energy Regulatory Commission.

“The dam and flow controls are routinely inspected, though this inspection has a more in-depth focus on the conditions of the concrete,” said Rich Grost, PacifiCorp principal aquatic scientist. “This is the most detailed inspection we have done at Lemolo Dam for concrete.”

The group requirement for inspections includes eight projects constructed to generate electricity between 1947 and 1956.

“We’re doing this in preparation for a five-year independent consultant dam safety inspection, which is going to occur in 2017 and 2018 as part of a group requirement,” said Mark Reeves, PacifiCorp dam safety engineer.

Inspectors are checking Lemolo 1 Dam for structural deterioration, corrosion, condition of concrete construction joints and connections to gate rails and the trash rack. 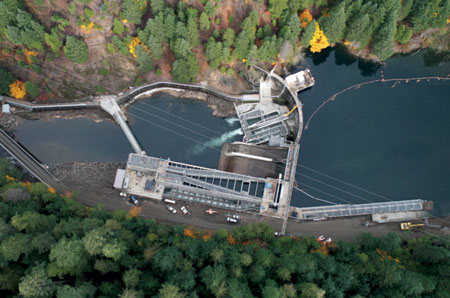 This aerial view of the Soda Springs hydropower plant shows improvements completed in 2012 that added fish passage for a section of Oregon’s North Umpqua River.

The project contains eight of the 47 hydroelectric developments PacifiCorp owns and includes the following:

The seventh and largest of eight dams built for the 194-MW North Umpqua hydroelectric project, according to to PacifiCorp, Lemolo 1 Dam was built in 1954 and opened in 1955.

Lemolo Lake is a 419-acre reservoir that has a total storage capacity of 11,752 acre-feet.  About 16,310 feet of gunite-lined and concrete canal and flumes extend from Lemolo Dam to the concrete penstock intake and forebay, which has a trashrack and a 15.9-foot-wide Tainter gate. The steel penstock is 7,338-feet-long and has a diameter ranging from 9.7 to seven feet at the powerhouse.

The powerhouse is located on the North Umpqua River at the mouth of Warm Springs Creek, 4.5 miles downstream of the dam at Lemolo Lake. The reinforced concrete powerhouse contains a single vertical shaft Francis turbine-generator.

Storage in Lemolo Lake is used to control floods, increase power generation when demand is high in late fall, and augment flows in the river downstream of the eight projects.