With more hydropower plants being required to operate flexibly, there is concern regarding effects on the equipment. EPRI shares findings from a recent whitepaper on the adverse effects of flexible operations.

For more than 20 years, a variety of influences have combined to require power plants, including hydroelectric units in North America and worldwide, to operate with increasing flexibility.

In recent years, the Electric Power Research Institute (EPRI) has conducted research on the challenges of increased operating flexibility for plants across the electric power industry, including studies of the technical issues associated with this trend and the best practices and new technologies to mitigate damage and increase flexibility. A key part of this research has focused on the flexible operation of hydropower plants.

A number of factors have created the need for more flexible hydropower systems. Initially, the primary drivers were the rise of electricity markets and the emergence of new products and ancillary services (regulation and frequency response, reactive supply and voltage control, spinning reserve, and supplemental reserve).

Another factor has been the role of hydro units in providing support for fossil and nuclear generating units within non-market power systems with a mix of generators, such as Duke Energy and the Tennessee Valley Authority. New license conditions, environmental operations, and updated optimization and control systems can also change or limit the flexible operation of hydro facilities.

A key driver for increases in flexible power system operation is the rapid and widespread rise in variable energy resources, primarily wind and solar generation, as a result of federal production tax credits, state renewable portfolio standards and state greenhouse gas reduction goals. Figure 1 summarizes some of the factors that affect the flexible operation of hydro plants. 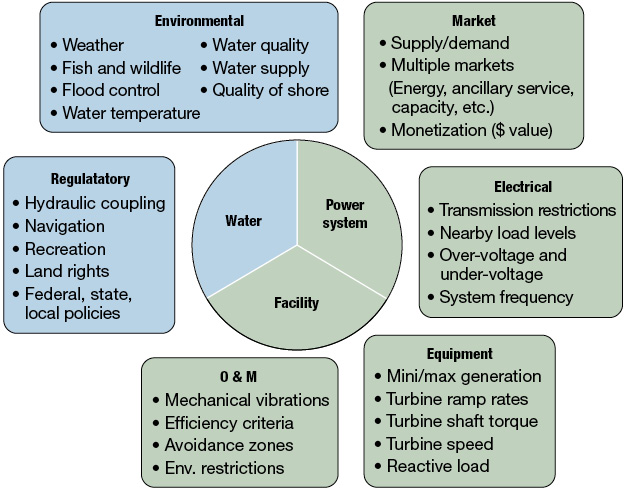 The operational factors that affect the flexible operation of hydro plants are categorized by association with water, the overall facility and the power system.

For each of these plant areas, the consequences were summarized for six operating zones or transient events, including: start/stop, speed-no-load, low load and intermediate load, near-best efficiency (traditional baseload operation), high load, and load rejection.

A few examples of the likely consequences of these operational modes are: 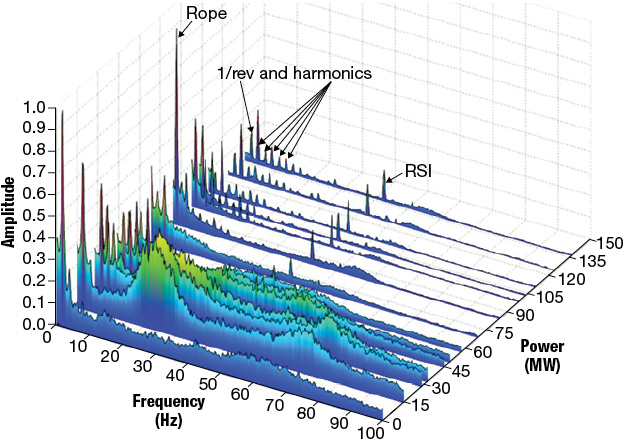 These strain gauge amplitude spectrum test results show the broad spectrum of loading on a turbine produced by operation in the speed-no-load, lower load, and intermediate load operating zones.

Ameren Missouri’s eight-unit, 240-MW Osage Hydroelectric Project is located on the Osage River near Lake Ozark, Mo. Because of concerns about downstream water quality, Osage Units 1 through 8 were upgraded in 2002 with aerating turbines using central aeration. In 2008, several units were upgraded with aerating turbines using distributed aeration. These installations resulted in less flexible operation for the plant.

After the Midwest Independent Transmission System Operator (MISO) introduced regional energy markets in 2005, generation from Osage was traded in the MISO market. In January 2009, MISO introduced an ancillary services market. Detailed analyses of Osage’s operation were conducted using unit load data at one-minute time intervals to evaluate the overall plant efficiencies operating in the new market environment. Performance results under the MISO ancillary services market fell short of the optimized performance by an average of 3%, primarily as a result of the practical necessity of maintaining additional units on-line at lower loads to meet anticipated system demand and to avoid excessive unit cycling.

To achieve the requirements set out by Reclamation, the equipment manufacturer redesigned the wicket gate and stay vane hydraulic profile and utilized an extended runner band. The extended runner band was particularly important for controlling cavitation over the wide operating range. CFD modeling and finite element models were implemented for stress and fatigue analyses.

By perfecting the blade profile design, engineers were able to increase efficiency, flatten the efficiency curve, and reduce pressure fluctuations from draft tube vortices. The new unit began commercial operation in May 2012.

Extended operation for integration of solar and wind energy

OPG’s hydropower assets have traditionally been used to generate baseload power. When OPG stopped burning coal in its thermal plants in 2014 to reduce CO2 emissions, nuclear power became a much larger component of the utility’s baseload generating capacity, and hydropower’s traditional role began to change.

The Pine Portage station has shifted from predominantly baseload to load-following or part-load operation because of increased generation from wind and solar sources and because of decreased industrial demand for electricity in Northwest Ontario after the 2008 recession. As a result, Pine Portage has significantly increased the flexibility of its operation, including a wider operational range, more starts and stops, and increased diversion, or spilling, of water through the sluice gates during times of low demand for electricity.

OPG and EPRI developed a pilot project to focus on the changing mission profile for the Pine Portage generating station. The process uses a technical workshop to identify, discuss, and prioritize key technical issues and to define uncertainties, gaps in knowledge and understanding, and potential solutions. Components of particular concern were the turbine runners, shafts, head covers, bearings and generator components.

Recommendations for additional EPRI research on this topic include: