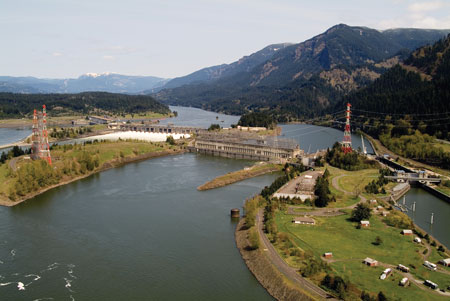 Recent Work in Fish Passage Many utilities in the U.S. are performing work on fish passage. This article elaborates on some of the work being performed, lessons learned to date and future research directions.

Moving fish past dams, particularly those that impound water for hydroelectric powerhouses, is vital to maintaining ecosystem health and adequate fish populations. Much work has gone into ensuring adequate, effective fish passage, both in terms of research and actual implementation of fish passage at dams.

This article provides information on recent work with regard to fish passage from several different perspectives.

The awards were given as part of a prize competition. Reclamation collaborated with U.S. Geological Survey, NOAA – National Marine Fisheries Service, the U.S. Fish and Wildlife Service and U.S. Army Corps of Engineers to design and judge the competition.

The federal government receives a perpetual, no-cost right to use any of the ideas submitted, and Reclamation is developing a plan to further test, develop and demonstrate the effectiveness of the ideas submitted. The top winner, who received $10,000, involved using a drag conveyor to pass fish downstream. The system may offer continuous and rapid transport and may manage pressure within the chambers, minimizing the trauma to the fish.

Other research Reclamation is conducting includes development of an environmental impact statement for the Shasta Dam fish passage evaluation project, which evaluates the near-term actions of reintroducing federally listed endangered winter-run chinook salmon and potentially spring-run chinook salmon to tributaries above Shasta Dam. The near-term goal is to increase the geographic distribution and abundance of the fish and the long-term goal is to increase abundance, productivity, and spatial distribution, as well as improve the life history, health and genetic diversity of the species.

Reclamation released a draft pilot implementation plan for this dam, which impounds water for a 663-MW hydro facility, in 2016. This plan provided a general overview of winter-run chinook reintroduction to historical habitats in the study area. Reclamation prepared a preliminary draft environmental assessment in 2017 as part of the planning process to evaluate and disclose potential environmental effects association with the fish passage evaluation projects’ implementation of a pilot study to assess the feasibility of the reintroduction of chinook in tributaries above Shasta Lake.

The federal agency also is conducting work regarding adult fish passage, such as the proposed Fremont Weir Adult Fish Passage Modification Project. This project is intended to improve fish passage by modifying an existing fish ladder and improving fish passage within the channel both upstream and downstream of the Fremont Weir.

The weir is located in the northern portion of the Yolo Bypass, which provides valuable rearing habitat for downstream-migrating juvenile salmon while also providing a fish migration corridor for adult anadromous fish. Reclamation says structures within the Yolo Bypass have delayed and prevented adult special status fish species – such as chinook, steelhead and green sturgeon – from migrating upstream through the bypass and returning to the Sacramento River.

In addition, Reclamation, PacifiCorp and the National Fish and Wildlife Foundation announced in early May they were seeking applications for funding to implement coho habitat restoration projects within the Klamath River and its tributaries downstream of PacifiCorp’s Iron Gate Dam, which impounds water for an 18-MW hydro powerhouse.

The U.S. Army Corps of Engineers also is performing significant work to improve fish passage at its dams and hydropower projects. One situation requiring significant work is the sea lion “problem” at the 1,242-MW Bonneville facility. Bonneville, being the first dam on the Columbia River once fish leave the ocean, experienced a far lower run of spring chinook salmon in 2017 than predicted, and preliminary data indicates that high numbers of sea lions in the tailrace may have killed a large portion of this run.

The Corps estimates that about 5,000 adult salmon and steelhead were consumed between January and the first week of June, and 82% of these were spring chinook. The sea lions also were observed killing white sturgeon and lamprey at the dam, but in much smaller numbers. The Northwest Power and Conservation Council says state researchers estimate that about 20% of the spring chinook run is lost to sea lions, while another researcher estimates as much as 45% of the spring chinook run disappeared in 2016, with much of that loss likely attributed to sea lions. The sea lion impacts are an ongoing problem the Corps continues to work to address.

The Corps awarded a contract in August 2016 to construct the Lamprey Passage Structures Washington Shore Fish Ladder at Bonneville. The work included construction of new lamprey passage systems and modifications to the existing systems, taking them from research-grade to a permanent installation.

And in 2016, the Corps conducted fish passage research in its Foster Reservoir. The Corps modified the spring refill at this reservoir for three consecutive years to help attract migrating juvenile fish to a weir located in one of the dam’s spillway bays. The fish weir operations are part of ongoing research to determine how best to operate Foster Dam to improve the survival of spring chinook, winter steelhead and other fish species in the South Santiam River Basin.

The research has revealed new details about run timing, distribution of fish in the reservoir and preferred passage routes through the dam. The Corps plans to use these research results to aid decisions about long-term operation of the dam for fish passage.

This work is part of a larger effort, called the Willamette Basin fish program, intended to deal with a loss of habitat necessary to support the historically large number of salmon, steelhead, Oregon chub and bull trout in the basin. The 13 dams in the Willamette Valley Project block access to significant amounts of high-quality fish spawning and rearing habitat and prevent movement of sediment and large wood. They also have degraded downstream habitat by altering seasonal flows and water temperature patterns that are important for fish.

The Corps operates 74 hydroelectric plants with a total installed capacity of 20,474 MW.

Several utilities are trying out unique approaches in their efforts to move fish past dams. Public Utility District No. 1 of Snohomish County in Washington provides a great example, with its installation of a volitional fish passage structure. In fact, this work won Snohomish County PUD a 2017 Outstanding Stewards of America’s Waters award from the National Hydropower Association in the category of recreational, environmental and historical enhancement.

This fish passage was installed in conjunction with its 111.8-MW Henry M. Jackson Hydroelectric Project. The passage, at the City of Everett’s Diversion Dam on the Sultan River, was one of the proposed license articles from the Federal Energy Regulatory Commission during project relicensing. Its intent was to provide passage to additional fish habitat upstream on the river when and if it is needed based on biological monitoring and triggers, with a goal of increasing salmon and steelhead production.

The approach is unique in that it involved cutting through the dam and excavating down to the river’s historic bottom elevation to create a gated structure through which the river flows. Fish can migrate upstream or downstream through the dam without changing their elevation in the water column. New salmon redds have been discovered more than 5 miles upstream from the dam, signaling success of the work.

Other companies are willing to accept trade-offs to ensure adequate fish passage. Eugene Water & Electric Board has begun a US$100 million rehabilitation and modernization project at its 114-MW Carmen-Smith facility on the upper McKenzie River that will include improvements to facilitate fish passage. Among these is an agreement to no longer generate electricity from its 10.5-MW Trail Bridge powerhouse, in exchange for more cost-effective, less intrusive fish passage.

An important point of the negotiation for this facility was the fact that “the proposed settlement agreement establishes fish passage using an adaptive management approach rather than facilities that are constructed to meet specific criteria established by the Federal Agencies,” according to Resolution 1629. EWEB will design, construct and operate fish passage facilities in consultation with and approval by the federal fish agencies, Forest Service and FERC. If EWEB is unable to show that those facilities are operating in a manner that meets the fish passage standards required in the settlement agreement, EWEB may be required to modify the passage facilities or operations to improve fish passage.