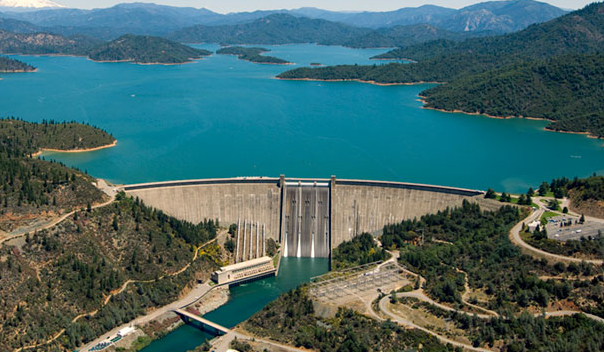 The future of a proposal to raise California’s Shasta Dam by as much as 18.5 feet is once again in question, following the release of two reports by the U.S. Bureau of Reclamation earlier this week.

However, the final feasibility report, which examines raises of six height increments, notes that the proposals’ price tags of between $990 million and $1.28 billion remove the potential for full federal funding due to “unrealistic” expectations that the costs could be repaid through water and hydroelectric power sales in the 40-50 year time frame usually given for such infrastructure projects.

Trout found in the McCloud River above Shasta Dam add an additional caveat to the proposal’s funding, with their protected status removing the State of California’s ability to help fund the raise as well.

Project financing would likely then fall to a combination of agricultural, municipal and industrial partners who would benefit from the increased storage capacity in Shasta Lake, though the long-time proposal has seen opposition from those whose residential and commercial properties might have to be relocated to accommodate higher water levels.

“California’s voters spoke loudly last year in support of investment in water infrastructure, but ensuring that local residents, businesses and infrastructure are given proper consideration is key,” state Rep. Doug LaMalfa said in a statement.

Proposals to raise Shasta Dam have lingered since at least 1980, when Congress authorized preliminary environmental and feasibility studies.

The 602-foot-high structure was completed in 1945, at which point it trailed on Hoover as the United States’ tallest dam.

The site is also home to the 633-MW Shasta hydroelectric plant, whose five generating units underwent a number of rehabilitations within the past decade.